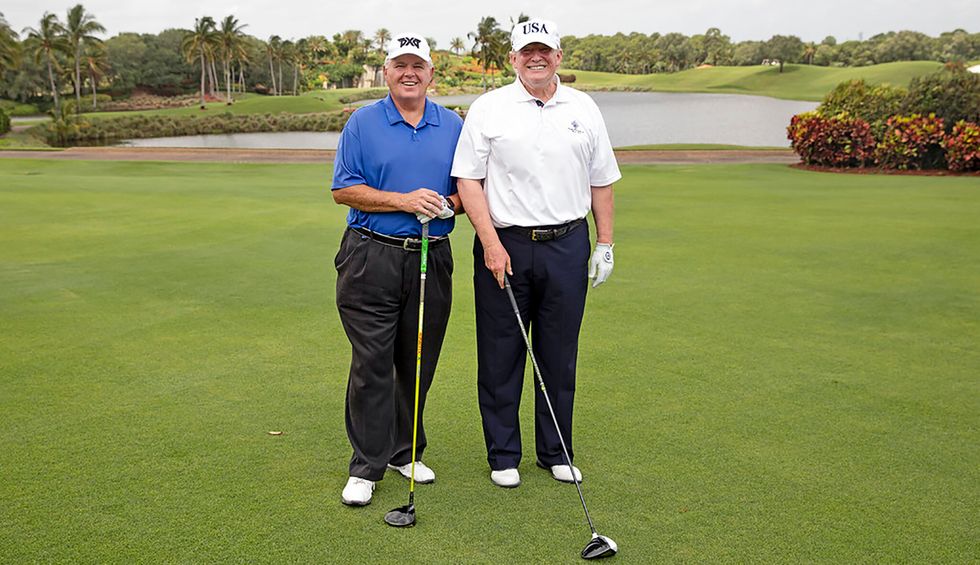 Never let it be said that Donald Trump lets a little ignominy and disgrace get in the way of a good time and money in his pocket.  Last Wednesday he became the third president in American history to be impeached. By Saturday he was throwing down at the Mar-a-Lago Studio 54 Party, alongside his lawyer, Rudy Giuliani. It must have been reminiscent of the good old days when Trump and his former lawyer Roy Cohn used to frequent the famous New York club on 54th Street in its 1970s heyday, only this time around Mick Jagger and Andy Warhol were replaced by war criminal Eddie Gallagher and evangelical leader Franklin Graham.

These parties seem to be a regular theme at Trump's Palm Beach club. Back in February of 2018, he had to make an official visit to see some first responders and Parkland shooting victims at the Broward County sheriff's office, but then he and Melania hightailed it out of there to, yes, a Studio 54 party at Mar-a-Lago. Perhaps he finds these shindigs comforting when he's feeling stressed. Or maybe he just enjoys remembering how he cost the owner of Studio 54 and his investors a million dollars once by failing to disclose that a property he had sold them was in bankruptcy. Life was much simpler when all he had to worry about was outrunning frustrated bankers and angry women. Now he's trying to outrun the U.S. Congress and the verdict of history, which is undoubtedly not quite as much fun.

Trump didn't bother meeting any boring gun-violence victims before the party this year. Instead, he appeared at a big gathering of the Trumpen Youth at the Turning Point USA yearly meeting.  Giuliani had warmed up the crowd the day before with a new call and response:

Giuliani said, “this is why they don’t like what I’m doing in Ukraine. Because you know who was making big bucks in Ukraine?”

I think we can assume we'll be hearing that one again.

Trump himself was introduced by none other than Rush Limbaugh, who captured the hearts and minds of the young people in the audience with a very important message:

They all believe him, I'm sure. And that's very sad. That cynical fiend (who knows better) will be long gone and their kids will pay the price.

Then Trump took the stage and gave his standard Festivus airing of grievances, whining and wailing about the impeachment and the unfairness of everything, especially the scourge of — wind?

I'm not sure what that digression was all about but if I didn't know better I'd think someone slipped something hallucinogenic in his Diet Coke.

After that strange little trip to Mars he dashed back to Mar-a-Lago to hang out with his most ardent fans:

The president of the United States spending Christmas with a war criminal makes you feel all roasting-chestnuts warm inside, doesn't it?

According to Gallagher's wife, he gave Trump "a little gift from Eddie's deployment to Mosul." I don't even want to think about what it might be. I doubt it was something he picked up in the airport gift shop.

Rudy Giuliani was photographed at the party having too much fun with his phone:

I hope for Rudy's sake he hadn't butt-dialed a reporter again or confessed to more crimes. Trump reportedly only chatted with Giuliani briefly at the party, but one wonders whether the president suggested he lay off the Limoncello for awhile. It's not a good look to constantly create new evidence of conspiracy and corruption right in the middle of the impeachment process.

After the big brouhaha over the evangelical magazine Christianity Today calling for Trump's removal from office, the president no doubt felt comforted by the presence of Jerry Falwell Jr. at the Studio 54 bash.

Falwell also reportedly said that impeachment was the Democrats Pearl Harbor, so that's a really disturbing mash-up of historical analogies. You can always count on the Christian right to be filled with the spirit of Jesus at Christmas time.

The party doesn't appear to have been quite as much fun as those wild Mar-a-Lago bashes with Jeffrey Epstein back in the day. But it had something going for it that those parties didn't — taxpayer money funded a huge part of it, with the rest is paid for by rich people willing to pay for play with the president of the United States. Huffington Post reports:

President Donald Trump has pushed his taxpayer-funded golf tab past $118 million on his 26th visit to Mar-a-Lago, his for-profit resort in Palm Beach, Florida, with a Saturday visit to his course in neighboring West Palm Beach. The new total is the equivalent of 296 years of the $400,000 presidential salary that his supporters often boast that he is not taking.

And of that $118.3 million, at least several million has gone into Trump’s own cash registers, as Secret Service agents, White House staff and other administration officials stay and eat at his hotels and golf courses.

The exact amount going into Trump’s pocket cannot be determined because the White House refuses to reveal how many Trump aides have been staying at his properties when he visits them and the administration will not turn over receipts for the charges incurred.

Again, that doesn't count all the big spenders who line his pockets by staying at his hotels or buy memberships for the chance to curry favor.

Recall that the Republicans were hysterical about the cost of Obama's official and unofficial travel and Trump relentlessly ragged on him for playing golf too much, even though Obama did so almost exclusively at local military bases. Trump plays more golf than any president in history — and insists on his own courses so he can pocket the revenues himself.

And of course the president is celebrating Christmas by having the taxpayers and his rich friends foot the bill for this year's decadent throwback celebration at his private Florida clubhouse. What could be a better Christmas gift than that? Just because he's been impeached doesn't mean he has to pass up a payday.