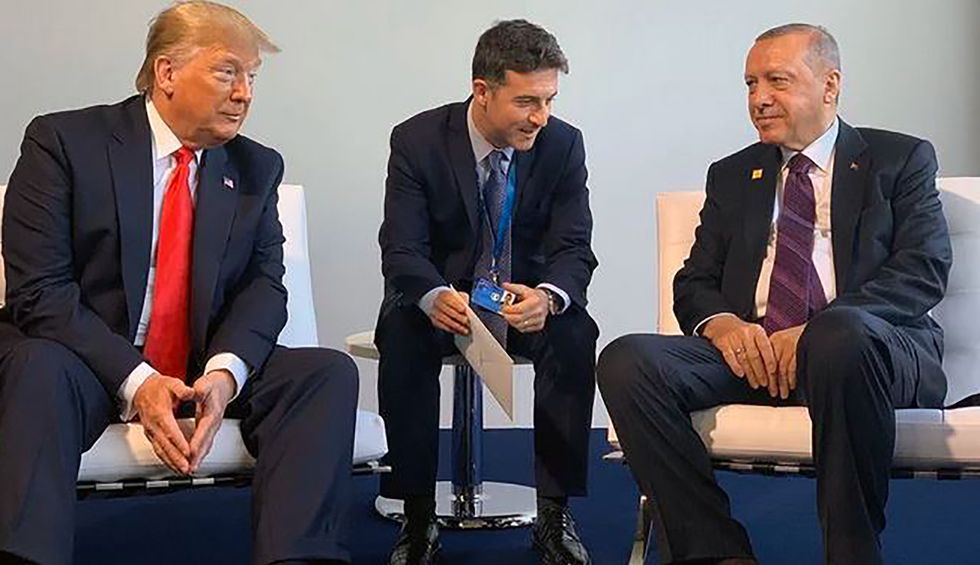 President Donald Trump held an undisclosed meeting Wednesday with Turkish President Recep Tayyip Erdoğan during this week’s NATO summit. While Turkey is a member nation of NATO, President Erdoğan is widely seen as a dictator for whom President Trump holds a special fondness.

The meeting had not appeared on President Trump’s official schedule, nor did the White House announce it later, until the Turkish government posted a photo of the two leaders in a tweet.

Reuters reporting that Trump and Erdogan have held an unscheduled meeting on the sidelines of the NATO summit here… https://t.co/3ZWB02PjnP
— Mark MacKinnon (@Mark MacKinnon) 1575464830.0

After the photo was released the White House put out a statement saying Trump met with Erdoğan to remind him of “the importance of Turkey fulfilling its alliance commitments.”

Trump met with Erdoğan at the White House last month.

The Hill reports White House deputy press secretary Hogan Gidley, while confirming the meeting, “did not describe the meeting either as a full bilateral meeting or a pull-aside at the summit, nor did he confirm reports that the meeting lasted a half hour.”

“Pull-asides,” when two or more leaders casually chat on the sidelines, are not uncommon during summits like NATO. This meeting did not appear to be one.

This is far from the first time a foreign power has been the first to reveal Trump met with their top leaders. For example, in May of 2017 President Trump secretly met with the then the Ambassador of Russia to the United States, Sergey Kislyak, in the Oval Office. Kislyak is seen by U.S. Intelligence as a top spy and spy recruiter.

During that now infamous meeting Trump disclosed classified information, leading to an international scandal. The White House had barred all U.S. reporters from the meeting but a photographer for Tass, the official Russian news agency, was present. Tass later published the photos.