The evangelical meeting that convinced Trump he is the Chosen One, and why I believe it to be true 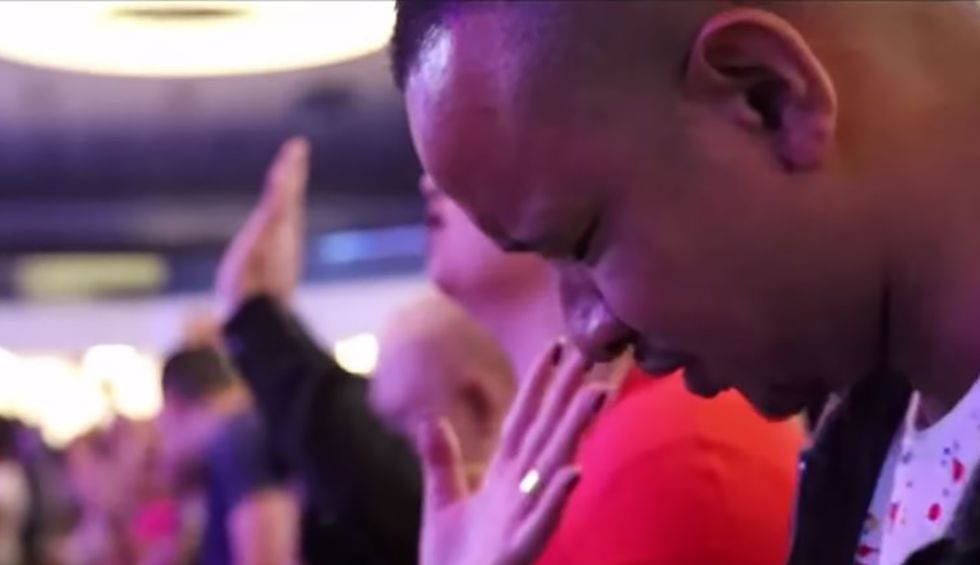 No matter how hard the rightwing media is trying to spin the upcoming Evangelicals for Trump rally in Miami as a good thing, everyone outside the cult knows it’s a scream of panic.  I can’t describe how desperate this all is: it would be like Hillary Clinton forced to hold a “Feminists for Hillary” rally. If you don’t have your base locked up by now, you are in real trouble. You can always sense Trump’s desperation by the quality and quantity of his tweets.  (Lots of misspellings, strange capitalization, tons of retweets, and healthy doses of “!!!!!!!!!!!!!!!!!”)

The latest twitterstorm was brought to you by the good folks at Christianity Today, which helpfully pointed out to stupid people that Trump is 1) guilty and 2) the antithesis of Christianity. This was soon followed by an editor quitting the Christian Post over pro-Trump propaganda. Trump is mortified because he cannot afford to lose even a little bit of the evangelical vote for 2020 since they make up a core of his coalition. It’s the entire reason Trump picked the well-hated Mike Pence for his ticket.

Although there are several evangelicals who are, pardon me, starting to “see the light,” many of them can’t budge, no matter what. These are the ones we need to discuss. Partially, these lost souls can’t move because of the “Sunk Cost Fallacy” and are not capable of extracting themselves out of this very bad situation. Others, however, have deceived themselves that this obviously evil man is the Second Coming—which, by the way, Trump literally tweeted about himself.

It wasn’t all that long ago that self-professed Christians were horrified at having their flag-bearer be Trump. What changed? If you are looking to point fingers, it can be traced, according to Rolling Stone, to a meeting with Trump and several mega-Church/televangelist con artists near the end of September in 2016.

The meeting and other events like it, spread the word, sending radio talk-show hosts and pastors and educators out into the world to preach the gospel of Donald Trump.

They didn’t just promote Trump to their flocks, but they spread the false message that Trump was divinely chosen—“ordained” even. In return, Trump was to do their bidding in a way no president had before. Trump was to give them everything.

And do their bidding the puppet-god did: he fought and repealed discrimination laws, fought the contraception mandate, fought to take money from the public and put into private Christian schools, and argued that churches should get tax-exempt status even if they promote the GOP from the pulpit.  Most important to them, however, is that he would reshape the judiciary in their image. Trump and Mitch McConnell would pick severely unqualified, rightwing judges to cement their power.

In return, Trump received, as Tony Perkins put it, a “mulligan” for his serious transgressions. He would be a god-king, and their flocks would be told to treat him as such. Sickeningly, they followed through on this. Jerry Falwell Jr. said it is “immoral” to oppose Trump. Franklin Graham said any opposition comes from “the Devil and his kingdom of darkness”. (So it’s the Devil who wants the migrant children freed from cages in disease-ridden conditions?)

James Dobson excused Trump’s behavior because he is a “baby Christian”. But the worst one is Paula White, who has an official role in the White House as an adviser to the president’s Faith and Opportunity Initiative in the White House’s Office of Public Liaison. Like many of these con artists, she preaches that the gospel is about attaining wealth and power in a twisted interpretation of Scripture known as the “Prosperity Gospel.”

White says the news media is “demonic” and those who oppose Trump “operate in sorcery and witchcraft”. Just like Trump, Paula is a grifter. She promised quid pro quo to her followers: if you give her two grand, you will get a vision from God. Cash or charge? She’s the worst of the worst.

The problem is that many weak-minded followers believe this to be true. There is literally nothing Trump can do to convince many evangelicals that he is evil. They openly call for him to be a dictator.

To some, he is even greater than Jesus:

"Let me tell you," he continued. "If Jesus Christ gets down off the cross and told me Trump is with Russia, I would tell him, hold on a second, I need to check with the president if it is true. That is how confident I feel in the president."

I can’t argue logic with them, although it’s fun to try. When they tell me I shouldn't ever question our “ruler,” I remind them that they never said that when Obama was president—and his victory was unquestionably legitimate. Using their stupid logic, you would have to also admit that the Founding Fathers were all sinners for revolting against King George. He was not just the ruler, but Great Britain decreed that all of their kings spoke for God.

No, the argument I use with them isn’t logic, but religion. When they tell me that they believe Trump is divinely inspired, or even “the Chosen One”—and they do—I agree with them. However, the Bible speaks of the Chosen One in two contexts. The first is the Messiah. But there is another, which is prophesized by several of the apostles in the New Testament.