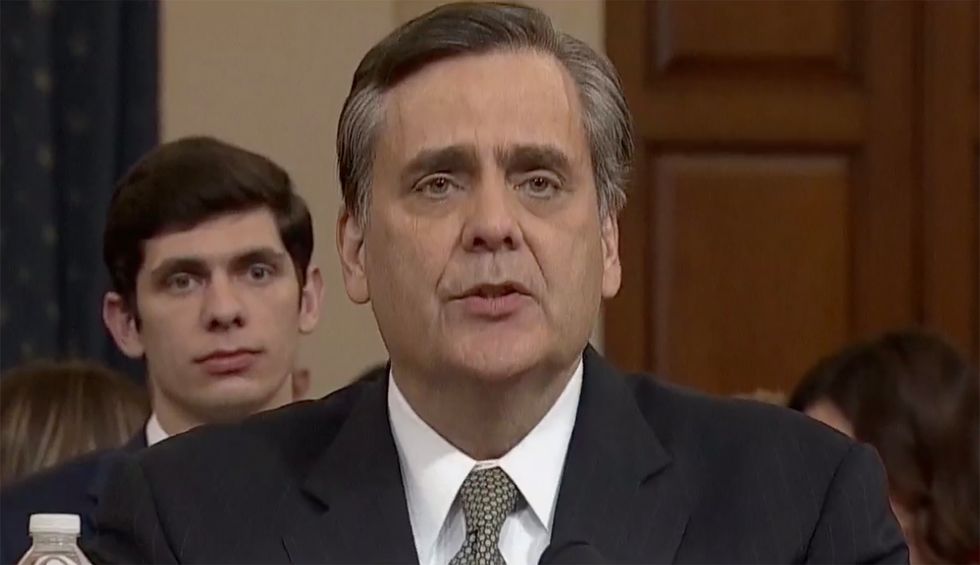 In his opening statement emphasizing the importance of legal standards, George Washington University constitutional law professor Jonathan Turley claimed that impeaching, “a president on this record would expose every future president to the same type of inchoate impeachment” and warned, “I hope you will consider what you will do when the wind blows again perhaps for a Democratic president.”

In making this argument, Turley might just as well have argued that the founding patriots should not have declared independence because once they were in power, the people might declare their independence from them.  The founding patriots, after all, were not asserting a codified legal standard in declaring their independence, they were asserting their political power.  The source of the people’s political power sufficient to overthrow codified law, the Declaration itself announced, was not the written codes authored by human beings, but the “self-evident” truths describing natural law.  Faced with Turley’s argument, our founding patriots might well have said, “If we, as governors of the people, deserve it, let the people declare their independence from us.”  Indeed, Thomas Jefferson famously welcomed such exercise of the people’s authority under natural law to assert their political power when he said, “The tree of liberty must be refreshed from time to time with the blood of patriots and tyrants.”  But Jefferson and the other founding patriots were also wise enough to allow for a process that would avoid the need for such bloodshed in the assertion of the people’s authority and power under natural law to remove an illegitimate government.  They gave us impeachment.

Turley’s “turn-about is fair play” gambit is in fact nothing more than, what I must sadly label, the despicable false relativism plaguing our public debate that mischaracterizes every argument as nothing more than opinion, with each side in a dispute entitled to equal respect as though each were equally legitimate.  This ploy is nothing more than a defense of the double-speak George Orwell warned about in his dystopian novel, 1984, and which we see everywhere today proclaiming that what is false is true, what is real is fake, what is war is peace, and what is an exercise of authority under natural law is a violation of the people’s rights.  Sadly, Professor Turley has become just such a doublespeak mouthpiece.

Nothing more clearly demonstrates this doublespeak than Professor Turley’s own remarks to congress in the impeachment proceedings against President Clinton in 1998.  Whereas yesterday Turley warned of the threat to our political process if the House impeached President Trump, in 1998 he made quite clear that the most profound influences on his thinking about impeachment as a constitutional law scholar, Benjamin Franklin and James Madison, regarded congress as serving a vital accusatory role that posed no threat to our political process at all, but that, to the contrary, allowed no room for exceptions.  Turley testified:

… the founders wanted impeachment issues, serious impeachment questions to go to the Senate for resolution. … [The House of Representatives] has an accusatory function in a tripartite system that I hope you will not ignore. … It is your function to detect such conduct, to deter it by your voice of condemnation.  There is a censure provision in the Constitution.  It’s called articles of impeachment.  It’s where we define conduct that we find unacceptable for a president.  And when we do that, we don’t just define what a president is, we define something about who we are.  You don’t have to worry about what the President’s oath said, what he agreed to do.  It’s your oath that’s at stake.  You will define what we expect from a president. Regardless of whether the President is removed in the Senate, you will define it for future presidents.

Turley went on to emphasize:

I think the only thing that would bother Madison… is this view that we have such a fragile system, that the system is in danger by your decision.  The system will last this hearing.  The system will last this crisis. It’s lasted crises far worse than this. … The only thing that you can’t do in a Madisonian system is grant an exception. … What it does is it addresses factions, things that divide us, and it forces it into open and deliberative process where we resolve it instead of letting it fester and letting it divide. There is nothing more divisive, nothing more divisive, than an allegation that a president lacks the political and legal legitimacy to govern. That’s when the Madisonian democracy and the process is so important.  That’s why you can’t grant exceptions.  There’s a place where that decision is made.  It is that other body [the Senate].  Your function [in the House of Representatives] is to define conduct which we cannot tolerate, conduct that is incompatible with the President’s office.  Ultimately, it doesn’t matter if the President is removed.  That’s not a concern for this body. … You’ve got a more important function than the Senate.  Your function is to help define what we expect from future presidents.

One cannot review the stark self-contradiction in Turley’s 1998 statements and his statements yesterday without hearing the words of Stanford Law professor Pamela S. Karlan, who also spoke yesterday, and who expressed outrage while reprimanding Congressman Collins, saying, “Here, Mr. Collins, I would like to say to you sir that I read the transcripts of every one of the witnesses who appeared in the live hearing because I would not speak about these things without reviewing the facts.  So, I am insulted by the suggestion that, as a law professor, I don’t care about those facts!”  Just as Professor Karlan had a responsibility to review the transcripts of all the witnesses in the live hearing, Professor Turley had a responsibility to review the transcript of his own prior statements about impeachment before the House of Representatives and identify and respond to any inconsistencies between his current and past views.

Professor Turley never did so, even though the self-contradiction could not be more startling, and I cannot help but think Professor Karlan would be shocked by such an omission.  I certainly am.  Turley’s self-contradiction is all the more jaw dropping in view of his 1998 pro-impeachment argument relativistically setting as equal the political significance of all lies before a grand jury, whether they be about covering up a sexual infidelity or covering up a scheme to fix the result of a presidential election.  And yet, here is Professor Turley, in 2019, omitting to note to congress that he previously argued to congress that impeachment was not a threat to our political process and was, instead, an obligation no matter what the lie at issue might be. Incidentally, Professor Karlan’s assessment of the gravity of Trump’s misconduct was quite different than that of Professor Turley.  Professor Karlan fervently asserted that “everything I read on those occasions [when I reviewed each witness transcript] tells me that when President Trump invited, indeed demanded, foreign involvement in our upcoming election he struck at the very heart of what makes this a republic to which we pledge allegiance.”

But let’s get back to Turley’s false equivalence that argues that it is impossible to establish the superior legitimacy of one side or another and therefore the exercise of impeachment power at present may well invite an abuse of that power in the future against which the party exercising power now will then have no defense.  This is completely false.  The truth is the two sides in this and every political drama are not equal.  Defending the right side against the wrong side is extremely achievable by a free and sophisticated people like us.

On the right side are those who pursue a “more perfect union,” meaning a more perfect political and social equality and a more perfect democratic political process.  On the wrong side are those who seek to concentrate wealth and power through reliance on authoritarian oppression by an oligarchy. The United States of America has never had a more striking example of an authoritarian oligarch sitting in the office of the President than Donald Trump.

The hard truth of politics that a free and sophisticated people like us need to master is that authoritarian oligarchs have throughout history shown themselves willing at every opportunity to undermine and violate the existing constitutional order of law in order to pull the nation into their tyrannical control.  In response to the authoritarian oligarchs’ fundamental commitment to overthrowing the foundations of political equality and democratic rule of law, the other group, whom we may call democratic egalitarians, are always trying to pull the nation toward a more perfect union from within the constitutional legal order. Unfortunately, faced with an enemy of democracy like the authoritarian oligarchs, it’s not enough to work within the legal order, especially when the legal order has been corrupted and rendered abusive under the authoritarian oligarchs’ control, as it has increasingly become today, as it was in the time of King George.  In such circumstances, democratic egalitarians find it necessary to disregard the rule of law for the sake of defending the principles underlying the law and advancing and perfecting them in order to protect them against the ever increasingly sophisticated corruption and violence of the oligarchic authoritarians.

We don’t need Professor Turley’s hand-wringing performance to scare us away from defending our democracy through the exercise of our political power to hold an oligarchic authoritarian accountable.  Exercising our accountability muscle will make a stronger, not weaker in the future.  It will make us more familiar with the source of our political authority and power and will protect us against further abuses in the future, not make us vulnerable to them, as Professor Turley suggests.

President Trump needs to be impeached for his shocking and multi-dimensional misconduct.  But the people need him held accountable for another reason: We need him held accountable to reconnect with the underlying authority on which our democracy is based and to start cleansing our society of the noxious false relativism infecting our public debate, such as we witnessed yesterday in Professor Turley’s performance.

Hank Edson is an author, activist and attorney based in San Francisco. He is the author of The Declaration of the Democratic Worldview (Democracy Press, 2008).