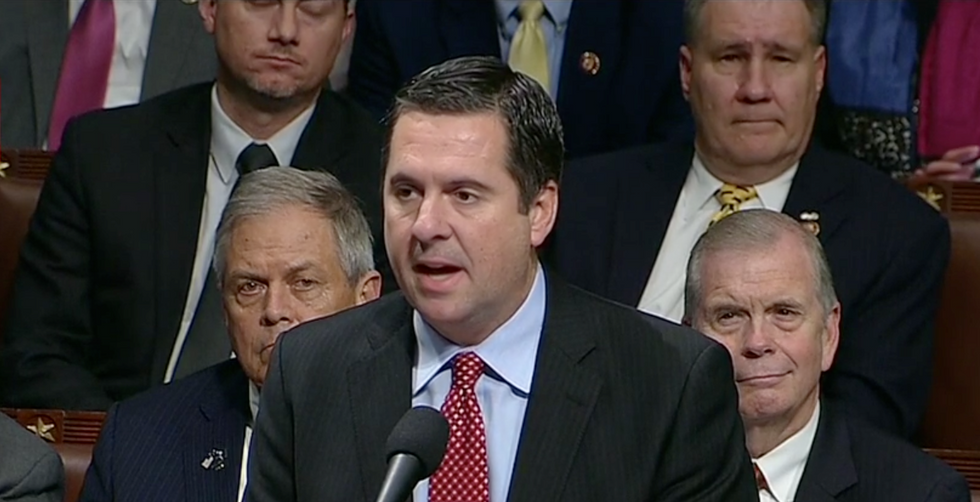 When President Donald Trump's defenders aren't simply lying about the House impeachment inquiry -- it all happened in a Capitol Hill basement with no Republicans present, as one of his lawyers told National Public Radio -- they complain about the lack of firsthand witnesses to presidential abuse. They assume nobody will notice that Trump himself forbid any testimony by those with the most direct knowledge of his attempts to extort Ukraine.

For some reason, his defenders don't regard his silencing of potential witnesses as an admission of presidential guilt. Instead, they eagerly join him in presenting the nation with an insoluble dilemma: Impeachment can't be considered serious or fair without direct fact witnesses -- and there can be no direct fact witnesses because the president has every right to squelch them.

In this way, the Republicans have abdicated their constitutional responsibility to oversee a president run amok. Their craven posture assures Trump that he can do whatever he wants, just as he has declared, while they exempt him from the rule of law.

Imitating the coarse example of their political boss, Republicans are increasingly brazen in expressing contempt for the Constitution. That document mandates a Senate trial following impeachment by the House, which doesn't mean a sham tribunal or an instant dismissal. Moreover, according to Article I, Section 3 of the Constitution and the Senate rules, every senator is mandated to "swear or affirm" an oath to do "impartial justice" in any impeachment proceeding.

On Fox News, McConnell said that he is plotting how to handle the trial with White House lawyers -- before he even begins to discuss the matter with Senate Minority Leader Chuck Schumer, D-N.Y. "Everything I do during this I'm coordinating with White House counsel," he brayed. "There will be no difference between the president's position and our position as to how to handle this to the extent that we can."

As for Graham, he told an audience in Doha, Qatar, that his aim is to ensure the impeachment "dies quickly," without any annoying examination of facts or witnesses. "I am trying to give a pretty clear signal I have made up my mind," said the same man who once demanded, when he managed then-President Bill Clinton's impeachment trial in 1999, that every senator keep an open mind. "I'm not trying to pretend to be a fair juror here," he added in further self-indictment.

Presumably, Graham and McConnell intend to swear the required oath with a premeditated intent to violate it. Evidently, they're eager to bring fresh dishonor on themselves and their institution.

It is still possible that Chief Justice John Roberts, who will preside over the impeachment trial as prescribed by the Constitution, will assert the Constitution's primacy over the partisan chicanery of the Senate Republican leaders? Roberts could insist that the Senate hold a real trial, with actual witnesses (including Rudy Giuliani, acting White House chief of staff Mick Mulvaney, former national security adviser John Bolton and others who have direct knowledge of Trump's misconduct). And if he hopes to maintain his reputation as anything other than a right-wing stooge -- and stand up against the constitutional vandalism of his fellow Republicans -- that is what he must do. We may soon see what he is made of and whether he is up to this historic moment.

Rules and clauses aside, the great majority of Americans of all political persuasions understand fairness when they see it -- and most of them still have enough sense to detect a political fix, too. Polls show that even Republicans agree overwhelmingly that impeachment requires an actual trial, with evidence and witnesses. If McConnell, Graham and the Republican Senate foist a rigged proceeding on the public, they will risk a furious rebuke next November.