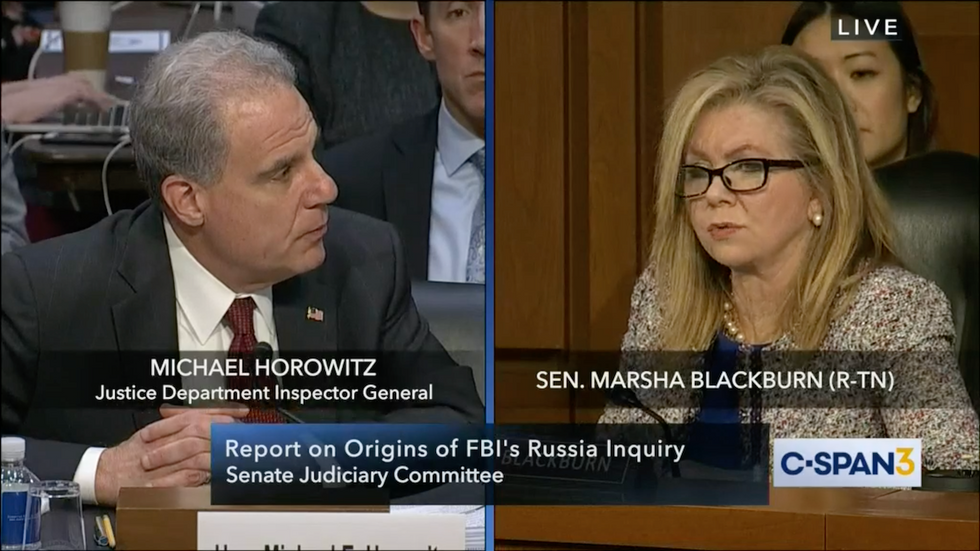 Senate Republicans used the testimony of Justice Department Inspector General Michael Horowitz this week to expound on President Donald Trump's conspiracy theories about the 2016 election, despite the fact that his new report deflates most of their arguments.

By focusing on Trump's unfounded theories, the GOP is actually missing the most important revelation from Horowitz's report — which is, indeed, a crucial document for the American people to understand.

Because while Horowitz found no evidence to support the idea that the FBI acted out of bias toward Trump in opening up properly predicated investigations of four associates of his campaign, the report does shed light on a disturbing pattern of behavior in surveillance Carter Page. Page, who served in a minor role for the campaign, had ties to Russia and was subjected to investigation under the Foreign Intelligence Surveillance Act, which has to be approved in a secret court process. In applying for the Page surveillance, the FBI reportedly made many misrepresentations and omissions to the court that made the case against him seem stronger than it was.

This is a frightening finding about the FISA process. But Republicans have argued that it shows political bias toward Trump and his campaign. If that were true, it would be a serious finding that needs to be addressed.

But is it true? During Horowitz's Senate testimony, Sen. Marsha Blackburn (R-TN) appeared to try to elicit information that would bolster the case that there was a political "witch hunt" against Trump. She asked: "How often do you find mistakes in a FISA application?"

"This is actually the first time my office had a deep dive into a particular application," Horowitz said. "We've done higher-level reviews on the FISA process and have found various issues at a higher level. But this is the first time we've actually been able to delve in, in this way, to a FISA."

Blackburn then gave the answer it seemed she was expecting to receive.

"Let me put it this way," Horowitz interjected. "I hope so."

"If it's not an unusual occurrence, there are more cultural than you know about at the FBI, correct?" Blackburn asked.

It was a stunning exchange and a major revelation. It's actually impossible to know how severe or "unusual" the gross missteps in the Page FISA application were because Horowitz hasn't conducted a similar review of any other process. For all we know, the Page application could have fewer faults than the average application.

There are two important points here. The most important is that it seems FISA applications haven't received nearly enough oversight if Horowitz is merely "hoping" that the Page process is an outlier. This is especially true since Horowitz acknowledged he has previously found issues with the process at a higher level. We should expect a secretive process that violates the privacy of American citizens would receive more thorough scrutiny on a regular basis. But the U.S. Congress and Republicans especially have been generally unconcerned and in fact supportive of the growth of the American surveillance state since 9/11. The fact that they're only concerned about it now because it impacted Donald Trump is the height of hypocrisy.

The second point is that, given our lack of knowledge about the nature of other FISA applications, it's very hard to deduce much about the motivations behind the errors in the Page process. Republicans want to leap to the conclusion that it all comes down to anti-Trump bias, but the failures in process could be routine.

Even if they're not routine errors, though, they could have less egregious, if not acceptable, explanations. Crossfire Hurricane, of which the Page investigation was a part, was a sprawling, complex, urgent, and fraught probe on a tight timetable in the run-up to the 2016 election. Agents working on the case may have felt that these conditions necessitated decisive and aggressive action even without being motivated by animosity toward Trump. And the fact is that, as everyone acknowledges, Page was a fairly minor figure in the Trump campaign, and he was only surveilled after he was uninvolved with the candidate. Trump himself wasn't under investigation, and Michael Flynn and Paul Manafort — two much more significant figures in the campaign — weren't surveilled at all, Horowitz found. George Papadopoulos, the person who's actions first launched Crossfire Hurricane, wasn't surveilled either, even though, according to Horowitz, members of the investigative team wanted to. And the investigation remained largely under wraps through Election Day, even as FBI Director James Comey went public with an investigation into Hillary Clinton. This pattern of facts doesn't really suggest an FBI hellbent on taking down Trump, despite the apparent serious violations in the Page surveillance.

The focus really should be on how and why law enforcement can get out of control — and what can be done to restrain its abuses.