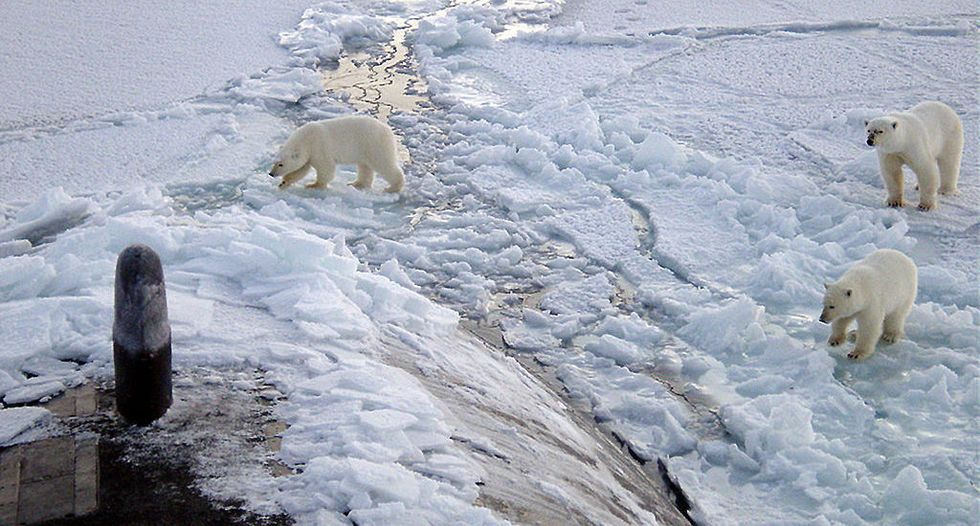 In addition to warning that "the feedback to accelerating climate change may already be underway," the U.S. government's latest report on conditions in the Arctic reveals that temperatures in the region are persistently warming, leading to land and sea ice melting, permafrost thawing, species being threatened with extinction, and putting Native communities at risk.

The National Oceanic and Atmospheric Administration on Tuesday published its 14th annual Arctic Report Card (pdf), which warns that "the Arctic marine ecosystem and the communities that depend upon it continue to experience unprecedented changes as a result of warming air temperatures, declining sea ice, and warming waters."

"The Bering Sea, in particular, has experienced unprecedented declines in sea ice over the last two years, with resulting changes in algae growth to include observations of the presence of harmful algal blooms," Clark University polar scientist Karen Frey, lead author of one of the report's chapters, said in a statement.

Erich Osterberg, a Dartmouth College professor who has studied glaciers, told PBS NewsHour that "I think the headline from this report is that the Arctic is in real trouble. If this were an annual health check-up, I think we'd have to say that the Arctic is chronically sick and getting worse. 2019 was a particularly bad year for the Arctic."

Osterberg, who did not contribute to the report, highlighted that this year saw the second-warmest average annual land surface air temperature on record, which led to significant sea ice loss in the Arctic Ocean and melting of glaciers on Greenland—both of which cause sea level rise.

NOAA's new report is made up of 12 essays written by an international team of 81 researchers from 12 countries. An independent peer review was organized by the Arctic Monitoring and Assessment Program of the Arctic Council.

"It's a really sobering report, but I have to say it's not a very surprising report," said Osterberg, "because this is a continuation of the trends that we've been seeing happening in the Arctic for quite a few decades now as climate change has gotten worse."

Alongside the report, NOAA published a short video which explains that "unprecedented warming and exceptionally low levels of sea ice are imposing dramatic, rapid, and disruptive change on marine ecosystems in the far north," including a "cascade of impacts on the marine food web."

"Changing growing conditions, including warmer summers, decreasing snow cover, and permafrost instability lead to alterations in the vegetation of the Arctive landscape. This can strongly affect habitat for caribou, birds, and other wildlife, putting further pressure on northern ecosystems and communities," the video details. "Indigenous communities along the Bering Sea are on the front lines of climate change. As sea ice disappears, so does hunting access to seals, whales, whales, and other marine life."

Bering Sea Elders Group executive director Mellisa Johnson, who edited a chapter of NOAA's report, spoke with InsideClimate News about dead or dying salmon increasingly washing up on the shores over the past few years. She explained that "the seals, they don't want to eat those types of fish. They know they're unhealthy for consumption. So then they don't have enough fat reserves to last them."

The chapter that Johnson edited, which offers perspective from Indigenous voices, reads in part:

Our resilience as Indigenous Peoples comes from our close proximity to the food resources that we depend on. In a warming Arctic, access to our subsistence foods is shrinking and becoming more hazardous to hunt and fish. At the same time, thawing permafrost and more frequent and higher storm surges increasingly threaten our homes, schools, airports, and utilities. Our environment has changed, but we remain vigilant. By adapting as we always have, we continue to hunt, fish, and harvest from the ocean and land. But, we fear for our young people; we worry that they will grow without the same foods and places that we have known throughout our lives. Maintaining what we inherited from our elders and thinking about our future generations, we offer this report as a glimpse into what we are observing and experiencing at the locations of our eight communities in the Bering Sea region of Alaska.

Retired Navy Rear Adm. Timothy Gallaudet, deputy undersecretary of commerce for oceans and atmosphere at NOAA, led the news conference where the report was released Tuesday. In a statement, he underscored the importance of scientists continuing to track the conditions in the Arctic.

"The speed and trajectory of the changes sweeping the Arctic, many occurring faster than anticipated, makes NOAA's continued investment in Arctic research and activities all the more important," Gallaudet said. "We need the best scientific information to support NOAA's efforts to better understand how environmental change is affecting the Arctic and weather around the globe, to support adaptation and economic opportunities in the region, and to sustain our ocean-based Blue Economy."