Mick Mulvaney can run, but he can't hide 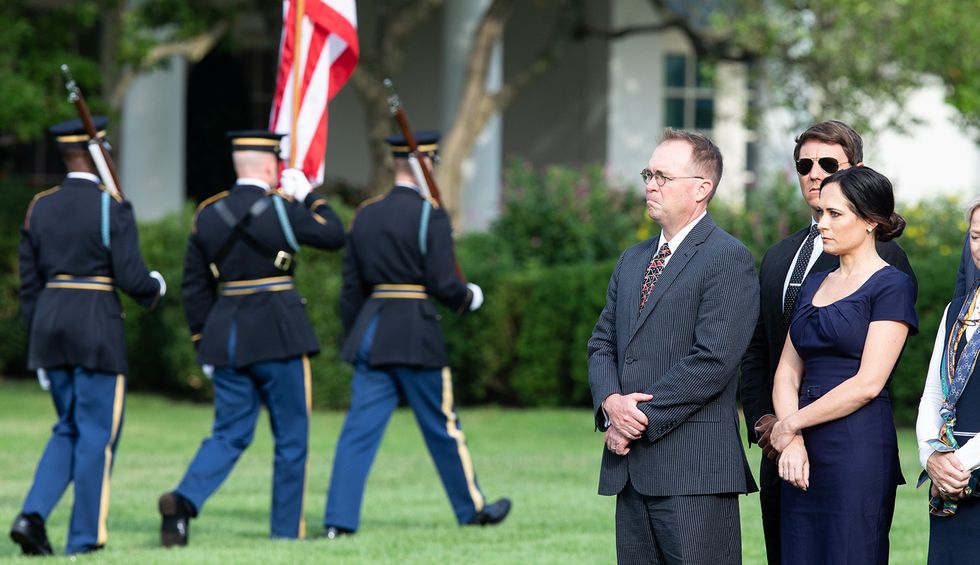 White House Chief of Staff Mick Mulvaney and White House Press Secretary Stephanie Grisham look on as the Color Guard prepares to post the colors for a moment of silence on the South Lawn of the White House Wednesday, Sept. 11, 2019, in remembrance of those lost on September 11, 2001. (Official White House Photo by Keegan Barber)
Amanda Marcotte
and
Salon
December 30, 2019

First, some good news: Donald Trump's acting White House chief of staff, Mick Mulvaney, seems to be sweating his own legal exposure in the Ukraine scandal, which suggests that the impeachment story is far from over.

To be clear, there's good reasons to despair that Trump or anyone in his administration will ever face real justice for the scheme to blackmail Ukrainian President Volodymyr Zelensky into publicly supporting debunked Trumpian conspiracy theories about the Democratic Party and specifically about former Vice President Joe Biden, the current frontrunner in the Democratic presidential primary. Senate Majority Leader Mitch McConnell has gleefully flaunted the fact that no amount of evidence of Trump's guilt will move Senate Republicans to convict him, or even to pretend to hold a real Senate trial.

And yet, the fat lady isn't singing. On Sunday, the New York Times published a lengthy investigative report on the six-week period during which Trump withheld military aid from Ukraine as part of his extortion scheme. In the typical New York Times fashion, the piece carries way too much Trump water by exaggerating the possibility that he had a non-extortionate purpose for his actions. But even that doesn't muddy the waters too much. The pattern of behavior shows not only that Trump was extorting Zelensky, but that he was directly and perhaps obsessively involved in running the scheme.

Reading between the lines of the (pretty much always) anonymously-sourced reporting from Eric Lipton, Maggie Haberman and Mark Mazzetti, it appears that Mulvaney is trying hard to get the story out there that he had no idea what Trump was up to, even though he was "a key conduit for transmitting Mr. Trump’s demands for the freeze across the administration," as the authors write:

Mr. Mulvaney is said by associates to have stepped out of the room whenever Mr. Trump would talk with [Rudy] Giuliani to preserve Mr. Trump’s attorney-client privilege, leaving him with limited knowledge about their efforts regarding Ukraine. Mr. Mulvaney has told associates he learned of the substance of Mr. Trump’s July 25 call [with Zelensky] weeks after the fact.

Which is to say, Mulvaney's associates are trying to claim he's innocent by telling reporters he didn't know why Trump was holding back aid, even as he was working around the clock to make sure that Trump's desires regarding the aid hold were fulfilled. It sure sounds like Mulvaney is setting up the possibility of throwing the president under the bus, by suggesting that he was simply following orders, and that Trump and Giuliani were the only people who knew why those orders were being issued.

This is preposterous on its face. That story rests on the premise that Mulvaney, Trump's top aide, had no curiosity about why his boss was bucking a legal requirement to release aid that would boost Ukraine in its conflict with Russia. Moreover, we're asked to believe that Mulvaney continued not to be curious, even though Trump was already under a cloud of suspicion for his enthusiastic support of Russia, a hostile foreign power that just so happened to have illegally interfered with the 2016 election on Trump's behalf.

But we don't even need common sense to be skeptical of this effort to paint Mulvaney as an innocent babe who was ignorant of his boss's motivations. After all, Mulvaney confessed, in public, that extortion was the point of withholding the aid.

On Oct. 17, as you may recall, Mulvaney gave a press conference where he referenced one of Trump's wackier conspiracy theories — the idea that Ukrainians conspired with Democrats to frame Russia for the election interference — and suggested that demanding that Zelensky publicly support that conspiracy theory was "why we held up the money".

What Mulvaney thought he was going to accomplish by saying that isn't clear. My theory is that he was hoping he could hoodwink the press into thinking the extortion scheme was merely about Trump's conspiracy theories regarding the last election, and not the conspiracy theories Trump hopes will help him win the next election. At that point in time, it was clear that Trump had been withholding aid to get political support from Ukrainian leaders, and Mulvaney seems to have been hoping he could shrink the size of the blast radius.

Instead, that move backfired. It only served to confirm that Mulvaney's understood why aid was being withheld — to compel Zelensky into doing Trump's political bidding. Indeed, Mulvaney spent much of that press conference instructing people to "get over it" because there "is going to be political influence in foreign policy." It was an effort to normalize Trump's extortion scheme, and it turned into a confession instead.

Mulvaney's "associates" referenced in the Times article are simply hoping that the short attention spans caused by our chaotic news cycle will cause people to forget that the chief of staff confessed on live TV less than three months ago. That bet isn't a bad one, because the Times' painstakingly credulous reporters repeat the claim that Mulvaney walked out of rooms where the extortion scheme was being discussed, while entirely failing to mention the Oct. 17 public confession.

But while the Times team has apparently forgotten that Mulvaney already told us 1) that the aid was withheld to extort Ukraine and 2) that he knew why that was happening at the time, the rest of us should not forget. The most likely explanation why Mulvaney's "associates" are spreading this story of his innocence is because he is considering his exit strategies and would like to walk away unscathed by the role he played in all of this. He should absolutely not be allowed to do that.

Nonetheless, the fact that Trump's acting chief of staff is trying to build his lifeboat suggests that there's at least still real fear in the White House that this is a sinking ship. McConnell's scheme to rush toward  a Senate acquittal without even pretending to hold a trial isn't going quite as smoothly as he might have hoped, because it gave Speaker Nancy Pelosi a reason to withhold the articles of impeachment from the Senate. Meanwhile, Trump keeps committing the very crimes he was impeached for, such as witness intimidation.

If Trump is successfully defeated and removed from office in the 2020 election — which is a big if, still — there will be a reckoning not just for Trump and Giuliani, but for all the players involved in this scandal. There will be a great deal of pressure from some quarters to let bygones be bygones and just pretend that multiple Republican officials weren't tied up in a criminal scheme to cheat in the 2020 election. If they aren't held accountable, they will keep doing this sort of thing, and will only get better at it with practice. So Mick Mulvaney can't be allowed to get away with playing innocent. Not a single one of them should.
Report typos and corrections to: feedback@alternet.org.