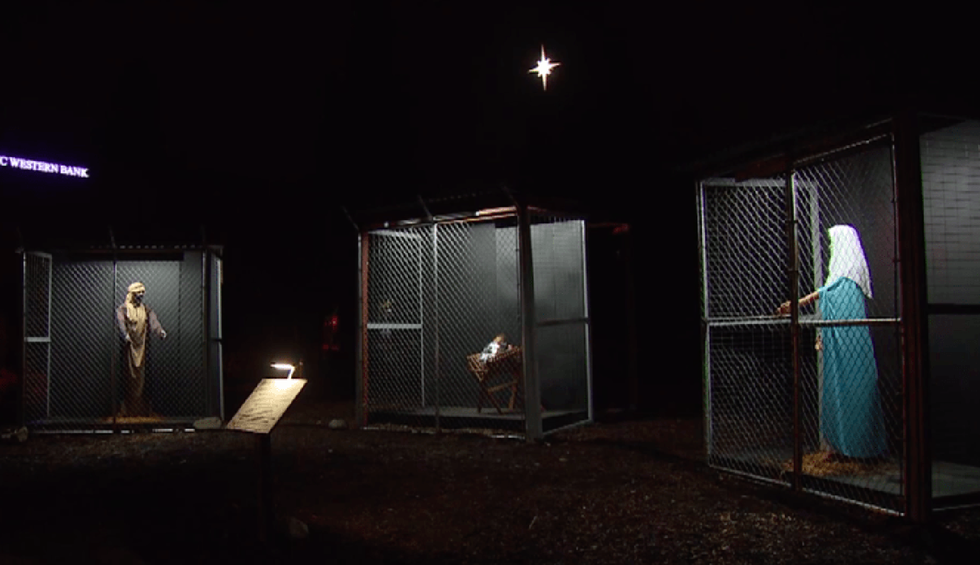 A Christmas nativity display outside a Methodist church in southern California features a separated and caged Holy Family, in direct criticism of inhumane administration policies that have included attacks on refugees and the forcible separation of thousands of asylum-seekers and their families at the southern border.

Karen Clark Ristine, senior pastor at Claremont United Methodist Church, originally posted a photo on her Facebook page depicting Jesus, Mary, and Joseph separated from one another and jailed in cages. Lining the top is barbed wire fencing. Mary and Joseph, on either side of Jesus, are both turned to him with arms outstretched, clearly longing to hold their child once again.

“In a time in our country when refugee families seek asylum at our borders and are unwillingly separated from one another, we consider the most well-known refugee family in the world. Jesus, Mary, and Joseph, the Holy Family,” the church said in a statement. “Shortly after the birth of Jesus, Joseph and Mary were forced to flee with their young son from Nazareth to Egypt to escape King Herod, a tyrant. They feared persecution and death. What if this family sought refuge in our country today?”

Claremont United Methodist Church, which has a history of pro-immigrant advocacy, then invokes the thousands of kids who have been torn from their families by the Trump administration since 2017. “Imagine Joseph and Mary separated at the border and Jesus no older than two taken from his mother and placed behind the fences of a Border Patrol detention center as more than 5,500 children have been the past three years. In the Claremont United Methodist Church nativity scene this Christmas, the Holy Family takes the place of the thousands of nameless families separated at our borders,” the statement continued. Churches across the nation have taken aim on the administration’s inhumane—and deadly—immigration policies for several years now.

Last year, St. Susanna Parish near Boston, Massachusetts, also depicted Jesus in a cage as the three wise men were separated from the Holy Family by fencing. A sign reading, “Peace on Earth?” hung above the display. “Is this what peace on earth looks like?” Father Steve Josoma asked at the time. “It’s hard to say we are a people of peace when we are sending soldiers with tear gas to stop people.”

While not a Christmas display, Christ Church Cathedral in Indianapolis, Indiana, held the Holy Family “in detention” during the height of media attention around family separation last summer. “Holy scripture is clear about how we are to treat people trying to find safety for their families,” Dean and Rector Steve Carlson said. “We are to show mercy and welcome them. Jesus, Mary and Joseph were homeless and fled danger to seek asylum.”