Matt Gaetz starts shouting in hearing and gets shut down with a gavel: 'You cannot simply yell out' 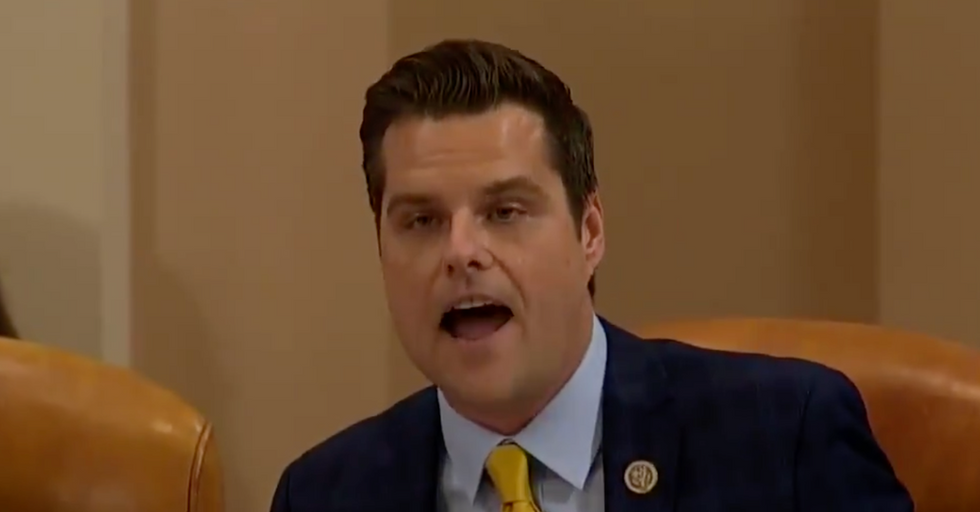 Republican Rep. Matt Gaetz of Florida began shouting out of turn on Monday during impeachment proceedings in the House Judiciary Committee, forcing Chair Jerry Nadler to pound his gavel and demand silence.

Gaetz was apparently infuriated with Democratic witness and counsel Daniel Goldman, who was presenting the findings of the Intelligence Committee's investigation of the Ukraine scandal. Goldman had raised the fact that Gordon Sondland, President Donald Trump's ambassador to the European Union and a key witness in the probe, had donated $1 million to the 2017 inauguration before receiving his appointment. Rep. Doug Collins (R-GA), the ranking member, castigated Goldman for bringing this fact up.

Then Gaetz jumped, even though he hadn't been recognized to question the witness.

"And you're here giving this testimony, in place of the chairman!" Gaetz continued, raising his voice above the sound of the gavel. "I hope that clears up the implication!" (This didn't actually seem related to what Collins had said at all.)

"The gentleman does not have the time, and the gentleman has been warned before!" Nadler said, rebuking Gaetz. "You cannot simply yell out and disrupt the committee!"