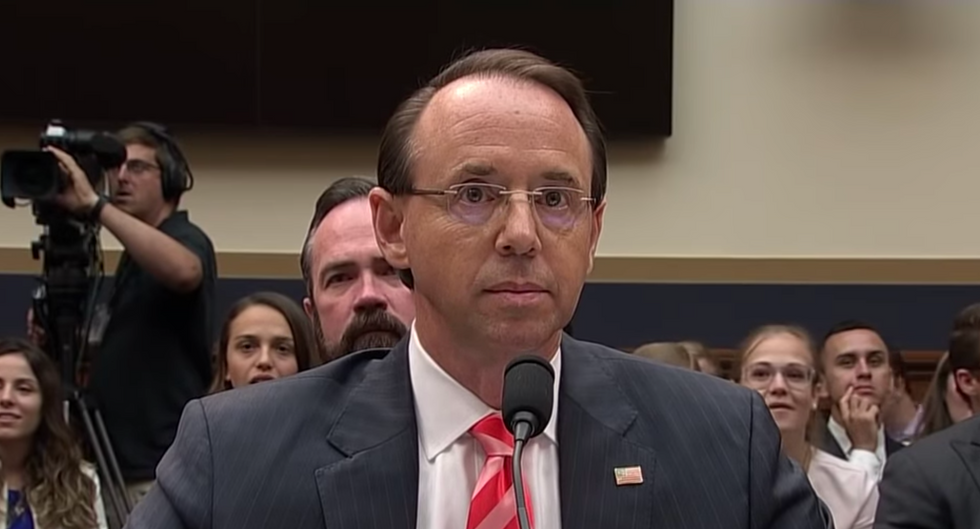 Former FBI lawyer Lisa Page filed a lawsuit against the Justice Department and the FBI on Tuesday, alleging that her privacy was violated by the U.S. government, in part, to please President Donald Trump.

Page has been demonized by Trump and his followers for her work in the FBI. She was a part of extremely political sensitive investigations during 2016 that affected both Trump and Hillary Clinton. When the Justice Department released her text messages to former FBI agent Peter Strzok, it revealed both that they were having an affair and that they strongly opposed Trump's bid to become president. Based on these texts and additional allegations, many of which were unfounded, Trump and his defenders alleged that there was a sprawling conspiracy withing the FBI against him as a candidate that continued into his presidency.

Now, Page has claimed in the lawsuit that the department's release of the texts — which were sent on FBI phones — to reporters in December 2017 violated the Privacy Act.

"At the time, the messages were part of a larger set of materials under review by the DOJ’s Office of the Inspector

General ... for evidence of potential bias in the FBI’s investigation of former Secretary of State Hillary Clinton’s use of a private e-mail server for government communications," the lawsuit said. "Although the OIG review was not yet complete, the officials who authorized the disclosure and their allies sought to use, and ultimately did use, the messages to promote the false narrative that Plaintiff and others at the FBI were biased against President Trump, had conspired to undermine him, and otherwise had engaged in allegedly criminal acts, including treason."

On information and belief, DOJ and/or FBI officials disclosed the messages to reporters for multiple improper reasons, including to elevate DOJ’s standing with the President following the President’s repeated public attacks of the Department and its head, Attorney General Jefferson B. Sessions III. They did so by summoning DOJ beat reporters to the Department to review the messages at night, prohibiting the reporters from copying or removing the set of messages from the building, and instructing them not to reveal DOJ as the source. This clandestine approach is inconsistent with the disclosure of agency records for transparency purposes or to advance the public interest.

Ultimately, OIG found no evidence of bias affecting any investigative decisions in the FBI’s Midyear investigation, but the Inspector General’s report, issued six months after the December 12 disclosure, came too late. By then, Defendants’ unlawful conduct had turned Plaintiff into a subject of frequent attacks by the President of the United States, as well as his allies and supporters. In the two years since the December 12 disclosure, the President has targeted Ms. Page by name in more than 40 tweets and dozens of interviews, press conferences, and statements from the White House, fueling unwanted media attention that has radically altered her day-to-day life.

No bias was ultimately determined to have affected the investigations, the lawsuit argued.

Page asks for at least $1,000 dollars and attorney fees — a relatively small amount, signaling that her interest is in clearing her name, rather than obtaining a large settlement.

The lawsuit noted that Deputy Attorney General Rod Rosenstein was scheduled to testify before Congress the morning after the department gave the press the texts. It argued:

Disclosure of the text messages before Rosenstein’s hearing would serve multiple goals: it would protect the Deputy Attorney General from criticism during his testimony; it would show that the Department was addressing matters of concern to the President; and it would dominate coverage of the hearing, which otherwise could be unfavorable for the Department. And the Department could achieve all of this at the relatively low cost (in the Department’s view) of the privacy of two FBI employees: Ms. Page, a longtime DOJ and FBI attorney, and Mr. Strzok, a career FBI agent.

Sarah Isgur Flores, a Justice Department employee, told the reporters who viewed the texts ahead of the testimony not to identify the department as the source of the materials, the lawsuit said. Rosenstein, however, admitted during his testimony that the department has released the information. The lawsuit claimed that evidence will show the release was "willful and intentional and that the relevant officials knew that releasing the messages to the media was improper and in violation of both law and agency policy."

"Without mincing words, what Page alleges occurred here is that Rosenstein was about to testify before Congress and needed to generate political cover for Trump and to take heat off himself. So he intentionally offered two FBI employees up for the slaughter, in violation of law," said Susan Hennessey, executive editor for Lawfare. "You give up a lot order to work in government. Transparency of records is part of the deal. The deal is that the government will handle your records in accordance with the law. The deal isn't that you will be targeted as political fodder if it becomes convenient to leadership."

She also noted that, as the inspector general report on Crossfire Hurricane released on Monday showed, some other FBI employees were found to have been sending texts that displayed clear anti-Clinton, pro-Trump bias. Their names, however, do not appear to be forthcoming from the department.