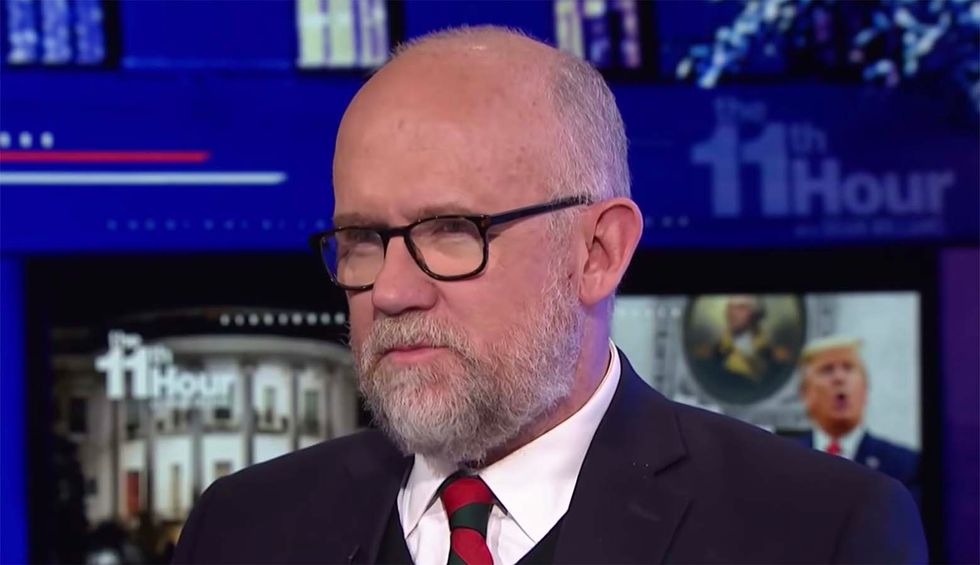 The night before the U.S. House of Representatives was preparing to vote on two articles of impeachment against President Donald Trump — one for abuse of power, the other for obstruction of Congress — GOP strategist Rick Wilson explained to MSNBC’s Brian Williams why he has formed a right-wing anti-Trump SUPER PAC, The Lincoln Project, with three fellow Never Trump conservatives: George Conway, Steve Schmidt and John Weaver.

Appearing on “The 11th Hour,” Wilson said of Trump, “He’s an unhinged madman…. This is a man who sees himself as unbounded by the law and the Constitution.”

Trump, Wilson told host Williams, has been terrible for the conservative movement in the United States and terrible for the country in general. Wilson acknowledged that The Lincoln Project doesn’t have the financial resources of pro-Trump groups in the GOP, but stressed that it’s nonetheless important for the super PAC to speak out.

“We don’t have as money as Donald Trump and Mitch McConnell, but we’re some scrappy old bastards,” Wilson told Williams.

Trump’s grip on the GOP, Wilson lamented, is so strong that even Republicans who are considered “moderate” are afraid to challenge him — and Wilson told Williams that his “pessimistic prediction” is that Sen. Susan Collins of Maine, for example, will vote “not guilty” when asked to vote on articles of impeachment in a Senate trial.

Wilson, author of the book, “Everything Trump Touches Dies: A Republican Strategist Gets Real About the Worst President Ever,” also said of Trump, “This is a moment where a parasite crawled into a party and ate it from the inside out.”