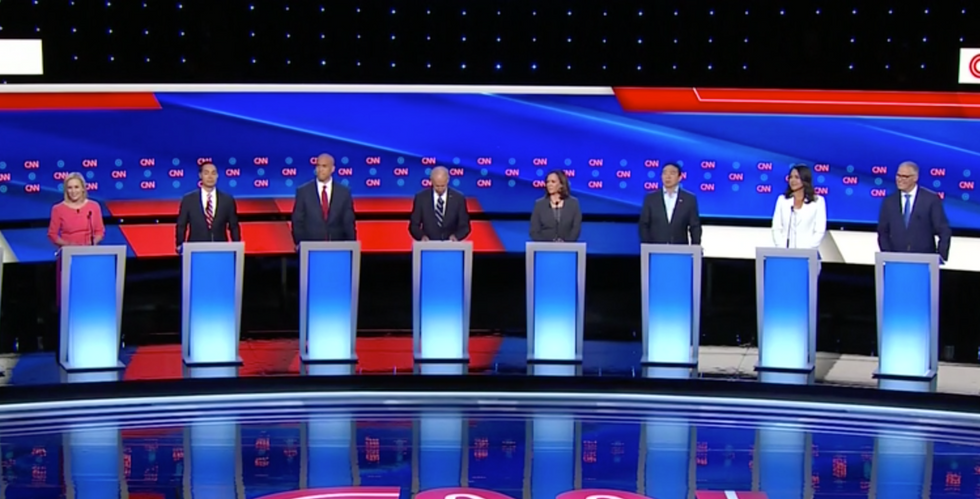 If you're a political junkie who's been watching every twist and turn in the Democratic primary race since the day after the 2018 midterm results came--and if those in your social media circle are the same way--you've probably grown weary of the drawn-out campaign and wish people would start voting already. But keep in mind that many less engaged voters are just now beginning to tune in. Historically, early-state primary polls have only begun to have predictive value after Thanksgiving. That make sense when you consider that most people don't pick out their Halloween costumes in May or June.

Surveys show that there's an unusual degree of interest in the 2020 election, so it's possible that normies started paying close attention earlier than usual this cycle, but it's also possible that this post-holiday week marks an unofficial start of the contest for the Democratic nomination.

With that in mind, here are a few things that a political junkie should keep in mind about how the primary race stands among the broader Democratic electorate.

National polls don't mean much this far out

The latest Quinnipiac poll got a lot of attention this week. It found that former VEEP Joe Biden had retaken the lead from Sen. Elizabeth Warren. Many people think Biden's persistent lead in the national polling averages indicates that he's very likely to become the Democratic nominee. But while a candidate would prefer to be ahead than behind, keep in mind that in Quinnipiac's Oct 29, 2003 release, Wesley Clark led the field with 17 percent, trailed by Howard Dean and Joe Lieberman. Dick Gephardt followed and then came John Kerry, the eventual nominee, sitting in 5th place.

In their December 10, 2003 poll, Dean had jumped ahead of Clark with the support of 22 percent of likely primary voters. Kerry's support, meanwhile, had dropped from 10 to 8 percent, and while he was still in 5th place, that survey found him tied with Al Sharpton.

Polling can tell you something about a candidate's appeal, but it can't shed much light on what's under the hood of their campaigns--on the quality of their field organizations.  When people start casting ballots, some will overperform expectations and others will disappoint. "Momentum" is a creation of the political press, but its effects are real--results in early states influence the media coverage and that in turns shapes the perceptions of voters in later states.

So it's quite likely that the race will be reshaped as voting moves first from lily-white Iowa and quirky New Hampshire to South Carolina and Nevada, and then when February turns to March, when a huge chunk of delegates will be awarded on Super Tuesday.

And of course unforeseeable events could also restructure the campaign entirely. Howard Dean was flying high early in 2004 leading up to the Iowa Caucuses. Adam Mordecai, a Dean staffer in Iowa, would later recall, "We felt like we were invincible. He just kept winning poll after poll. He was on every magazine cover." But after a disappointing third place finish Dean gave a defiant speech with a rousing finish that would become known as "the Dean Scream," which fascinated our superficial political press and ultimately stopped his campaign dead in its tracks.

It's a very fluid race

According to the latest Quinnipiac poll, only 11 percent of Democratic primary voters are "undecided." But that figure is misleading, because another 57 percent of respondents said that while they are backing a candidate now, they might change their minds. This means that when you read, "candidate X is at 35 percent in poll Y," over half of those supporters are leaning towards that candidate at this point.

Whenever a prominent Democrat endorses or criticizes a candidate or a pundit with a big platform declares that a campaign is either surging or lagging, some people will conclude that it's proof that the establishment is coalescing around one campaign or another. Sensitivities about Democratic elites putting their collective thumb on the scale linger from 2016.

But 2020 is a very different race. As I wrote back in August, in 2016, Hillary Clinton racked up a momentous lead in endorsements from elected officials and prominent party activists. But so far in this cycle, most of those influential voices have waited to see how things will shake out. And the endorsements that have come in so far are distributed much more broadly among the candidates. (More generally, it's better to think of the party's establishment as a cluster of power centers that come to a consensus at times, rather than as a monolithic creature.)

Ideological lanes are a pundit's' fallacy (with a caveat)

A lot of faulty analysis is based on the idea that moderate candidates are battling each other to win the moderate "lane" and progressives are similarly vying for a discrete group of consistently progressive voters. This ubiquitous narrative is contradicted by research undertaken by political scientists and by voters' second choices in the polls. Among Biden supporters in the Morning Consult poll, for example, 26 percent cite Bernie Sanders as their second choice, 19 percent name Elizabeth Warren and only 12 percent say it's Pete Buttigieg, who is frequently said to be the moderate alternative to Biden.

But there's a caveat: the fact that there's so much lane-based analysis may signal to voters that a candidate is or isn't aligned with their political identity. (Also, Nate Silver argues the lanes are real when you account for ideology "along [with] other dimensions.")

Most voters aren't persuaded by policy (with a big caveat)

Studies find that a small share of the electorate base their votes primarily on whether a candidate agrees with them on a few hot-button issues like abortion and guns. And there is some evidence that marijuana legalization boosts turnout among younger voters and may discourage third-party voting when it's embraced by a Democratic candidate.

But a growing body of research suggests that most voters align themselves with a candidate (or a  faction or party), and then work backwards to support that candidate's policy proposals.

But here, again, we have to acknowledge that the way the media covers an issue also shapes how voters perceive it, and possibly how they think about candidates who support or oppose it. (I will write more about this issue soon in relation to Medicare for All.)

Most polling of demographic subgroups is misleading

You might hear that Mayor Pete Buttigieg is polling at zero percent with African-Americans, for example, or that voters over age 65 in South Carolina hold this or that opinion. Keep in mind that in most polls, these results are based on small sub-samples from a larger survey and as a result, tend to have a lot of room for error.

Last month, when Pete Buttigieg was in fourth place in New Hampshire, I argued that despite enjoying a flurry of favorable media coverage, the South Bend, Indiana mayor had not yet broken into the top tier of candidates. Now that he's leading in both Iowa and New Hampshire, it's probably safe to say that he has.

But Buttigieg still differs from the other top candidates in one important way: According to Morning Consult, more than a third of Democratic primary voters have either never heard of the guy (18 percent) or don't yet know enough about him to have formed an opinion (18 percent).

That means he has room to grow, but it also means that as more voters get to know him better he could prove to be a flash in the pan. How he does in the first two contests relative to his polling, and the results of South Carolina and Nevada--the other, more diverse February states--will probably go further toward determining which how his candidacy proceeds than it might with a more established figure.

Electability is only ever clear in hindsight

Back in June, I argued that 2020 will be first and foremost a battle over Donald Trump and the political movement he has inspired. Polls show that both parties' bases are fired up to a degree that's unprecedented in the modern era.

The Democratic coalition is bigger, and Republicans know that. So while the quality of the Dems' nominee matters at least at the margins, the outcome will probably come down to whether the backlash against Trump that led to Democratic wins in the off-year elections of 2017, 2018 and 2019 can overcome an enormous amount of voter suppression, targeted disinformation and other measures to curb turnout among Trump's opposition.

This post has been updated. An earlier version misstated the sequence of events around Howard Dean's 2004 "scream" speech.