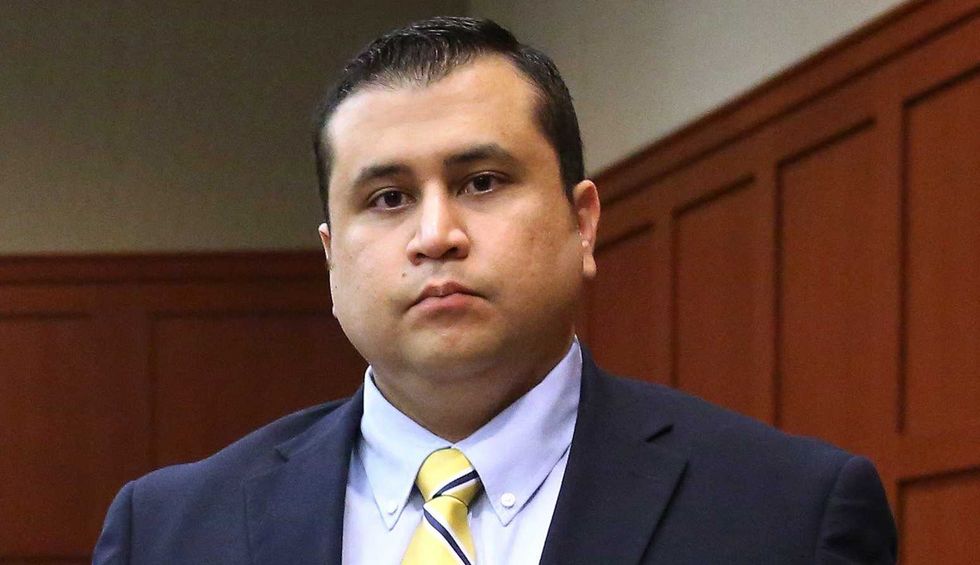 George Zimmerman, a former neighborhood watch volunteer, shot and killed 17-year-old Trayvon Martin in 2012 as the unarmed black teenager was walking in the gated community his father’s fiancee lived in. Trayvon, who was on his way back from the store, carried just a bag of Skittles and a drink, though Zimmerman claims he shot in self-defense. Being acquitted of the teenager’s death in 2013 was apparently not enough. As reported by the Miami Herald, Zimmerman is filing a lawsuit against Martin’s family, civil rights attorney Ben Crump, key witness Rachael Jeantel, and others. He seeks more than $100 million in damages.

The suit, which was filed in Polk County, Florida, alleges a number of offenses, including conspiracy, abuse of civil process, and defamation. Among other claims, the suit alleges that Rachel Jeantel, an important witness in the trial who was on the phone with Trayvon before he was killed, was an “imposter.” The lawsuit accuses defendants of creating a “false storyline to prosecutors in order to cause Zimmerman to be arrested, tried, and convicted for second degree murder." The suit states that all listed defendants “have worked in concert to deprive Zimmerman of his constitutional and other legal rights.”

Of note, of course, is Sybrina Fulton. Fulton is listed as the lead defendant. She is also Trayvon’s mother. Fulton became active in the Black Lives Movement, as well as gun reform, after her son’s death. She’s currently running for a seat on the Miami-Dade County Commission.

Crump, the family attorney, also stands out on the list. He issued a statement on behalf of himself, Tracy Martin, and Sybrina Fulton on Wednesday:

“I have every confidence that this unfounded and reckless lawsuit will be revealed for what it is – another failed attempt to defend the indefensible and a shameless attempt to profit off the lives and grief of others. This plaintiff continues to display a callous disregard for everyone but himself, revictimizing individuals whose lives were shattered by his own misguided actions. He would have us believe that he is the innocent victim of a deep conspiracy, despite the complete lack of any credible evidence to support his outlandish claims.This tale defies all logic, and it’s time to close the door on these baseless imaginings.”

HarperCollins, a book publisher, is on the list because of Crump’s book, Open Season: Legalized Genocide of Colored People, in which Zimmerman claims he was defamed.

Who is representing Zimmerman in this case? Far-right activist and attorney Larry Klayman. Klayman is the founder of the conservative watchdog group Freedom Watch. Among other things, you might remember him as a major “birther” who refused to believe that former President Barack Obama was born in the United States. As reported by ABC 7, an ethics committee of the bar in D.C. recommended that Klayman’s license be suspended in July.

Why this suit and why now? Klayman said the suit came to fruition after new “evidence” in a film and book called The Trayvon Hoax: Unmasking the Witness Fraud that Divided America by filmmaker Joel Gilbert came to light.

NBC reports that Zimmerman, Klayman, and Gilbert arranged to hold a press conference at Coral Gables Art Cinema on Thursday to discuss their case. However, once the theater realized the details, it canceled the event.

Zimmerman has been arrested numerous times since he walked free in 2013. He faced felony aggravated assault charges and domestic aggravated assault charges (both dropped), and charges of cyberstalking and harassing a private investigator. A man also said Zimmerman threatened to kill him during a road rage incident. In perhaps his most uniquely horrifying move since being acquitted, Zimmerman also says he sold the gun he says he used to kill Trayvon.