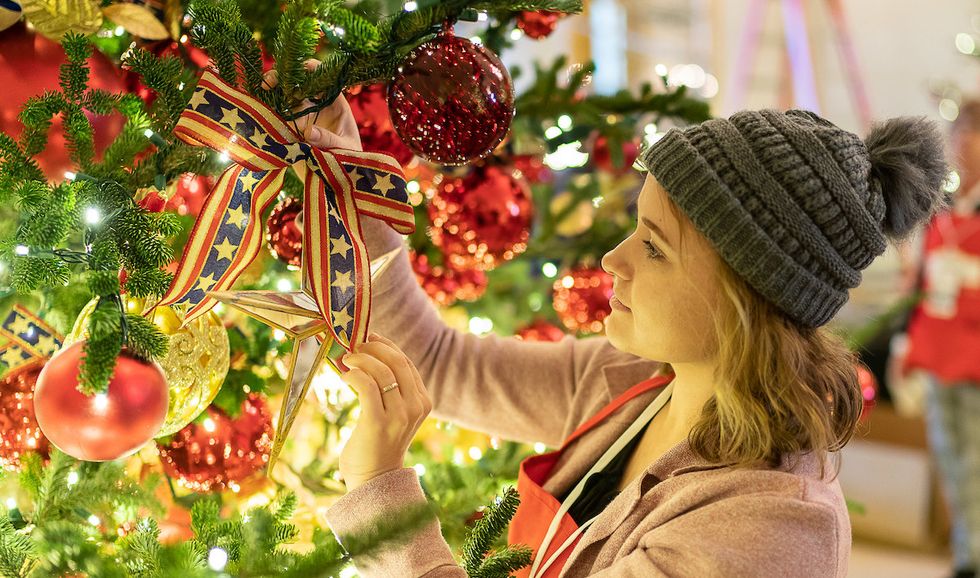 A volunteers decorates a tree in the East Room of the White House Wednesday, Nov. 27, 2019, in preparation for the upcoming Christmas Season at the White House. (Official White House Photo by Andrea Hanks)
Igor Derysh
and
Salon
December 28, 2019 Culture

The trio of hosts took issue with Marcotte’s op-ed from earlier this week, which criticized the Hallmark Channel for enforcing a white, Christian and heteronormative worldview within its film canon. The hosts brought on frequent Hallmark leading man Dean Cain, who accused Marcotte of waging a war against Christmas. In truth, she had advocated for diversity in the network’s holiday line-up.

Responding to a controversy over Hallmark pulling ads promoting the wedding company Zola which showed a lesbian couple kissing, Marcotte slammed the network for claiming that it was “committed to diversity and inclusion.”

“Running down this year's schedule of Christmas movie offerings is like a trip into an uncanny valley of shiny-teethed, blow-dried heteronormative whiteness, with only a few token movies with characters of color. It's like watching ‘The Stepford Wives,’ but scarier, since the evil plot to replace normal people with robots is never actually revealed,” Marcotte wrote. “Even in Nazi Germany, the majority of movies approved by the Nazi minister of propaganda, Joseph Goebbels, were escapist and feather-light, with a Hallmark movie-style emphasis on the importance of ‘normality.’”

“Ultimately, there is probably no way to square the claim to believe in ‘diversity’ with fascistic impulse that guides the current crop of Hallmark movies, which center always around these frankly MAGA-style ideas about what constitutes ‘real’ America,” Marcotte added. “The best that Hallmark can do is some token ‘diversity’ that wipes out most of what makes people actually diverse. Their money comes from selling a vision of America that increasingly authoritarian conservatives wish to believe once existed and can be restored again — an America that excludes most of an increasingly urban, racially diverse, cosmopolitan nation.”

The hosts of Fox & Friends brought on Cain, who is best known for his portrayal of Superman on the short-lived ABC series "Lois & Clark," to respond to Marcotte’s criticisms. Cain, who co-host Ed Henry labeled the “Hallmark heartthrob,” called those opinions not only “insane” but also “ridiculous.”

“It’s really terrifying to wake up the day after Christmas to find out that Santa is a Nazi,” Cain said. “It was so ridiculous I thought it was a terrible Adam Schiff parody. Then I went and read it, and it’s insane.” (Marcotte did not call Santa a Nazi in her piece.)

Cain further claimed that “if you want to know who the fascist is look who wrote the article,” alleging that Marcotte was “telling you what you should believe" and "how society should be” when she only called on the network to reflect the diversity of its own audience.

“It’s just completely wrong to say they’re Nazi propaganda or fascist propaganda,” Cain said. “The Hallmark Channel is the farthest thing from that.”

The co-hosts then read an excerpt from a statement from Salon's Editor-in-Chief Erin Keane, which encouraged viewers to "enjoy your holiday fare, but do so with a critical eye."

"We recommend that anyone interested in this article just come to Salon and read it for yourself," Keane said in the complete statement. "While a lot of people watch the empty fluff of the Hallmark Channel for fun, it's important to understand the way false nostalgia operates and how it can be used as a weapon to marginalize people as "different" for being LGBTQ, non-white, or being women with career ambitions."

Cain shook his head as the hosts read the quote before accusing Salon of attacking Christmas, a holiday which was marked in numerous articles on its website.

“They’re not saying anything that means anything,” Cain said. “It’s just a bald-faced attack on Christmas and love. They’re the haters. They’re hating on Hallmark. I’m sure they hate Fox News.”

However, the segment ignored the fact that Marcotte's words came in response to a right-wing pressure campaign, which demanded that Hallmark remove an ad showing a lesbian couple kissing. The network pulled the ad, claiming that it was against its policy to show ads featuring “overt public displays of affection,” which Marcotte pointed out was hypocritical given its own holiday line-up.

Her commentary further criticized the network for betraying its “commitment to diversity” by featuring a holiday lineup, which is almost entirely white.

“It's critical to be mindful of the role that Hallmark movies are actually playing in our society,” Marcotte wrote. “The very fact that they're presented as harmless fluff makes it all the more insidious, the way they work to enforce very narrow, white, heteronormative, sexist, provincial ideas of what constitutes ‘normal.’”