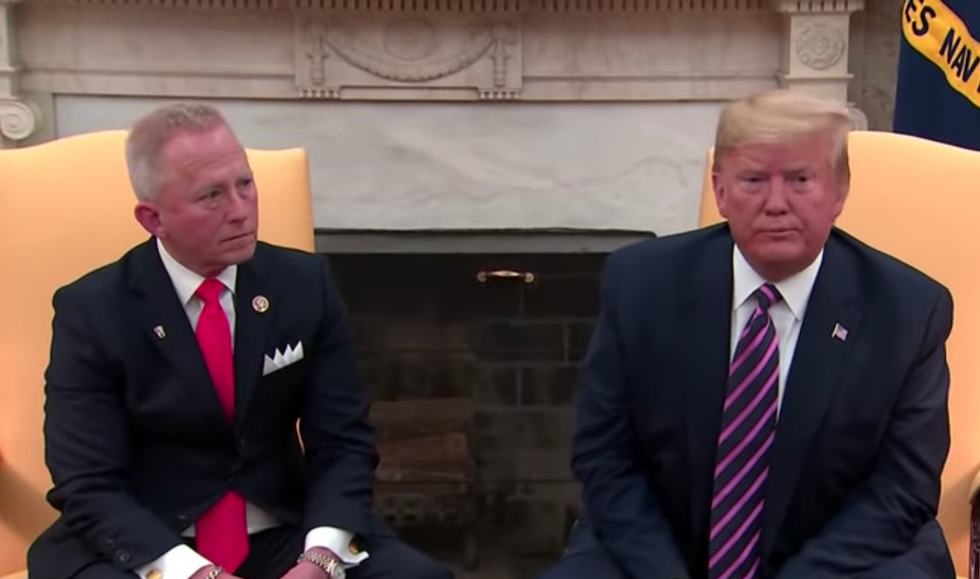 Rep. Jeff Van Drew of New Jersey, who was elected as a Democrat, gave President Donald Trump something of a minor win as he left his party and joined the Republicans in opposition to impeachment. And while this news was reported for days before the actual vote, Van Drew retained his party membership until Thursday, apparently to give the president a bit more cover while he was impeached Wednesday night by having bipartisan opposition to the measure.

Making the party switch official on Thursday, Van Drew appeared alongside the president in the Oval Office. Trump officially endorsed Van Drew for his re-election and celebrated having a turncoat.

Van Drew, in response, made a staggeringly obsequious gesture to the president.

"You have my undying support, always," Van Drew told Trump.

Mehdi Hasan, a columnist for the Intercept, noted the obvious irony of the claim, tweeting: "Aside from the embarrassing sycophancy of this exchange, amusing to see someone who just *defected* from his party telling his new party boss that he will 'always' have his support. Always."

But shortly thereafter, it seems Van Drew was trying to backpedal from the level of servility he displayed.

Katherine Faulders of ABC News later asked Van Drew about his pledge of "undying" support for Trump, and the New Jersey Congressman tried to deny it.

However, he did clearly say "undying" to the president. It was on tape.