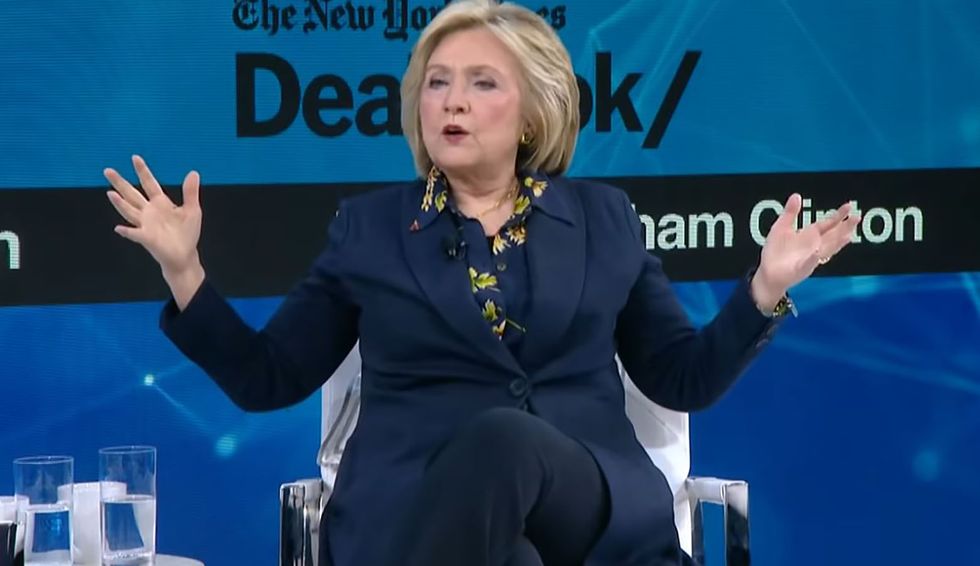 Trump claimed for years that the FBI investigation was opened because of anti-Trump bias by FBI leaders, citing text messages sent between former top FBI counterintelligence agent Peter Strzok and former FBI lawyer Lisa Page that criticized him during the 2016 campaign. Inspector General Michael Horowitz concluded that neither Strzok nor Page were in a position to start an investigation into Trump’s campaign and concluded that the FBI probe was justified, refuting claims that the probe was opened because of bias by the FBI’s top officials.

Horowitz did find, however, that numerous FBI agents sent anti-Clinton text messages and expressed a desire to investigate the Clinton Foundation, which was at the center of numerous baseless Trump conspiracy theories during the campaign and after the election.

The report said that investigators reviewed text messages by senior FBI agents “which reflect their support for Trump in the 2016 elections.”

“If you hear talk of a special prosecutor … I will volunteer to work [on] the Clinton Foundation,” one FBI agent wrote to another on Nov. 9, 2016, according to the report.

The agent also wrote that he “was so elated with the election” that it was like “watching a Superbowl comeback.”

The agent told the inspector general’s office that he “fully expected Hillary Clinton to walk away with the election but, as the returns [came] in … it was just energizing to me to see … [because] I didn’t want a criminal to be in the White House.”

The report included a text exchange in which two agents celebrated Trump’s win.

“Sh*t just got real,” one of them wrote. “I saw a lot of scared MFers on … [my way to work] this morning. Start looking for new jobs fellas. Haha.”

This is not the first time Horowitz found anti-Clinton bias at the FBI. He released another report in 2018 finding that former FBI Director James Comey reopened the probe into Clinton's emails just before the election out of fear that anti-Clinton FBI agents at the bureau’s New York field office would leak information.

Former Attorney General Loretta Lynch told investigators that Comey told her it had “become clear to him … that there is a cadre of senior people in New York who have a deep and visceral hatred of Secretary Clinton.”

“He said it is, it is deep ... He said it was surprising to him or stunning to him,” Lynch said, according to Horowitz’s report. She added that “it was hard to manage because these were agents that were very, very senior, or had even had timed out and were staying on, and therefore did not really feel under pressure from headquarters or anything to that effect.”

“My worry was, I have to be careful that people in New York aren’t by virtue of political enthusiasm, trying to take action that will generate noise that will have an impact on the election,” Comey himself told investigators.

Former Acting Attorney General Sally Yates confirmed that FBI brass “felt confident that the New York Field Office would leak it and that it would come out regardless of whether [Comey] advised Congress or not.”

In fact, leaking is exactly what the FBI agents apparently did ahead of the election.

One FBI agent told The Guardian in October 2016 that Clinton was “the antichrist personified to a large swath of FBI personnel,” and that “the reason why they’re leaking is they’re pro-Trump.”

Ultimately, Comey, his deputy Andrew McCabe, Baker, Strzok and Page were all pushed out of the DOJ and FBI. It remains unclear whether any FBI agents identified as biased against Clinton were disciplined in any way.

The New York Times has detailed the way Trump attorney Rudy Giuliani teased leaks from the FBI agents ahead of the 2016 election.

“I think he’s got a surprise or two that you’re going to hear about in the next few days. I mean, I’m talking about some pretty big surprises,” Giuliani told Fox News, only days before the Department of Justice reopened the Clinton email case two weeks before the election.

“Mr. Giuliani would later deny that he had heard about the emails from F.B.I. agents, though he had bragged about that in broadcast interviews,” the Times report noted. “With two days to go until the 2016 election, Mr. Comey said the review of the material in the laptop had not changed the bureau’s view that Mrs. Clinton had not committed a crime. The unquantifiable damage, though, had been done.”