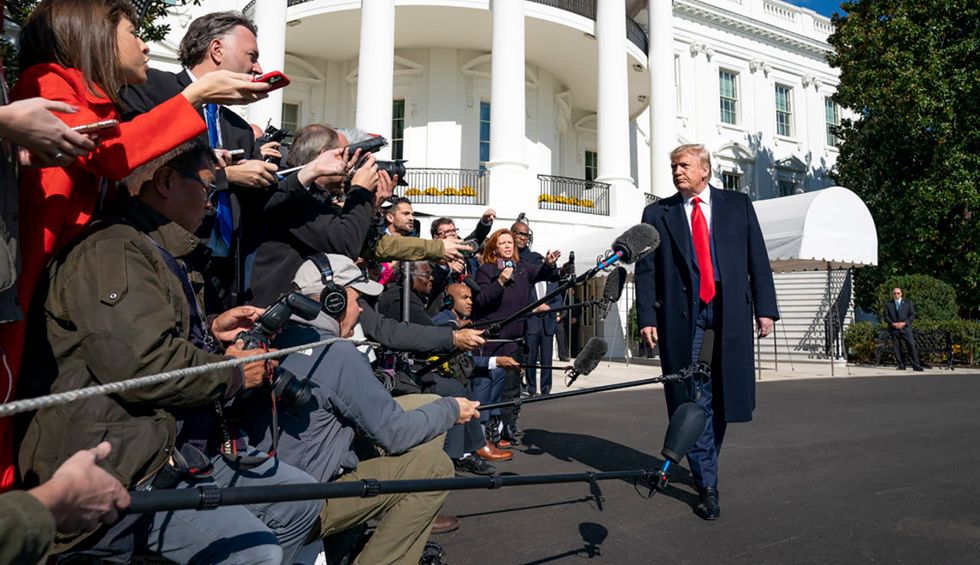 Extreme times call for extreme measures, but the Beltway press just isn't willing to make that move in the Trump era. As a consequence, the news media fail to accurately capture the radical changes now underway in the country, and how today's Republican Party has become purposefully untethered from reality.

Donald Trump remains a resolutely radical player who has eviscerated decades of protocols and traditions. Yet so much of the press refuses to cover him that way, opting instead to cling to Beltway traditions for how presidents are normally covered (i.e. We can't call him a liar!). But as the high-profile impeachment hearings confirm (along with Trump's recent disastrous and embarrassing trip to the NATO summit), new and bolder language is needed to accurately describe what's transpiring.

Under Trump, we're all in uncharted territories, and that includes the press. We have never had a major political party in this country, for instance, that openly condones seeking help from foreign powers in order to win domestic elections, the way Republicans now do. We've never had a political party that essentially absolves the president of the United States of all crimes and misdemeanors, simply because he has an 'R' next to his name. Meaning: The press has never before faced the challenge of how to cover and describe what was once a mainstream political party but has since evolved into a deeply radical one. For now, much of the news media is simply pretending that historic GOP shift hasn't taken place, and therefore there's no need to dramatically adjust the coverage.

But it has, and there is.

The media's stubborn failure to adjust is now advertised daily. For instance, last week CNN's John King and a roundtable of Beltway pundits expressed complete shock at a new poll that found 53% of Republicans said that Donald Trump is a better president than Abraham Lincoln was. If those pundits had closely followed the radical evolution of the GOP in recent years and been honest with news consumers about its descent into cult worship, there's simply no way they would be utterly bewildered at Republicans' belief today that Trump's a better president than Lincoln. But if you've strained mightily to pretend Democrats and Republicans are mirror opposites of each other and advocate equally mainstream, fact-based positions, than yes, you'd be shocked by the Lincoln finding.

It's the same reason that the percentage share of Republicans who say presidents could operate more effectively if they didn't have to worry about Congress and the courts increased 16 percentage points over the past year, according to the Pew Research Center.

And that's the challenge for the press: How to describe this unprecedented political movement.

"The idea that one party has become so radically different from the other, despite mountains of evidence, is a tough sell. It’s a hard sell to make for one very simple reason: It doesn’t have a name, this thing the Republicans are trying to do," notes Michael Tomasky. "It’s not true democracy that they want. But it’s also a bit much to call them outright authoritarians. And there’s nothing in between."

The impeachment saga poses the most obvious challenge for the press as virtually the entire Republican Party now backs absurd lies about Ukraine. "The inchoate and unproved nature of the Republican case against Ukraine has not prevented several GOP leaders from taking up the cause," The Washington Post recently reported, as the paper examined the Republican Party's embrace of the "incendiary conspiracy" that Ukraine worked to try to get Hillary Clinton elected in 2016.

With "inchoate and unproven," the paper clearly tried to convey the sense that Republicans were peddling untruths— without unequivocally stating that Republicans now lie about almost everything, including the garbage Ukraine claim, which has been pushed publicly by Russian President Vladimir Putin. Fact: No U.S. intelligence community report has ever accused Ukraine of interfering in the election. Trump, of course, is accused of using $400 million in United States military assistance to pressure Ukraine to investigate his political rival, Joe Biden.

"Some Republican lawmakers continue to misleadingly say that the government of Ukraine interfered in the 2016 election on the same level as Russia, despite the GOP-led committee looking into the matter and finding little to support the allegation," CNN's Jake Tapper recently wrote. But again, we're not talking about Republicans trying to artfully spin a story in their favor by being "misleading." We're talking about Republican making stuff up, plain and simple. And the press should say so.

To CNN's credit, it recently documented all the "falsehoods" Trump spewed during one of his signature incoherent press events while he attended the NATO gathering of world leaders. "Speaking to reporters for more than two hours in total, Trump made at least 21 false claims. That's our initial count. The total may well grow once we have time to do some deeper fact-checking," reported CNN's Daniel Dale. "Embarking on a dishonesty blitz while at a foreign summit would be strange behavior for any other president. For Trump, long impervious to norms of propriety and accuracy, it was just another Tuesday."

And frankly that's how much of the coverage portrayed Trump's latest descent into madness: Just another day on the job. "Trump’s wild NATO display," read a recent Post headline. But the "wild" merely referred to the political chaos Trump created by making public statements at the global summit that clearly contradicted U.S. policy. Completely omitted from the report was the fact that Trump trafficked in lies nearly nonstop during his bizarre world stage appearance.