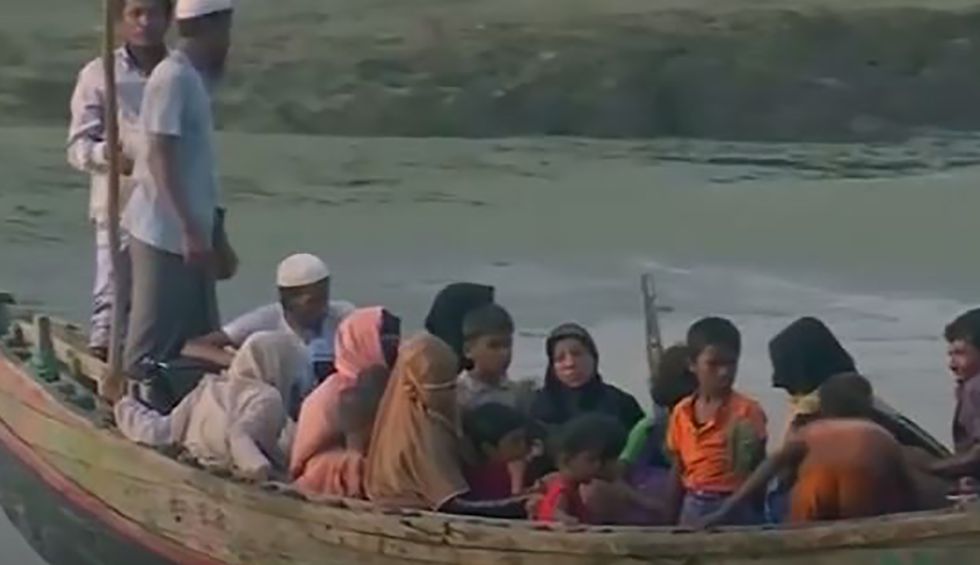 A new report reveals how long-term disasters, including sea level rise and desertification, and short-term disasters, such as storms and fires, are especially threatening to people living in the Global South and island nations. We speak with the co-author of a new study that finds the climate crisis is already leading to a massive increase in the number of refugees being displaced around the world. Hossein Ayazi is a policy analyst with the Global Justice Program at the Othering & Belonging Institute at the University of California, Berkeley. We’re also joined at the U.N. Climate Summit in Madrid by Saleemul Huq, climate scientist and the director of the International Centre for Climate Change and Development in Bangladesh. He is advising the bloc of Least Developed Countries in the climate negotiations.

AMY GOODMAN: This is Democracy Now!, democracynow.org, The War and Peace Report. I’m Amy Goodman, with Nermeen Shaikh. We’re broadcasting from inside the U.N. climate summit here in Madrid, Spain, in the last few days of this climate summit that people are calling a cop-out, that we inside the climate summit have seen mass protests here, and yet still it limps along, and outside, the number of people who are so affected by the climate catastrophe.

NERMEEN SHAIKH: A new study finds that the climate crisis is already leading to a massive increase in the number of refugees being displaced around the world. In Berkeley, California, we are joined by Hossein Ayazi, policy analyst with the Global Justice Program at the Othering & Belonging Institute at the University of California, Berkeley. He’s the co-author of the new report, “Climate Refugees: The Climate Crisis and Rights Denied.” And still with us here in Madrid is Saleemul Huq, climate scientist and the director of the International Centre for Climate Change and Development in Bangladesh. He’s advising the bloc of Least Developed Countries here in the climate negotiations.

So, Hossein Ayazi, could you lay out what you found in this report on climate refugees? How many are there? What countries are the worst affected?

HOSSEIN AYAZI: Yes. So, we’re finding in the report that permanent and short-term displacement due to the climate crisis is only increasing. In 2018, for example, of the 28 million new displaced persons, over 17 million were displaced due to weather-related natural disasters. And these displacements are, by and large, across the Global South. One need only look to the drought in Pakistan, the floods in India, in Nigeria, the crop failures and droughts in the Central American Dry Corridor that was behind the Central American migration caravan, the migrant caravan, that dominated news cycles last year.

AMY GOODMAN: So, you were here. Is that right, Hossein Ayazi?

HOSSEIN AYAZI: No, I was not at COP.

HOSSEIN AYAZI: Sure. So, I’ll start with your second question, in that petro-persecution is the main notion that we’re advancing within the report. And it’s a term — basically, we’ve identified a major barrier in negotiations toward refugee protections for climate refugees. In order to obtain refugee status, one need cross international borders due to a real risk of persecution on the basis of one’s race, ethnicity, religion, other circumstances. But this notion of persecution within refugee law assumes that the source of persecution, the actor, the persecutor, is either one’s country of origin, the government, or internal to one’s country of origin. And this is not how forced migration under the climate crisis works. In fact, when we think of forced migration under the climate crisis, it’s fundamentally impossible to tie a specific climate-related natural disaster to a specific actor of persecution, whether it’s corporation — fossil fuel corporations or fossil fuel-dependent industrial processes. Additionally, many of the countries that are at greatest risk of the effects of the climate crisis are in fact working hard to protect their own populations, to keep them in place, to ensure that they have the livelihoods to remain in place.

NERMEEN SHAIKH: And, Hossein, your report doesn’t just look at climate refugees in the sense of people who are forced to flee across borders, but also at people who have been forced to flee their homes within countries, internally displaced people. Could you talk about that? What did you find? How many people are affected, and where?

HOSSEIN AYAZI: Yes. So, by and large, most migration due to the climate crisis and most migration — most forced migration, in general, is internal. And this is something that we state clearly in the report. And that is actually — people displaced internally do have the legally recognized ability to gain — ability to resettle within their country of origin and stay put. And the issue that we found in the report is that while internally displaced peoples do have the means for recourse and redress in some way or another, that this is not at all the case for peoples forced to cross international borders. So, when we discuss refugees, whether climate refugees or not, we’re really talking about movement across international borders and how — as a certain island nations, for example, are at risk of complete inundation, or desertification makes entire countries potentially uninhabitable, that people are forced to flee their country and that there’s no place for them to resettle at home. And this is the major gap in international refugee law that we are shining the light on.

HOSSEIN AYAZI: Yeah. So, this notion of food refugees is one that we are using to define people or communities displaced due to growing food insecurity. And this can be due to a number of dynamics. This could be due to land grabs or natural resource grabs, seed monopolies, international free trade agreements — basically, what people might describe as the corporate food regime or corporate food system. And this structural vulnerability that communities face as a result of this larger system actually intersects with the climate crisis, in the sense that natural disasters exacerbated by the climate crisis force people to already — force already vulnerable peoples to search elsewhere for sustainable livelihoods. And so, while we recognize that the term “climate refugee” is different from “food refugee,” the two are really interrelated and need be recognized as both distinct categories yet fundamentally inseparable.

AMY GOODMAN: Very quickly, before we end, Saleemul Huq, this year we’re in Madrid, Spain; next year, Glasgow. What do you expect to happen in this time? Or does it even matter what happens here? Is it the action in the streets the only thing that makes a difference, like the young climate activists, by the millions, going on school climate strike, demanding that their leaders pay attention and take action?

SALEEMUL HUQ: I think it still matters. I think it does matter, because this is where the leaders are. This is where the leaders are negotiating. They have to listen to their own kids who are out on the streets shouting at them and telling them that they’re ruining their own kids’ future. So we are still hopeful that they will listen between now and Glasgow. We hope we’ll get a result in Madrid that will, on the particular issue that I’m concerned about, get a funding mechanism for loss and damage opened up for discussion, which we can come back to in Glasgow and see whether or not we can actually make it happen. We not asking for it to happen here. We’re asking for it to be allowed to happen next year in Glasgow. We’re hopeful that we might get that.

AMY GOODMAN: Well, we want to thank you both so much for being with us, Saleemul Huq, climate scientist, director of the International Centre for Climate Change and Development in Bangladesh, and Hossein Ayazi, policy analyst and co-author of the new report, “Climate Refugees: The Climate Crisis and Rights Denied.” We’ll link to that report at democracynow.org.

That does it for our coverage right here on site at the 25th United Nations climate change summit. We want to say special thanks to our crew right here in Madrid, but we’ll let them speak their own names in their own words.

AMY GOODMAN: And thank you also to the crew who helped us with our live crew last Friday from El Cumbre Social on Climate: Ana Galatea, Marina Peñuelas and Daniel Vasquez. And to the Democracy Now! crew here on the ground in Madrid: Libby Rainey, Carla Wills, Nermeen Shaikh, John Hamilton, Hany Massoud, Charina Nadura, Laura Gottesdiener, María Taracena, Julia Thomas, Adriano Contreras, Denis Moynihan and María Carrión. Special thanks to Julie Crosby — welcome back — and to Miriam Barnard. And a very welcome to the world to Malachy. I’m Amy Goodman, with Nermeen Shaikh.