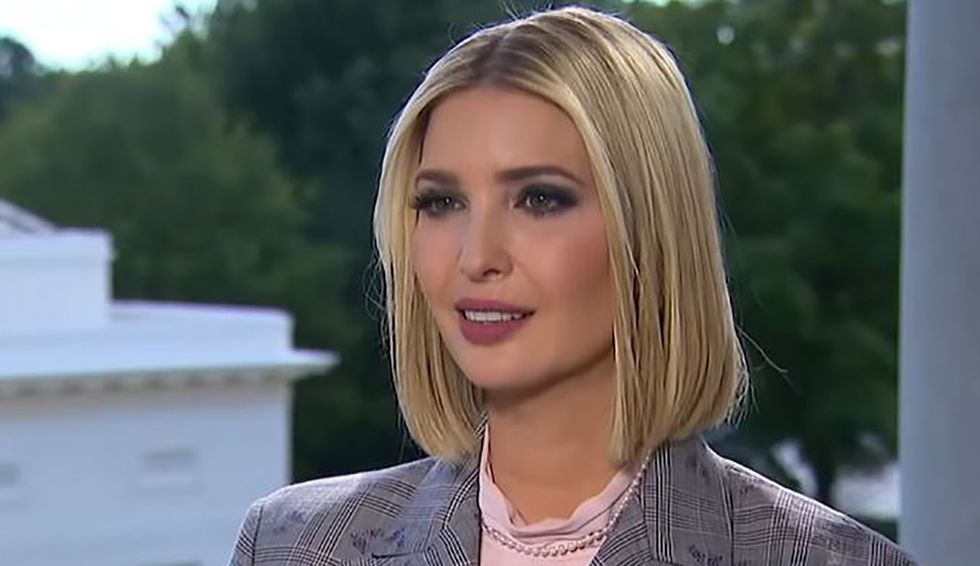 On Sunday, CBS aired Margaret Brennan’s interview with White House Senior Adviser Ivanka Trump for “Face the Nation” — and Brennan is drawing an abundance of sharp criticism on Twitter for conducting a softball interview.

President Donald Trump drew widespread condemnation for his policy of separating families at the U.S./Mexico border. One opponent of that policy was Ivanka Trump, who discussed her opposition during the interview with Brennan. But Judd Legum, who writes the political newsletter Popular Information, stressed on Twitter that Ivanka Trump only voiced her opposition to that policy after the president ended it — and lambasts Brennan for not making that clear.

During the interview, Brennan told Ivanka Trump, “You were vocal in your opposition to the family separation policy when it came to immigration and the U.S. border. You said that was a low point for you.”

With the passage of the NDAA, @IvankaTrump says getting Republicans on board with guaranteeing government workers 1… https://t.co/lTKEWIqvF1
— Face The Nation (@Face The Nation) 1577634487

Legum tweeted, “CBS’ interview of Ivanka Trump is very bad. Worse part is when @margbrennan asserts that Ivanka was ‘vocal’ in her opposition to Trump’s family separation policy. Ivanka REMAINED SILENT and only expressed opposition, when asked, AFTER Trump rescinded it via executive order.”

In a separate tweet, Legum noted, “As thousands of children remained separated and the Trump administration obstructed efforts to reunite them with their families, IVANKA SAID NOTHING. This is revisionist history of the worst sort.”

Another Twitter user, David Rothschild, posted, “Mainstream media is determined to whitewash all of Ivanka’s crimes against US (irony intended as her job has been to whitewash Trump’s misogyny, antisemitism, xenophobia, general cruelty), and make her the hero of the Trump Regime.”

Rothschild, in a separate tweet, posted, “Only thing more infuriating than the mainstream media’s false equivalency and asymmetric accountability during Trump Regime reign, will be their intense desire to whitewash the Republican Party’s full complicity & enthusiasm after the Trump Regime ends (if it ever does).”

@JuddLegum @margbrennan WORSE: She repeated the racist trope that the 900 separated children were all being traffic… https://t.co/9uY5svbF6P
— Catherine Culley (@Catherine Culley) 1577653009

@FaceTheNation Will there be any hard hitting questions about why she fraudulently misused charity money or nah?
— LAYLA BOWEN (@LAYLA BOWEN) 1577608649

Twitter user Brian M. Branch, @branchi1292, complained that in addition to immigration policy, there was a long list of things Brennan failed to address. Branch wrote that Brennan “should be fired for this horrible unprofessional interview” and “could have” asked Ivanka Trump about a “rise in hate crimes, her father wanting to be dictator, his promotion on hate and incitement of violence and so on. But (Brennan) was effing awful. Fire her!”

@Imcscout tweeted, “Please stop legitimizing her by pretending she has anything important to say,” and @cosmobaby described the “whole interview” as “pure pap and pandering.”

@Conbontalk tweeted, “I’ve heard better interviews on The View & they're not journalists,” while @b_lawrence_lowe posted that Ivanka Trump has “been engaging in a series of prearranged, softball interviews as she steps up her efforts to run for the US presidency in 2024. Everything her and her family does is a disaster for America and humanity in general.”