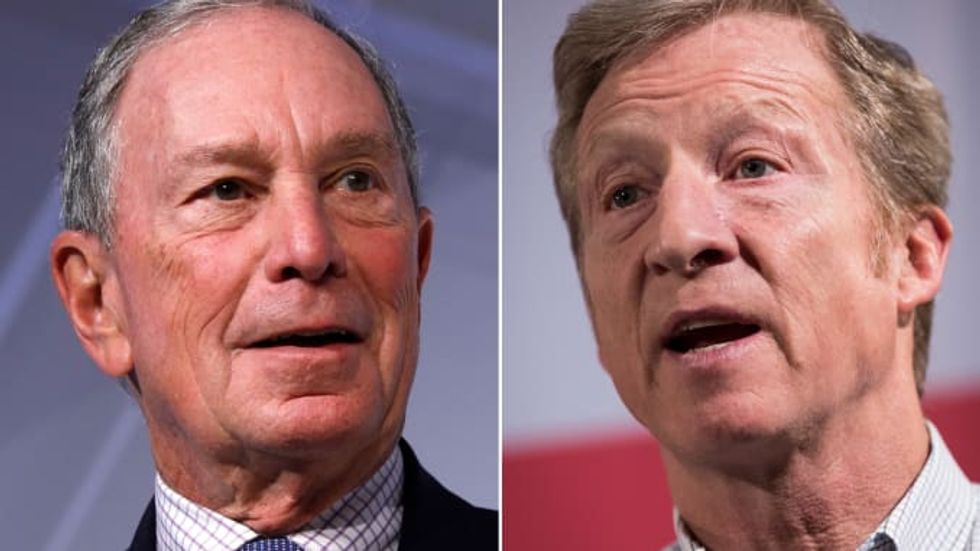 As I sweated through a cardio session at the gym the other day, I was treated to a half-dozen ads in rapid succession touting the leadership abilities of billionaire Democratic candidates Tom Steyer and Michael Bloomberg. According to CNN's David Wright, although they're relative newcomers to the primary race, Steyer and Bloomberg have so far spent $180 million on television ads between them, which is about six times what the rest of the field has spent and 18 times the combined ad buys of Elizabeth Warren and Bernie Sanders.

There is a certain logic to Steyer's media blitz that is absent from Bloomberg's. While the former New York City mayor enjoys very high name recognition, almost three in 10 primary voters have never heard of Steyer, according to Morning Consult, and another quarter say they've heard the name but don't know enough about him to have formed an opinion. TV is a good way of making your name known to the public.

But will these huge expenditures work? Can a billionaire really buy the nomination? Perhaps, but recent history is littered with the smoking ruins of rich people's self-financed campaigns. (Linda McMahon may be the biggest loser in this regard, having spent $50 million on a losing Senate race in 2010, and then burning another $49 million when she tried  again in 2012.)

There are good reasons to believe that these men's egos are driving them to burn a (tiny) share of their vast fortunes despite having little chance of becoming the nominee. TV is a blunt instrument for reaching the small share of people who vote in primaries. (We don't have numbers for Bloomberg's digital spending yet, but through mid-November Steyer was trailing only the Trump campaign in digital spending.) And primary voters tend to be among the most engaged, which means they're more likely than the general public to be familiar with the candidates and therefore less likely to be wowed by a TV ad. There's a question of saturation--did the fourth Bloomberg ad I saw while huffing away on that treadmill do anything that the first three didn't?

The other campaigns have been in the field for a year, building personal relationships on the ground. The successful ones have devoted followers who are willing to volunteer -- knocking on doors and visiting neighbors. It's unclear whether Bloomberg and Steyer even have real constituencies within the Democratic coalition, and you can't just buy them on the open market--or by dropping a fortune on television spots.