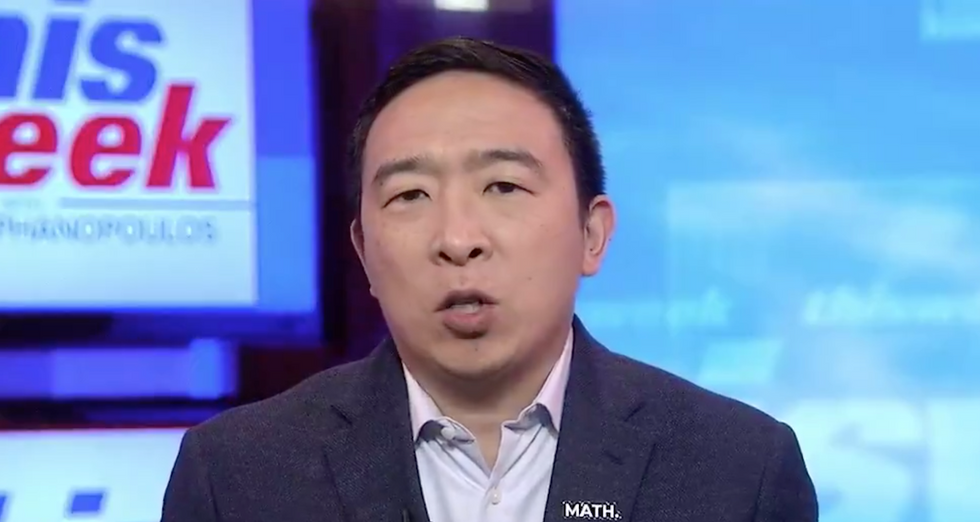 Democratic presidential candidate Andrew Yang was confronted with a massive contradiction between his campaign's claim to support Medicare for All and his actual health care plan in an interview Sunday on ABC's "This Week."

Yang has repeatedly said that he supports Medicare for All, and he has even run ads promoting his support for the idea, as host Jonathan Karl noted. But in his campaign's recently released proposal for health care, there's nothing at all resembling the idea of Medicare for All.

"I've looked at your health care plan," Karl said. "And this plan does not call for Medicare for All. In fact, it doesn't even have a public option."

The "dissonance," as Karl referred to it, is still plain to see on Yang's campaign site. His plan for health care is described under a heading called "Medicare for All." But his "six-pronged approach" to reforming health care contains the following items:

2. Invest in technologies to finally make health services function efficiently and reduce waste by utilizing modernized services like telehealth and assistive technology, supported by measures such as multi-state licensing laws.

3. Change the incentive structure by offering flexibility to providers, prioritizing patients over paperwork, and increasing the supply of practitioners.

4. Shift our focus and educating ourselves in preventative care and end-of-life care options.

5. Ensure crucial aspects of wellbeing, including mental health, care for people with disabilities, HIV/AIDs detection and treatment, reproductive health, maternal care, dental, and vision are addressed and integrated into comprehensive care for the 21st century.

6. Diminish the influence of lobbyists and special interests in the healthcare industry that makes it nearly impossible to draft and pass meaningful healthcare reform.

On their own, these might be good or bad ideas (some of them have already been tried or are being tried.) Some of them sound more like clichés than policies. But not one even addresses the expansion of the health insurance coverage, which is at the heart of what "Medicare for All" is about. And it certainly doesn't address giving Americans government-provided and -run health insurance, which is what the "Medicare" in "Medicare for All" is supposed to be about.

There's been some debate about whether a national public option for health insurance, along the lines of what Mayor Pete Buttigieg and former Vice President Joe Biden might advocate, actually constitutes or approaches "Medicare for All." Buttigieg has spun his plan as "Medicare for All Who Want It." And in the interview, Yang correctly pointed out that "Medicare for All" is not a single bill — multiple laws could fit that label, and the slogan itself has been around years before legislation was written to enact it. There's some room for reasonable disagreement about what really lives up to the name.

Yang deflected from Karl's accurate characterization of his plan, saying, "We need to move towards universal health care that's high quality and nearly cost-free for Americans around the country. But reality is, we have millions of people on private insurance right now, and taking those plans away from them very quickly would be untenable for many, many Americans."

That's a fair argument to make, but it doesn't explain why he's claiming to be for Medicare for All when he isn't, or why he wouldn't support at least a public option.

He tried to say that his plan is in favor of "expanding" universal health care, including, in part, by lowering the eligibility age for Medicare. But none of those ideas are actually in the plan his campaign put out.  And this is particularly bad, because his website describes his proposal as his "FULL PLAN for a New Way Forward for Healthcare in America."

When his plan was announced, Yang said, "I support the spirit of 'Medicare for All.'" But this claim is so vague as to be almost completely meaningless when his actual policy does nothing resembling a push for "Medicare for All."

As I said, the only plausible interpretation is that Yang is lying. He wants people to think he supports "Medicare for All," even when his actual ideas for reforming health care policy in the United States are nowhere near such a plan.