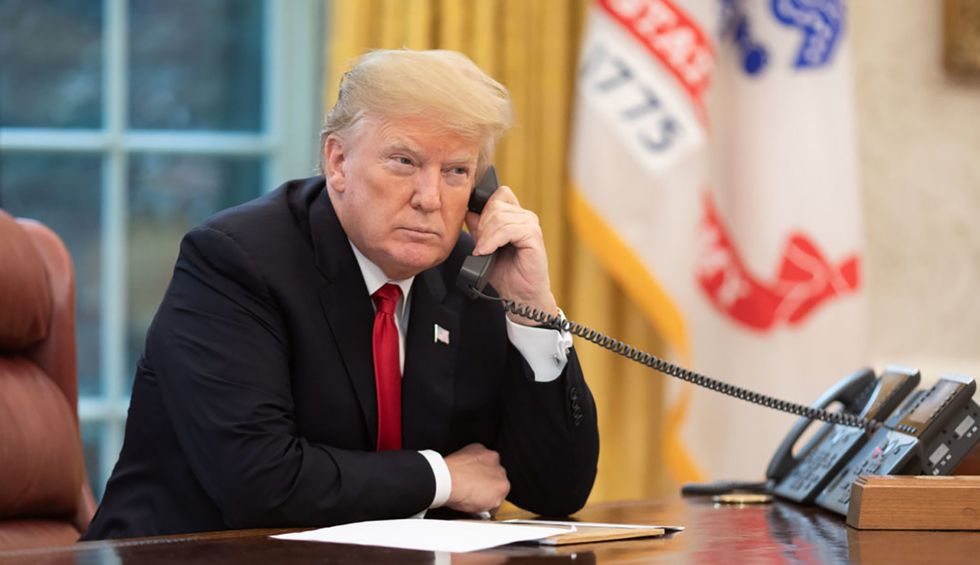 In an effort to seize the narrative, the White House released a transcript Friday morning of Donald Trump's first phone call with Ukrainian President Volodymyr Zelensky on April 21, immediately following Zelensky’s election to office. It was cordial, upbeat, and exposed the initial White House readout of the call as pure diplomatic fantasy.

The original readout said that Trump promised to work with Zelensky to "implement reforms that strengthen democracy, increase prosperity, and root out corruption." How very statesmanlike of Trump, except that he never said any of it, according to the rough transcript the White House just released.

Trump did actually congratulate Zelensky, which was about the only similarity between the readout and the rough transcript. But rather than talking about boring stuff like bolstering democracy, prosperity, and anticorruption efforts in Ukraine, Trump worked in a reference to his treasured Miss Universe pageant.

"When I owned Miss Universe, they always had great people," Trump said of Ukraine. "Ukraine was always very well represented."

Here's some other noteworthy things about the call:

1) Nowhere in the call did Trump mention anything about "corruption" or anticorruption efforts in any way. The White House has been arguing that Trump was superconcerned about corruption more generally, and that that's why Trump withheld military aid to the country. If that's true, he certainly didn't mention a thing about it in the first phone call, according to the transcript.

2) Trump invited Zelensky to the White House. "When you're settled in and ready, I'd like to invite you to the White House. We'll have a lot of things to talk about, but we're with you all the way." This White House meeting never happened, however, because Trump and his henchmen ultimately conditioned the meeting on Ukraine launching investigations into the Bidens. What happened between April 21 and Trump’s infamous July 25 shakedown of Zelensky? Deputy Assistant Secretary of State for European and Eurasian Affairs George Kent explained exactly what happened to their budding relationship in his deposition: Russian President Vladimir Putin and Hungarian President Viktor Orbán got in Trump's ear and soured him on Zelensky.

3) Zelensky eagerly invited Trump to his inauguration several times. "I think that it will still be great if you could come and be with us on this very important day of our inauguration," Zelensky said. It was clearly very important to him as a show of solidarity by the U.S. What we know now is that the U.S. planned to send Vice President Mike Pence to the inauguration in Trump’s stead until Trump blocked Pence's visit at the last second as a clear snub to Zelensky and his incoming administration. Instead, Energy Secretary Rick Perry led a considerably lower-level delegation to the occasion.

In any case, even the White House's supposed effort at transparency showed what a corrupt enterprise the entire Trump operation is.