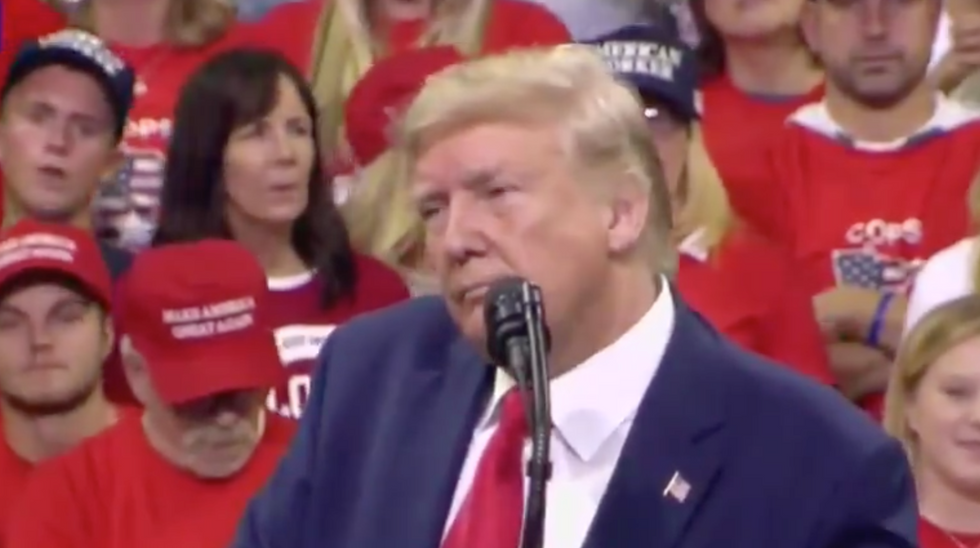 On CNN Saturday, former Lt. Gov. André Bauer (R-SC) tried to deflect from President Donald Trump's Ukraine scandal by changing the subject to Joe Biden and Hillary Clinton — only for host Victor Blackwell to shut him down.

"Let's start here with what we're getting from the Washington Post. Senators now willing to acknowledge, yeah, it was a quid pro quo," said Blackwell. "You think that's — one, are you willing to acknowledge what acting Chief of Staff Mick Mulvaney acknowledged, and do you think it's right for Republicans to do so too?"

"Jovial manner?" repeated Blackwell. "How did you get jovial out of a written partial transcript?"

"Again, he let the transcript out," said Bauer. "You can argue them any way you want, but, again, the real quid pro quo should be somebody says you're not getting money, we're going to hold it, I told him, and he says it in a video interview and his son is making $50,000 from the company that's being investigated."

"Okay. We should also say that what you're suggesting is that the Bidens did something wrong," said Blackwell. "There's no evidence to suggest that they did something wrong or that it's illegal ... André, if this was such a perfect call and you didn't see anything wrong with it, Lt. Col. Vindman testified this week — and he's the top Ukraine expert — he testified he was told by the White House lawyer John Eisenberg not to discuss the president's call. Then Eisenberg and other National Security Council lawyers put it in this higher security server. If it was such a perfect call, why was there so much energy inside the White House exerted to limit access, to keep people from talking about it, potential criminal referrals? if everything was okay, why were there so many career diplomats concerned about what the president said?"

"I don't know that they are," said Bauer. "You can find anybody to take anything out of context you want ... again, we're investigating something that's not nearly as quid pro quo that [Biden] on camera says, I withheld the money, and said—"

"Okay, can we please stop with this?" said fellow guest Tara Setmayer.

"I know you don't want to talk about it," said Bauer.

"Let's talk specifically about it," said Blackwell. "Most of the Western world wanted the Ukrainian general prosecutor Viktor Shokin removed because they felt he was not doing enough to investigate corruption, the European allies wanted him out. Christine Lagarde of the IMF was so disappointed with the work he did, that she was going to hold back billions of dollars. so you're trying to change and shift what actually was happening in 2016."

"It's like investigating Donald Trump and not Hillary Clinton when you want to talk about Russian collusion," said Bauer.

"Okay. We're done with this conversation," said Blackwell. "I thought this was going to be a talk about strategy from the Republicans who are now acknowledging quid pro quo. We hoped to get to the polling that shows that although we've seen three weeks of revelations, that 49 percent, just like they were three weeks ago, support the removal of the president after impeachment. Instead we had to go down this road of debunked conspiracies and fact-check for four and a half minutes."