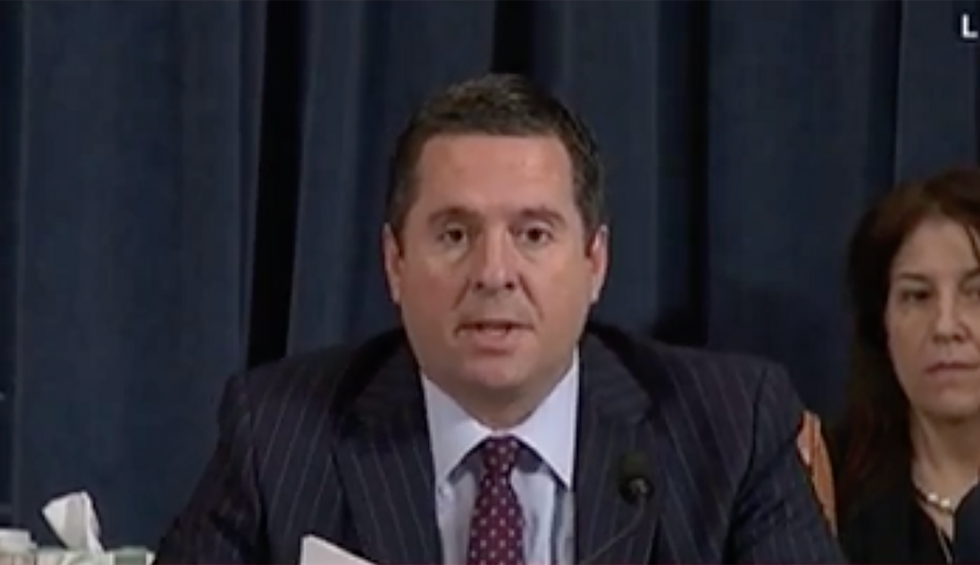 House Intelligence Committee Chair Devin Nunes was caught off guard on Thursday when a witness in the impeachment hearings rejected a favorite right-wing conspiracy out of hand. It was an amusing and revealing moment showing how deep Nunes is in the alternative reality crafted by President Donald Trump, Rudy Giuliani, outlets like Fox News, and others.

The moment came when he asked State Department official David Holmes about the so-called "black ledger," which documented payments former Trump Campaign Chair Paul Manafort received from former Ukrainian President Viktor Yanukovych. When the ledger was revealed in 2016, it prompted Manafort's removal from the campaign, and Republicans have alleged that it was part of a plot by the country to hurt Trump. During his questioning, Nunes asked if Holmes had heard of the "black ledger.” Holmes said he had.

“Is that seen as ‘credible’ information?” Nunes continued.

Holmes, who works at the U.S. embassy in Ukraine, replied simply: “Yes.”

“The black ledger is credible?” he asked.

“Bob Mueller did not find it credible," said Nunes. "Do you dispute what Bob Mueller’s findings were? They didn’t use it in the prosecution or in the report.”

“I’m not aware that Bob Mueller did not find it credible," replied Holmes. "I think it was evidence in other criminal proceedings. Its credibility was not questioned in those proceedings, but I’m not an expert on that.”

As Nunes goes back to the well of Ukraine 2016 conspiracy theories, Holmes shoots down his nonsense regarding the b… https://t.co/4MFj1AJHSq
— The Moscow Project (@The Moscow Project) 1574360705.0

The idea that the black ledger was some kind of smear campaign has been promoted by Giuliani, who heard it from none other than — you guessed it — Manafort.

“I said, ‘Was there really a black book? If there wasn’t, I really need to know. Please tell him I’ve got to know,’” Giuliani said of a discussion with Manafort’s lawyer. “He came back and said there wasn’t a black book."

Nunes was correct to suggest that Mueller didn't use the ledger in his cases against Manafort. But that doesn't imply Mueller didn't find it credible — there may be many reasons he didn't use it. And as the Intercept recently noted, the allegations that the ledger was made-up are unsupported:

Despite claims by Manafort to the president’s personal lawyer, Rudy Giuliani, that the ledger was a forgery, bank records described in an FBI search warrant, and reviewed by the Associated Press, confirmed that at least $1.2 million in payments listed in the records next to Manafort’s name were actually deposited in one of his firm’s bank accounts in Virginia. (A record of one of those deposits was subsequently made public by Leshchenko.)

Andrew Kramer, the New York Times foreign correspondent who first revealed the secret payments to Manafort, also reported at the time that others in Ukraine who were named in the ledger had confirmed that the records were genuine.

Serhiy Leshchenko, a Ukrainian journalist and a former member of the country's parliament, wrote of his decision to publicize the ledger:

I will always be angry at Manafort. His work contributed greatly to Yanukovych’s election victory in 2010; Yanukovych then used his position as president to enrich himself and his inner circle. I have no doubt that Yanukovych paid Manafort for his services out of the funds he robbed from Ukrainian taxpayers.

And Manafort has pleaded guilty to laundering money and evading taxes on the payments he received from Yanukovych, among others. He's been sentenced to more than seven years in prison for his crimes. He also failed to register as a foreign agent for this work at the time, as is required by law.

So while Republicans would like people to believe that the incident shows that foreigners were conspiring against Trump, what it actually shows is that the president had someone at the top of his campaign who received secret payments to work as an undisclosed foreign agent. And he was working for a since-deposed Ukrainian president who just happened to be an ally of Russia.