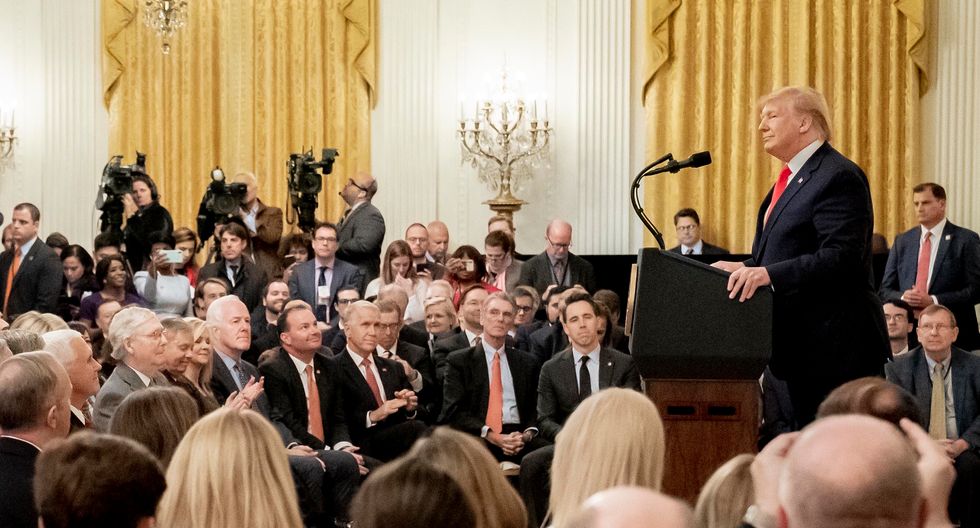 With the impeachment inquiry leveling up this month as public hearings begin, and with an election that might actually be the end of Donald Trump now less than a year away, the campaign to let Trump's Republican allies — even the most villainous offenders — move on and pretend this never happened is already underway.

Sadly, the clearest articulation of the let-bygones-be-bygones mentality has come from a Democrat — unsurprisingly, former Vice President Joe Biden.

Biden, who is still, somehow, the frontrunner in Democratic primary polling, spoke at a chi-chi fundraiser on Wednesday, and dropped this pearl of wisdom: "With Donald Trump out of the way, you’re going to see a number of my Republican colleagues have an epiphany."

The people Biden is talking about, let us remember, are not only fully capable adults, but people who believe they are qualified and deserving national leaders. They're not a bunch of adolescents who are just going through a temporary goth-libertarian phase or whatever. But there's no doubt that many Republicans are taking stock of the current political situation, in which Trump is daily cementing his historical legacy as the most embarrassing president ever elected, and plotting how to escape any and all reputational accountability for their role in our current national nightmare.

On Wednesday evening, the Washington Post published a story claiming that Attorney General Bill Barr, who has been the lickiest of Trump spittles since his appointment as Trump's main clean-up guy in February, declined to offer the same level of cover-up services on Trump's current Ukraine scandal that he previously provided on the Russia scandal:

President Trump wanted Attorney General William P. Barr to hold a news conference declaring that the commander in chief had broken no laws during a phone call in which he pressed his Ukrainian counterpart to investigate a political rival, though Barr ultimately declined to do so, people familiar with the matter said.

It's not surprising that Trump wanted Barr to stage a spectacle in which he lies to the American people to cover up for Trump's crimes. After all, Barr did exactly that in the ancient past of, oh, last April, when he embarked on a spin campaign to distort the findings of Robert Mueller's investigation into Trump's relationship with a criminal Russian conspiracy to interfere with the 2016 election. First though an alleged summary and then through a press conference — both before the release of Mueller's actual report — Barr went hard on the claims that there was nothing of great importance in the document. This turned out to be flat-out false, as Mueller found both extensive efforts at collusion and obstruction of justice and documented them in considerable detail in the novel-length report.

But now there are "people familiar with the matter" who want to make sure the press understands that Barr is suddenly none too keen on helping Trump cover up criminal conspiracies involving foreign governments.

The story about Barr turning his nose up at this particular criminal cover-up spread rapidly, often aided by left-leaning publications. Which is all understandable, since we all enjoy watching rats flying off a sinking ship and Trump flinging the word "fake" around in his usual pathetic response. But it's also unsettling, because Barr — sorry, "people familiar with the matter" — is only doing this because he wants a piece of that sweet post-Trump bygones action that Biden is proposing.

If our political class had any love for this country, they would not let Barr get away with this. The man is a lifelong opponent of democracy who hitched his wagon to Trump because he correctly assessed that Trump shared his love of authoritarian rule. If he abandons Trump, it will only because Trump no longer serves this goal, not because Barr suddenly had an "epiphany".

A similar situation is going on with the anonymously written upcoming book "A Warning," purportedly by the same "senior administration official" who wrote an op-ed for the New York Times last year. The book isn't out yet, but the tidbits being released appear geared towards the goal of making sure that many of the people who enabled and protected the Trump presidency can escape any kind of public accountability after he flames out.

The first bit of the book to be leaked suggests that "Anonymous" is casting a wide net of desired redemption. As reported by Yashar Ali of the Huffington Post, "highly placed White House officials did a back-of-the-envelope tally of which Cabinet members" would be willing to invoke their constitutional right to remove Trump and replace him with Vice President Mike Pence.

Pence himself is cast in a redemptive light in this telling, with the claim that "high-level White House aides were certain that Vice President Mike Pence would support the use of the 25th Amendment to have President Donald Trump removed from office because of mental incapacity."All of this should be taken with a many-carat grain of salt, as this supposed plot to remove Trump never actually happened and Pence continues to be an eager proponent of whatever nonsensical lies the White House tells on any given day to defend Trump's corruption. Moreover, Pence may be neck-deep in this Ukraine scandal himself, casting serious doubts about the veep's eagerness or ability to stay outside the Trumpian blast zone.

And, of course, we now also have Jeff Sessions, having disgraced his already disgraceful career by being Trump's attorney general for a time, eyeballing a return to his Senate seat, where he can pretend none of this ever happened.

Sadly, we will see more of these attempts at rehabbing various high-level Republicans as Trump's apparent implosion continues. The more likely it is that Trump is sent packing to Mar-a-Lago — or better yet, to federal prison — the more Republicans are going to pretend they barely knew the guy.

Unfortunately, as Biden's comments show, too many people are ready and eager to help Republicans out in their quest to recover their reputations, post-Trump. As New York Times columnist Jamelle Bouie noted on Twitter, "there will be a lot of 'respectable' voices urging us to 'look forward not back.'"

Just as happened after the debacle of the George W. Bush administration, the rehab process will probably work. Soon enough, we'll be seeing Pence, or possibly even Trump himself, hanging out with Ellen DeGeneres or some other liberal celebrity. A lot of powerful people have a lot of interest in making sure that those who aided and abetted this criminal presidency get away scot-free.

That doesn't mean that the rest of us should give in so easily. Refusing, every step of the way, to pretend that everything is cool and normal now and it's just like Trump never happened is critical. The more we refuse to play along with this charade, the more likely it is there will be real consequences for the people who did this to us. More important still, there will be less chance that they'll try to do it again.