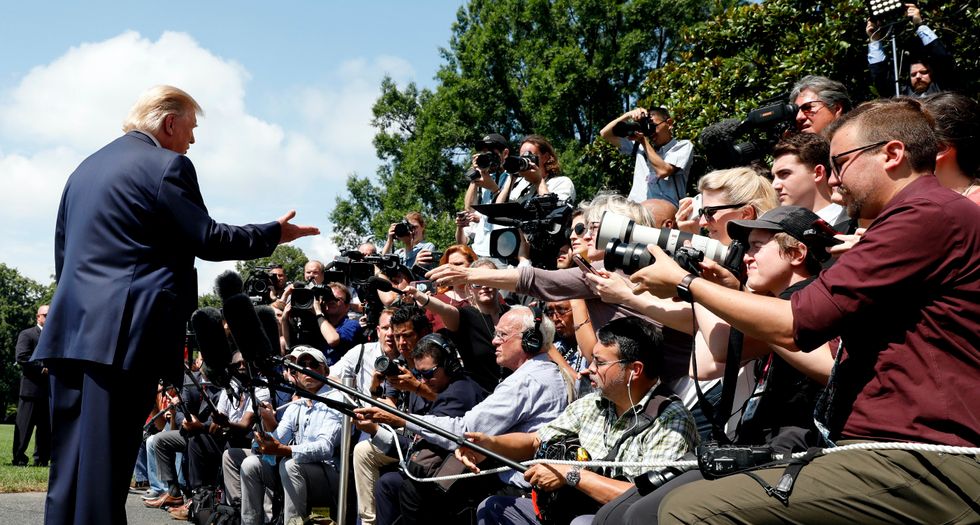 Republicans proudly advertised their radical ways during Wednesday's impeachment hearings into Donald Trump, wallowing in conspiracies and embracing debunked claims. The question now: How does the Beltway media cover a party that has aggressively removed itself from reality? How does the news business describe and treat a political party that routinely echoes the most unbelievable claims from Fox News and the darkest corners of the right-wing media?

Why this obsession? Because to concede that one party operates under a radically different set of guidelines (or no guidelines at all, in the case of the GOP), journalists have to do two things. They have to defend themselves against allegations of "liberal media bias," and they have to throw out the old, dependable rule book that allowed the press to lazily suggest that Republicans and Democrats function on the same plane, and therefore had to be treated similarly.

But how on earth do you watch the Republican performances during the public impeachment hearings and still cling to that claim? How do you pretend a party that spent hours asking witnesses about Alex Jones-type conspiracy theories somehow functions on a parallel track with Democrats, who spent the hearings ensconced in facts, testimony, and firsthand witness accounts?

The equivalent would be if, during a 2002 congressional hearing, Democrats had spent hours badgering witnesses with 9/11 Truther questions, and the press had pretended that it was totally normal. It's not! And neither is today's irrational and reckless GOP.

The problem is that the press won't accept that glaring fact. But there were signs after the first impeachment hearing that more and more D.C. journalists are willing to discuss just how far afield the Republican Party has gone as it follows Fox News down the rabbit hole. "We are living in a moment where we have a part of one of our major political parties that is just not accepting the premise, is just not accepting facts that are facts," conceded NBC's Chuck Todd.

Journalists really had no choice, given the stunning display Republicans put on at the hearings. And it wasn't just one or two rogue members who used their time to push fictional narratives about Ukraine supposedly double-crossing the United States during the 2016 American election, or claimed that there's simply no proof of an attempted "quid pro quo" with Ukraine, even though the White House transcript of a summer phone call with the country's leader clearly spells out exactly that.

It was the vast majority of Republican committee members, as well as the GOP's general counsel, who oversaw truly bizarre bouts of questioning that seemed to leave the witnesses at times stumped and confused, simply because the questions were not based in reality. Instead, they were based on close viewings of Sean Hannity's television program.

It wasn't spin or impassioned defense that was on display. It was up-is-down Orwellian rhetoric, and it had been telegraphed by Republicans for weeks, ever since the impeachment story broke, and ever since a parade of government officials began testifying about the obvious bribery scheme that was cooked up inside the White House. What happened with the hearings, though, was that the entire nation got to see the GOP’s descent into folly in full view.

But here's the key point: Most casual news consumers don't know that Republicans have become detached from reality as they watch the hearings unfold. (I mean, Republicans sound convincing when they spout convoluted claims about Ukraine working to elect Hillary Clinton.) And that's why it's important that journalists do their jobs and spell out what's truly going on, and not depend on the lazy both-sides crutch in order to avoid necessary truth-telling about the state of today's GOP.

This was a hallmark media failure during the Obama years, as the D.C. press steadfastly refused to report plainly on how radical the GOP was becoming. Republicans routinely obliterated Beltway precedents when it came to granting Obama the leeway that previous presidents were given by their partisan foes in Congress. Yet at each step along the way, journalists pulled back, refusing to detail the seismic shift taking place. Instead, news outlets  portrayed the obstruction as routine, and often blamed Obama for not being able to avoid the showdowns.

When Republicans wouldn't allow a vote on the Obama-backed background check bill in the wake of the Sandy Hook Elementary School gun massacre in Connecticut, even though the initiative enjoyed 90% public support, the press didn't depict the obstruction as radical. Instead, the news media often blamed Obama for not being able to work with Republicans. (He doesn't schmooze enough!)

When Republicans announced in the winter of 2016 that they would categorically ignore any Supreme Court nominee Obama put forward in the wake of Justice Antonin Scalia's death, the press pretended that it was Obama who was sparking a "partisan" fight simply by fulfilling his constitutional duty.

The impeachment hearings confirm that Republicans have taken complete flight from reality. It’s the media’s job to say so.