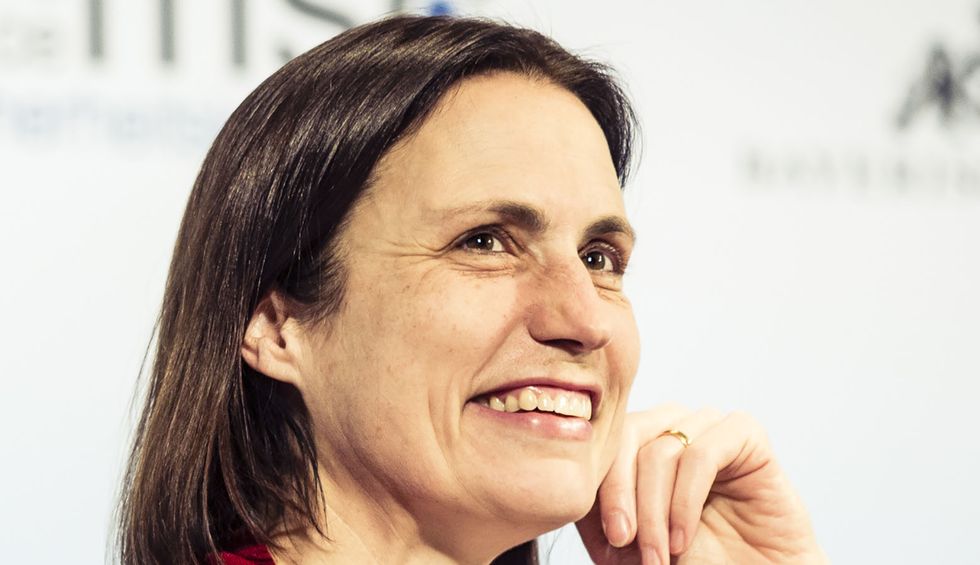 Anyone who has spent a lot of time listening to right-wing conspiracy theorist Alex Jones and his Infowars program has heard about the CrowdStrike conspiracy theory —which claims that during the 2016 presidential election, Democrats conspired with the cyber-security firm CrowdStrike to hack the Democratic National Committee (DNC), frame the Russian government for the hack and undermine Donald Trump’s presidential campaign. And the CrowdStrike theory plays a major role in the impeachment inquiry against President Trump, who specifically mentioned CrowdStrike when, on July 25, he tried to pressure Ukrainian President Volodymyr Zelensky to investigate former Vice President Joe Biden and his son, Hunter Biden.

Fiona Hill — a former National Security Council (NSC) senior director specializing in Russian and European affairs and a key witness in the impeachment inquiry — debunked the CrowdStrike theory during her public testimony on Thursday for the inquiry. And Hill, speaking on Capitol Hill, had a lot to say about Russian government interference in the 2016 election.

Here are some of the ridiculous claims of CrowdStrike conspiracy theorists that have been debunked by Hill and others during the impeachment inquiry presently taking place in the U.S. House of Representatives.

1. Ukraine, not Russia, interfered in the 2016 election

During his opening statement on Thursday morning, House Intelligence Committee Chairman Adam Schiff cited a key element of the CrowdStrike theory: that Ukraine, not Russia, interfered in the 2016 presidential election — and Schiff noted that Republicans pursued that “discredited conspiracy theory” in their pursuit of an investigation of the Bidens and the Ukrainian energy company Burisma. Hill, during her testimony, backed up Schiff’s assertions — stressing that it is “beyond dispute” that the Russian government, not the Ukrainian government, interfered in the 2016 election. And claims of Ukraine interference, Hill testified, is a “fictional narrative being perpetrated by Russian security serves.”

2. Vladimir Putin has been a victim of Democratic Party treachery

CrowdStrike theorists believe that Russian President Vladimir Putin has been unfairly maligned by Democrats and the “Deep State” — never mind the fact that a prominent Republican, former Special Counsel Robert Mueller, has asserted that the Russian government interfered in the 2016 election and won’t hesitate to interfere in the 2020 election as well.

3. The Bidens conspired against Republicans in Ukraine

CrowdStrike proponents claim that because Hunter Biden was on the board of the Ukrainian energy company Burisma, he was part of the Democratic/Ukrainian conspiracy against the Republican Party and the 2016 Trump campaign. But the testimony in the impeachment inquiry has made it clear that the Bidens did nothing wrong or illegal in Ukraine in the past. Democratic attorney Daniel Goldman asked Hill if she was “aware of any evidence to support” Ukraine-related “allegations against Vice President Biden” made by Republicans — and Hill replied, “I’m not, no.”

During his opening statement at Thursday’s hearing, another witness, David Holmes (U.S. diplomat to Ukraine) offered elaborate details about Zelensky trying to set up a meeting with Trump earlier this year and a hold being placed on military aid to Ukraine — with an investigation of the Bidens being a condition of the aid. Holmes testified that he specifically heard “the theory about CrowdStrike” being mentioned by Trump allies during that period. Holmes’ testimony clearly demonstrated that Trump and his allies, including former New York City Mayor Rudy Giuliani, were hoping to use Zelensky in their efforts to prove the debunked CrowdStrike theory and use it against the Bidens.

4. A missing DNC server is hidden in Ukraine

The CrowdStrike theory claims that a missing DNC server is being hidden in a warehouse somewhere in Ukraine, and that if that server could be found, it would totally vindicate Putin and Trump — and would show Democratic Party criminality. By pushing for an investigation of the Bidens by Ukraine, Giuliani and other Trump allies tried to prove that element of the CrowdStrike theory. But Hill, with her testimony, tore apart the idea that there is any hidden DNC server somewhere in Ukraine with incriminating evidence against Democrats.

Hill testified that one of Putin’s goals is to “pit one side of our electorate against another, pit one party against another.” And the Russian government, Hill’s testimony demonstrated, is accomplishing that goal with the extreme bitterness between Republicans and Democrats.

Promoters of the CrowdStrike theory often claim that CrowdStrike co-founder Dmitri Alperovitch is Ukrainian, which they see as “proof” of his willingness to conspiracy with the Ukrainian government and Democrats against Putin and Trump in 2016. But Alperovitch (a long-time U.S. citizen) isn’t from Ukraine: he was born in Moscow in 1980, back in the days of the Soviet Union. And the impeachment inquiry has demonstrated that Alperovitch and the firm he co-founded are not Ukrainian government operatives. Moreover, the company has worked with Republicans at times.