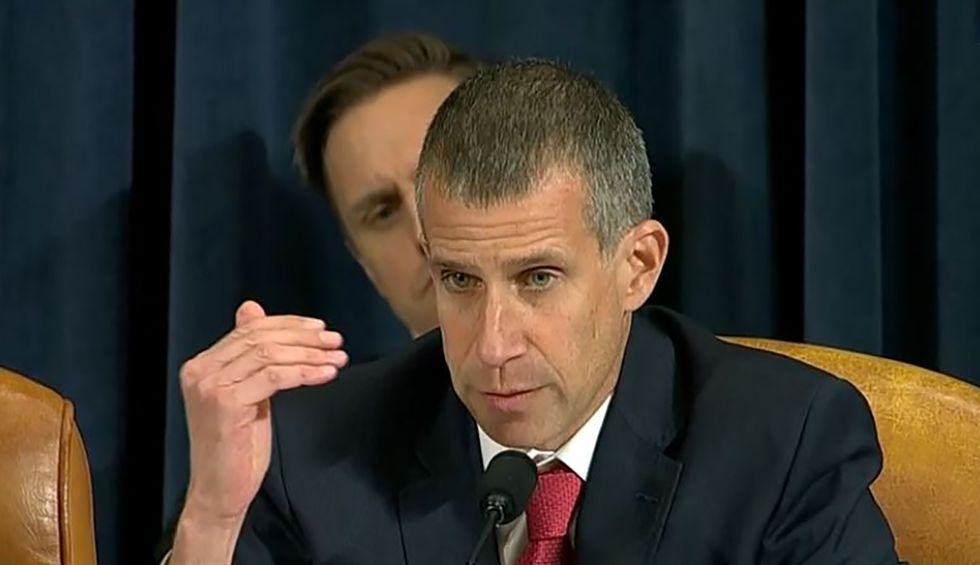 The final 10 minutes of the first period of questioning on Tuesday morning in the impeachment inquiry into Donald Trump consisted of GOP counsel Stephen Castor repeatedly hammering an effort to create an impression of divided loyalties on the part of Lt. Col. Alexander Vindman. During a meeting in Ukraine, Vindman testified, he was offered a position as Ukrainian minister of defense. Vindman immediately refused the offer and followed up by reporting the offer to his superiors.

Vindman testified that the offer was made in English, in front of two other American officials, and that he did not take it seriously. “I'm an American," Vindman said. “The whole notion is rather comical."

But Castor returned to this offer again and again, asking about it in different ways and probing about every possible person that Vindman may have spoken with. “I came here when I was a toddler, and I immediately dismissed these offers,” said Vindman. “I did not entertain them. It’s pretty funny for a lieutenant colonel in the U.S. Army, which isn’t really that senior, to be offered that illustrious of a position.”

The reason that Castor focused for so long on this incident, which has absolutely nothing to do with the subject of the inquiry, was clearly not that it had any bearing on the topics at hand, but that it allowed Republicans to continue a strategy of attacking the integrity of witnesses. In Vindman’s case, that has from the beginning included suggestions that, as an immigrant, he isn’t a “real” American, despite having served in the military for his entire adult life and having been wounded in combat in Iraq.

Republican counsel is now resorting to a despicable dual loyalty smear against an active member of the U.S. armed s… https://t.co/r7bqZopqVA
— The Moscow Project (@The Moscow Project) 1574180020.0