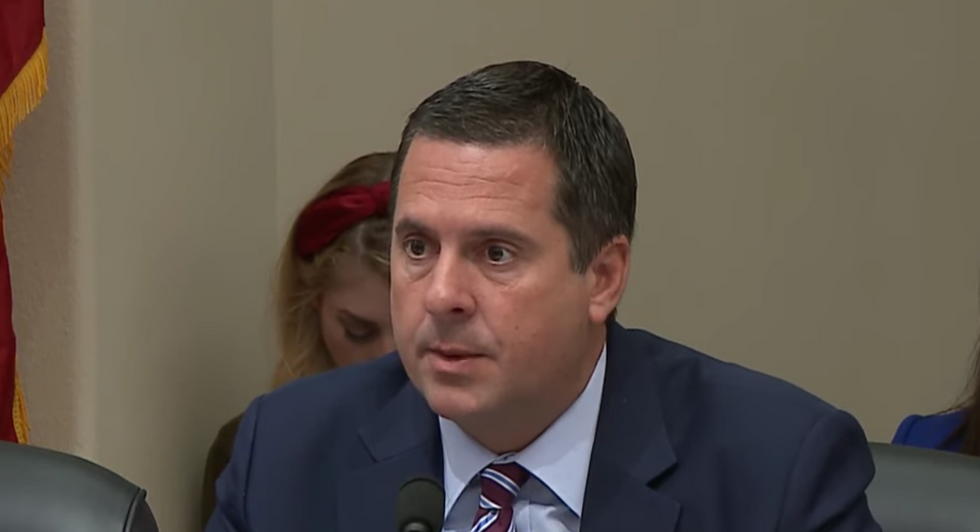 Since Republicans have no substantive defense of President Donald Trump's effort to extort political investigations out of the Ukrainian government, their big hope in protecting the White House from the impeachment inquiry relies on kicking up enough dirt and throwing up red herrings to distract voters and keep Republicans united.

As part of this effort, House Intelligence Committee Ranking Member Devin Nunes (R-CA) proposed nine witnesses from the GOP side for the forthcoming impeachment hearings, many of whom aren't relevant to the central questions of the inquiry.

One of those names is likely unknown the vast majority of the American public: Democratic National Committee consultant Alexandra Chalupa. But Politico revealed Tuesday with a new interview that Chalupa is actually willing to testify — and wants to call the Republicans' "bluff."

"I'm on a mission to testify," she said.

"It’s clear Republicans are gaslighting the public by putting me on their list of witnesses,” Chalupa continued. “It’s a bluff meant to smear and distract from Donald Trump’s impeachable offenses. I’m the last person Republicans want to testify publicly. My testimony would be especially damaging to Donald Trump, Paul Manafort, and Vladimir Putin. The GOP knows this.”

Republicans have picked up on Chalupa because she's involved in a counter-narrative the right-wing has developed in response to the revelations about Russia's efforts to help Donald Trump win the 2016 election. They allege that Chalupa was part of a Ukrainian effort to help Hillary Clinton, in particular by exposing Trump Campaign Chair Paul Manafort's overseas criminality.

Chalupa, a Ukrainian-American, says she did work at the Ukrainian embassy in 2016 to do research on Manafort. But she denies that she was conspiring with Ukrainian officials, saying the assistance they provided was minimal and that they didn't want to interfere in the U.S. election. The extent of her involvement is somewhat disputed, as Politico noted, and Republicans have jumped on the controversy:

Andrii Telizhenko, a 29-year-old former political officer in the Ukrainian Embassy who says he was tasked with helping Chalupa dig up dirt on Manafort in 2016, has gone further, claiming there was direct coordination between the DNC and the Ukrainian government.

Telizhenko met with Trump’s personal lawyer Rudy Giuliani earlier this year to discuss “Ukrainian collusion” with Democrats during the election, and Giuliani told Fox News last month that “Telizhenko has direct evidence” of the coordination.

Telizhenko's claims have not been proven, however. The DNC has said Chalupa conducted the Manafort research on her own, and the so-called “black ledger” outlining off-the-books payments Manafort received from Ukraine’s pro-Russia Party of Regions—and which ultimately forced Manafort’s resignation from the Trump campaign—was released by an independent Ukrainian government agency and publicized by a Ukrainian member of parliament.

Despite Politico's assertion now that claims of Ukrainian involvement in 2016 are unsupported, it made contrasting claims in 2017. In a story from January of that year, Politico claimed that Kiev officials had been "quietly working to boost [Hillary] Clinton." But that story was authored, in part, by Ken Vogel — who has since moved to the New York Times and was instrumental early on in pushing Rudy Giuliani's narrative about Joe Biden in Ukraine in 2019. Even that 2017 Vogel story, though, noted that whatever Ukraine "did was far less concerted or centrally directed than Russia’s alleged hacking and dissemination of Democratic emails." And this didn't even mention the social media campaign launched from the Kremlin targeting the election that Special Counsel Robert Mueller's investigation later revealed.

Chalupa now says that the allegations of Ukrainian involvement in the 2016 election are another strand of Kremlin disinformation.

“The whole story originated with the Kremlin,” she told Politico. She said she had been sounding the "alarm bells" about Manafort since 2014, since Ukrainians new how dangerous he was.

One claim often overlooked as Republicans accuse Democrats of "colluding" with Ukraine is that it's Manafort who acted as an undisclosed foreign agent for Ukraine, promoting the interests of the pro-Russia former President Viktor Yanukovych. Even if the strongest allegations against Chalupa were proven, they'd be substantially less shocking than the top official in the Trump campaign being secretly on the payroll for Russian interests.

House Intelligence Committee Chair Adam Schiff (D-CA) seems unlikely to permit Republican witnesses that are viewed as a distraction the case at hand to appear during the public impeachment proceedings. It's unclear if Chalupa's apparent willingness to testify — assuming she's not bluffing — would convince him otherwise.