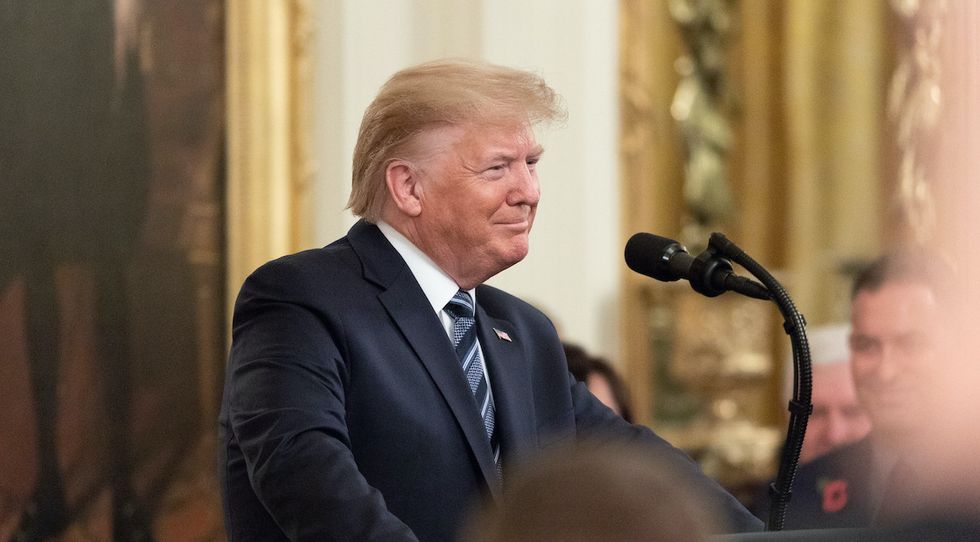 President Donald J. Trump addresses remarks prior to presenting the Presidential Citizens Medal posthumously to Richard “Rick” C. Rescorla on Thursday, Nov. 7, 2019, in the East Room of the White House. Rescorla helped save the lives of nearly 2,700 people at the World Trade Center on the morning of September 11, 2001. (Official White House Photo by Joyce N. Boghosian)
Cody Fenwick
November 09, 2019Trump

House Democrats have led an impressively focused and productive impeachment inquiry into President Donald Trump so far, amassing a staggering amount of testimony and evidence that is continuing to build a compelling case for removal. Republicans, on the other hand, appear completely uninterested in actually answering questions about the president's wrongdoing — or even finding any credible evidence that might be even somewhat exonerating — and are instead doing their best to bolster Trump's public relations strategy.

One key part of this evolving strategy, now that the evidence Ukraine was being bribed for investigations into the president's enemies is beyond a reasonable doubt, is to find a scapegoat.

Since there clearly was a quid pro quo offered to Ukraine — military aid and White House meeting in exchange for investigations of Joe Biden and the Democratic National committee — Republicans are tempted to say Trump wasn't involved in it.

One candidate is U.S. Ambassador to the European Union Gordon Sondland. This week, Sondland finally admitted that he told the Ukrainians that they wouldn't get congressionally approved military aid unless President Volodymyr Zelensky announced investigations into Biden and the DNC.

But, as I've noted, Sondland was particularly cagey about how and why he gave this ultimatum to the Ukrainians. He said he "presumed" the aid was dependent on an announcement but doesn't say how he came to understand the linkages.

Frankly, this is not believable. Sondland's new revelation came after he previously withheld this information from Congress and misled lawmakers about the issue. Now, he is claiming that he gave an extremely provocative — and potentially criminal — ultimatum to the Ukrainians without a clear understanding that it was the president's intention? This strains credibility and suggests he's covering up for Trump.

But Trump seems to be angling to pin the blame on Sondland. On Friday, Trump had this exchange with a reporter, as transcribed by MSNBC's Steve Benen:

TRUMP: Let me just tell you, I hardly know the gentleman. But this is the man who said there was no quid pro quo, and he still says that…. Everybody that’s testified, even the ones that are Trump haters, they’ve all been fine. They don’t have anything.

(Note: While Sondland has said Trump claimed he wasn't offering a "quid pro quo," the actions and offers to the Ukrainians do, in fact, constitute precisely a quid pro quo.)

Trump's claim that he barely knows Sondland isn't credible. Multiple witnesses testified that Trump spoke frequently with Sondland. Tim Morrison, a White House official who testified in the inquiry, said that he grew concerned about Sondland's actions and checked in with Trump's executive secretary to confirm he had actually been in touch with the ambassador. Sondland's claims to have spoken to Trump checked out every time, Morrison said. And, incidentally, Sondland gave Trump's inaugural committee $1 million — which is presumably why Trump made him an ambassador in the first place.

The Washington Post reported Thursday that Republicans in the House of Representatives are looking to potentially make two other people Trump's "fall guys": Rudy Giuliani and White House Chief of Staff Mick Mulvaney.

Giuliani, of course, has been perceived as a loose cannon for more than a year now in his role as Trump's personal lawyer, so he's a natural figure to throw under the bus for the president. Many of his public statements — presumably in Trump and his own defense — have actually made things worse for the president.

But trying to pin the bribery scheme on Giuliani falls short. First of all, it was entirely inappropriate for Trump to direct his administration to work with Giuliani, his personal lawyer, on diplomacy with Ukraine. Even if Trump had no idea what else was going, this was wildly inappropriate; Trump should be held responsible for Giuliani — whose stability has been called into question for months — acting wrongly under his auspices, regardless of whether he knew the details.

However, it's clear Trump knew exactly what was going on. We need no more evidence than the call memo of Trump's conversation with Zelensky, in which he clearly set up a quid pro quo. Trump said that the United States had been good to Ukraine, but that that hadn't always been "reciprocal." Then Zelensky brings up an ask related to the United States' military aid, and Trump says the infamous word: "I would like you to do us a favor, though." He then names the investigations of the DNC and Biden.

That, many argued at the time, was clear and decisive evidence of a corrupt bribery scheme all on its own, and was suitable grounds for impeachment. Everything else we've learned is just gravy on the main course of high crimes.

If you were skeptical that Trump was really offering a quid pro quo in that call — a skepticism that strains credibility, it must be said — then all the other evidence that Trump officials and aides were working to set up the quid pro quo should silence any doubts. We don't need to wonder whether Trump was involved in the other aspects of the quid pro quo, because we have indisputable evidence of him at the heart of the scandal on July 25 saying: "I would like you to do us a favor, though."

All these reasons are sufficient to reject Mulvaney as the scapegoat, too. New evidence does show that Mulvaney was even more central to the scheme than we knew before — even as he refuses to testify — and he has already said that Trump withheld military aid to Ukraine as leverage to get what he wanted.

But it would not be credible to suggest that Mulvaney was freelancing on this. We know that Giuliani was involved as Trump's personal lawyer, and we know that Sondland was frequently talking to Trump as he carried out negotiations with Ukraine. There's no plausible scenario in which Mulvaney went rogue and yet was on the same page as Sondland and Giuliani.

And, for that matter, it was widely reported that Trump personally directed the Office of Management and Budget to withhold the aid to Ukraine, a finding the president Trump has never denied. In fact, he has defended the hold, saying he was trying to fight "corruption." At the same time, a mountain of evidence indicates that this decision was entirely at odds with the assessment of the national security apparatus.

No matter how they try to deny it, nothing Republicans can say will change the fact that Trump is at the center of this scandal.