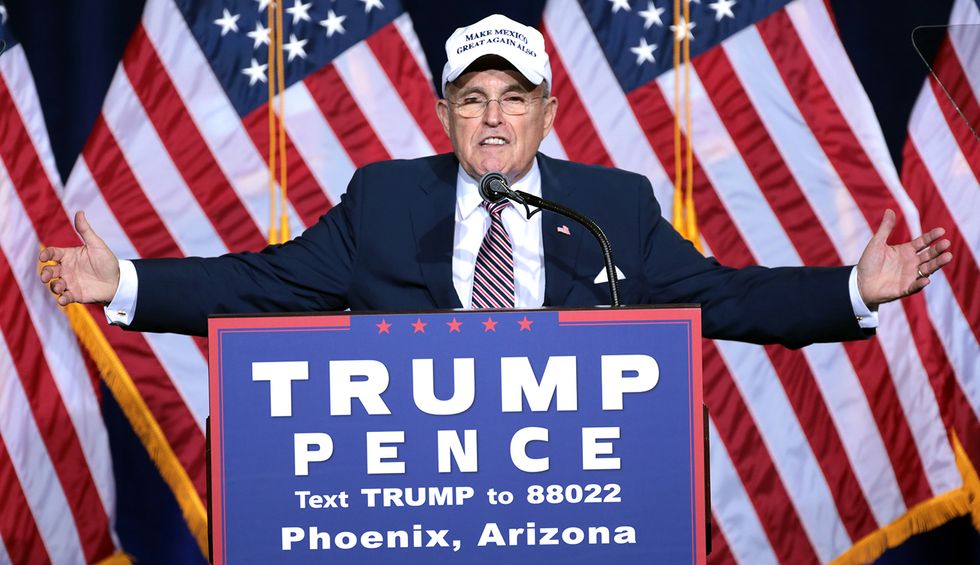 During the 2016 campaign candidate Donald Trump was always a bit odd about Russia. He claimed he knew Russian President Vladimir Putin, then denied he knew him a dozen different times. He insisted that the Russian president thought he was a genius based upon a mistranslated comment. We now know that the entire top tier of Trump's campaign was eager to accept "dirt" from Russia on his Democratic opponent in June of 2016. But in real time one of the first clues that something was weird with Trump and Russia was the fact that his campaign changed only one aspect of the Republican platform: military aid to Ukraine, of all things.

Robert Mueller was unable to prove there was anything nefarious about that request, only concluding that the Trump campaign adviser who made it had conversations with the Russian ambassador and had called Trump's top foreign policy adviser, Jeff Sessions, at the time. Why this was the only policy change in the entire convention remained a big mystery.

It's now been reported that Ukraine has been on Trump's mind since at least June of 2016, when news reports started to surface about Russian hacking of the Democratic National Committee. According to documents released to BuzzFeed under the Freedom of Information Act, Trump's campaign chairman at the time, Paul Manafort, told him that Ukraine was likely responsible for the hacking, not Russia. As time went on and it became obvious that the hackers were actively helping his campaign, Trump latched on to that alternative narrative.

According to interviews with Manafort's deputy Rick Gates, who participated in the campaign at the highest level, this theory was first shared by none other than Konstantin Kilimnik, a pro-Russian Ukrainian with apparent ties to Russian intelligence who served as Manafort's conduit to Russian oligarch Oleg Deripaska, to whom Manafort owed millions of dollars. This theory was evidently passed around at meetings with top campaign officials as they tried to figure out how to access the hacked material themselves.

Gates also told Mueller's team that Gen. Michael Flynn, Trump's first national security adviser, agreed that it was likely Ukraine had done the hack, because U.S. intelligence agencies were so incompetent that their conclusion it was the Russians had to be incorrect.  Apparently, Flynn believed he could use his intelligence sources to get hold of those "missing emails." It never occurred to any of them, apparently, that Russia wasn't trying very hard to hide its tracks for a reason.

Just after the Republican convention in July 2016, Trump was asked about the Russian invasion of Crimea. In fact, it was at the same press conference when he made the famous "Russia, if you're listening" comment that he said this:

I asked @realDonaldTrump:"Would you as president want to recognize #Crimea as Russian, lift sanctions?" - "Yes we would be looking at that"
— MareikeAden (@MareikeAden)1469633926.0

It's possible that Trump simply didn't know what she was talking about. But now that we know campaign officials were obsessively talking about Ukraine during this period, that seems less likely. It also seems less likely that the change in the platform was just a weird decision by one low-level staffer. Trump and his campaign were already building their case that Russia was not behind the hacking. It's easy to understand why Manafort would push this. He was under investigation by the Ukrainians at the time. And Flynn was openly hostile to the intelligence community because it had rightfully discerned that he was batshit crazy, and had successfully had him removed from his highly sensitive position as head of the Defense Intelligence Agency.

Why was Trump so eager to exonerate Russia? That can be explained in a number of ways. He wanted a Trump Tower Moscow deal so badly he could taste it. The rumors that Russians were helping his campaign were floated almost immediately from the time the DNC hack became public. Despite his eagerness to work with them, Trump wasn't so naive that he didn't realize that might not look good to the public. (He's been much less cautious since he became president, going out of his way to please Putin and consistently defying those who tell him it's not a good idea on either a policy or a political basis.)

Why Trump has tilted so strongly toward Russia remains the burning question of the Trump era and we may never know the answer. But whatever motivated him has pushed him to make decisions that led to his inclusion in the exclusive club of presidents who have been investigated for impeachable crimes.

It is probable that the extent of Trump's experience with Ukraine prior to the 2016 campaign was leering at Miss Ukraine in the Miss Universe pageant dressing room. But according to the Washington Post, his hostility toward the country, fed by cronies such as Manafort, Giuliani and Flynn (along with some possible whispered sweet nothings by a certain strongman) is intense:

Three of President Trump’s top advisers met with him in the Oval Office in May, determined to convince him that the new Ukrainian leader was an ally deserving of U.S. support.

They had barely begun their pitch when Trump unloaded on them, according to current and former U.S. officials familiar with the meeting. In Trump’s mind, the officials said, Ukraine’s entire leadership had colluded with the Democrats to undermine his 2016 presidential campaign.

“They tried to take me down,” Trump railed.

Energy Secretary Rick Perry, the senior member of the group, assured Trump that the new Ukrainian president was different — a reformer in Trump’s mold who had even quoted President Ronald Reagan in his inaugural address, for which the three advisers had been present. But the harder they pushed in the Oval Office, the more Trump resisted.

“They are horrible, corrupt people,” Trump told them.

These Trump advisers seemed to take him at his word, as do others quoted in the story. But we know that Trump had an ulterior motive for resisting the aid to Ukraine, don't we? He needed something to bribe Ukrainian leaders with so they would announce they were going to investigate the 2016 election and Joe Biden's alleged corrupt dealings. It served his purpose quite well to say that he actually believed they were "horrible, corrupt people." Even he isn't so brazen that he would tell his advisers that he wanted Ukraine to smear a political opponent and get Russia off the hook for its sabotage of the 2016 election, so maybe hold off on giving the Ukrainians any aid until they're desperate enough to cooperate.

Rudy Giuliani, who has been meeting with Ukraine officials since 2017 about this, and who admitted to consulting with Manafort as well, has clearly been spinning this Ukraine conspiracy theory with Trump ever since 2016, waiting for the Mueller report to be released to put the screws to the Ukrainian government. But hubris got to Trump, who foolishly made the ask himself, setting off alarms that can't be turned off.

Donald Trump extorted a foreign government to take down a political opponent and in the process hampered their abil… https://t.co/iqAhsWEs27
— Grudgie the Whale (@Grudgie the Whale)1572796241.0

If you think of Trump's Ukraine conspiracy theory as the cover-up operation for his 2016 crimes, the whole thing makes a lot more sense.