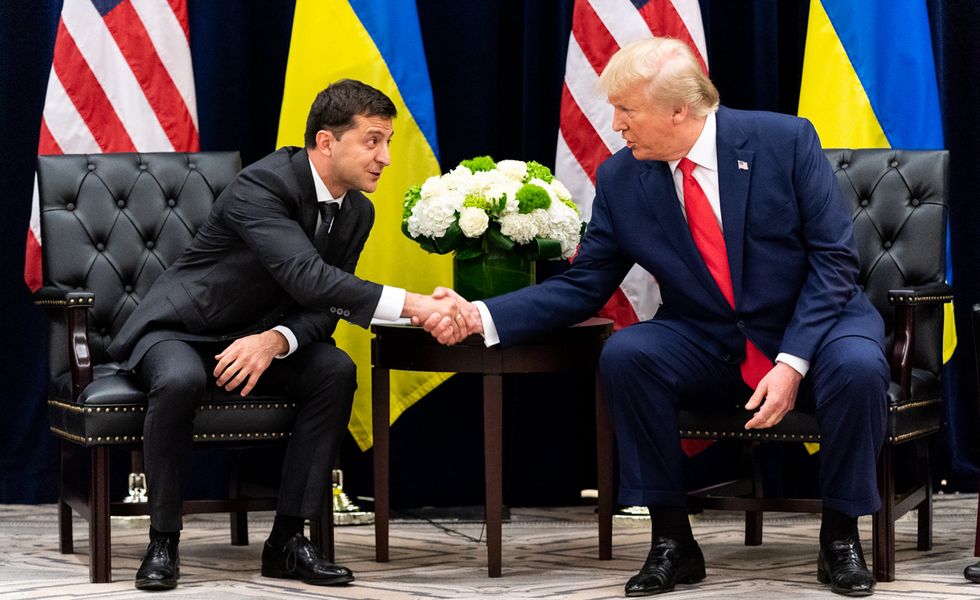 New testimony released Monday from the House Intelligence Committee's investigation of the Ukraine scandal included at least two new stunning details about the quid pro quo scheme at the heart of the matter.

Overall, the transcripts for depositions of Catherine Croft and Christopher Anderson, who were advisers to U.S. envoy Kurt Volker, built on the story of that we already know: that President Donald Trump pushed a shadow foreign policy to pressure Ukraine into investigating his political opponents, a scheme that involved using his office and military aid as leverage over the country in opposition to the official policy.

But testimony from Laura Cooper, Deputy Assistant Secretary of Defense for Russia, Ukraine, and Eurasia, included two new details about the scheme that we hadn't previously been aware of.

Here's the key portion of her testimony:

Cooper: But towards the end of August when [Volker] met with me for what, you know, I thought was going to be you know just a routine touch base on Ukraine, but also I thought it was going to be a strategizing session on how do we get this security assistance released knowing that we both—we both wanted the funding released. So in that meeting he did mention something to me that, you know, was the first about somehow an effort that he was engaged in to see if there was a statement that the government of Ukraine would make that would somehow disavow any interference in U.S. elections and would commit to the prosecution of any individuals involved in election interference. And that was about as specific as it got.

Q: Okay. Did he indicate to you that if that channel he was working was successful it might lift this issue?

This section doesn't seem to be garnering as much attention as it's due. It suggests that the plot Trump was engaged in is even darker than is usually suggested by the president's critics.

Trump's demand that Ukraine investigate the 2016 election and former Vice President Joe Biden has been described as asking President Volodymyr Zelensky to "dig up dirt," "manufacture propaganda," or "interfere" in the 2020 election — descriptions which may all be accurate. But what's often overlooked is the fact that the demand for an investigation of specific people, people who happen to be American citizens and his political opponents, is a gross violation of civil liberties. Investigations are supposed to be started because law enforcement agents develop a factual predicate to suspect a crime may have committed, not because a politician demands it.

And as the bolded section above suggests, it seems the Trump team wasn't just asking for an investigation — which would be bad enough — but asking for Ukraine to commit to prosecutions. This is completely inappropriate and corrupt because a person's involvement in a crime does not necessarily mean they are culpable or worthy of prosecution. Asking a foreign country to commit to prosecuting "any individuals involved in election interference" before any such investigation has been conducted is a step beyond the damning scandal that has already been uncovered. Especially because, given the leverage Trump held over Ukraine, the country could have easily concluded that he wanted prosecutions no matter what the facts showed.

Second, this passage also indicated that Volker knew about the link between the military aid and the announcement of investigations — two key components at the heart of the quid pro quo. It's not clear whether he passed along this ultimatum to the Ukrainians, as Ambassador Gordon Sondland has admitted to doing. But Cooper's testimony indicated he made the connection before he even knew about the contents of the phone call between Trump and Zelensky in which the demands were made explicit.

This finding extends the circle of people who were directly aware of the aid-for-investigations bribery effort, and bolsters the already strong case that the Ukrainians themselves could have easily deduced the connection even before Sondland gave the ultimatum. The New York Times reported that Ukraine was on the verge of making the announcement Trump wanted in mid-September, but officials backed out when the military aid to the country was surprisingly released.

Cooper's claim also seems to undercut some of Volker's own testimony. In a statement, he told Congress of the aid and the statement of the investigations: "I did not perceive these issues to be linked in any way."

And while being questioned by Chair Adam Schiff (D-CA), Volker resisted the suggestion that Ukraine would have felt pressure to announce the investigations because of the hold on the aid. At one point, Schiff asked: "You would agree that when Ukraine learned that the U.S. was withholding military assistance that it desperately needed, that the president's request to investigate his opponent carried that much more weight and urgency?"

Volker responded: "I can't say that. I don't — I think that the sequence of events goes the other direction." However, according to Cooper's testimony, that seems to be exactly the inference that he drew from the situation.

Volker also suggests that the Ukrainians only found out late in August, to his knowledge, that the aid had been withheld, though he admits he's not sure on the date. He indicates that they might have found out on Aug. 28, when Politico revealed the fact publicly in an article. But Croft told Congress that Ukrainians spoke to her about the delayed aid "much earlier" than the time it became public.

It's not clear Volker every directly lied to Congress, but his answers seem to have been cagey and in tension with other testimony. It certainly appears he tried his best to minimize the president's conduct and its impact, especially as they related to him, even while he admitted damning facts about Trump.