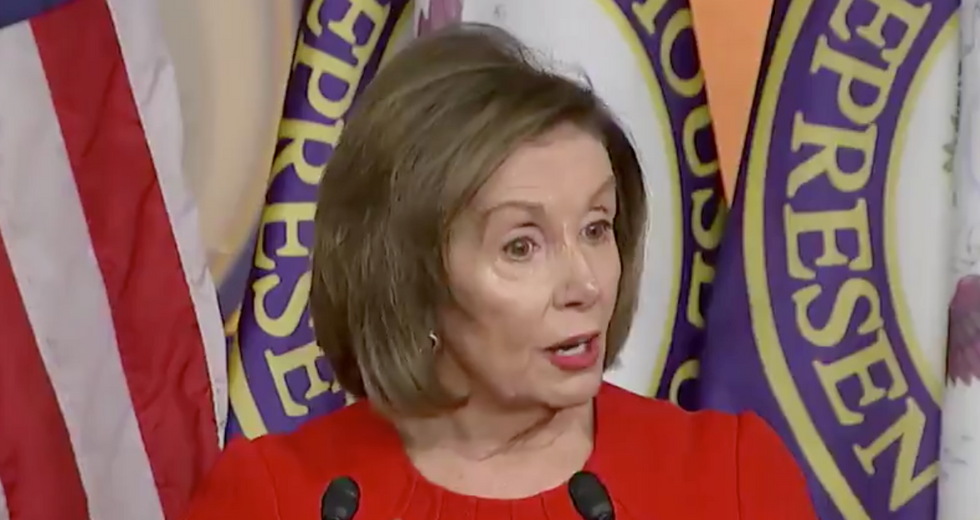 House Speaker Nancy Pelosi repeatedly pounded home on Thursday the idea that "bribery" is a central charge in the impeachment inquiry surrounding President Donald Trump's Ukraine scandal during a briefing with reporters.

"The devastating testimony [on Wednesday] corroborated evidence of bribery uncovered in the inquiry and that the president abused power and violated his oath by threatening to withhold military aid and a White House meeting in exchange for an investigation into his political rival," she said of the previous day's pubic hearing. "A clear attempt of the president to give himself the advantage in the 2020 election. Doing so, as I've said to the president, jeopardized our national security, undermined our national security, jeopardized the integrity of our electoral system."

She emphasized that "bribery" is listed in the Constitution as one of the two named impeachable offenses.

.@SpeakerPelosi on yesterday's #ImpeachmentHearings: "Yesterday was a very somber prayerful day. I thought it was a… https://t.co/IwjzdQiJti
— CSPAN (@CSPAN)1573748230.0

At one point, a reporter asked why — given her comments — the public shouldn't assume that the House is "dead-set" on impeaching the president already.

"All this milieu is a seeking of the truth," she said. "It's called an inquiry."

She then subtly mocked Trump, suggesting he wouldn't understand a word she was using.

"And if the president has something that is exculpatory" – she then paused and turned to look right at the camera – "Mr. President, that means if you have anything that shows your innocence" — she turned back to the reporter — "then he should make that known. And that's part of the inquiry. And so far, we haven't seen that. But we welcome it. And that's what an inquiry is about."

Pelosi with some serious shade for Trump: "If the president has something that is exculpatory -- Mr. President, tha… https://t.co/taZfkdmBuI
— Aaron Rupar (@Aaron Rupar)1573748869.0

Pelosi's frequent use of the word "bribery" — a word that Democrats and other observers have been adopting in place of "quid pro quo" for a number of reasons — was taken as a strong signal that the House Judiciary Committee is likely to focus at least one article of impeachment specifically on this charge.

The decision has advantages and disadvantages. While it's not clear Trump's conduct could plausibly be charged under the federal criminal bribery statutes, the term is mentioned in the Constitution itself as an impeachable offense, which certainly makes such a charge appealing. It avoids debates about whether the act in question is truly covered by the vague, catch-all impeachment term, "high crimes and misdemeanors."

At the same time, the use of "bribery" in the Constitution as an impeachable offense would seem to most naturally refer to a public official who accepts a bribe, rather than one who makes one. But this is conceivably an interpretation of Trump's actions, too. He was plausibly trying to get Zelensky to bribe him by opening the investigations he demanded in exchange for the military aid and White House visit, which were officials acts on Trump's part.

The one reasonable objection to using bribery in this sense is that presidents do this kind of thing all the time — apply financial or other forms of pressure on foreign countries do get outcomes they desire. That's why Democrats focused on the first day of public hearings, and will likely do so in the future, on the fact that asking for investigations of Americans is not how presidents are expected to use their foreign policy power. And since the investigation of former Vice President Joe Biden that Trump wanted was much more clearly in his personal interest, rather than the national interest, it was clearly a corrupt act.