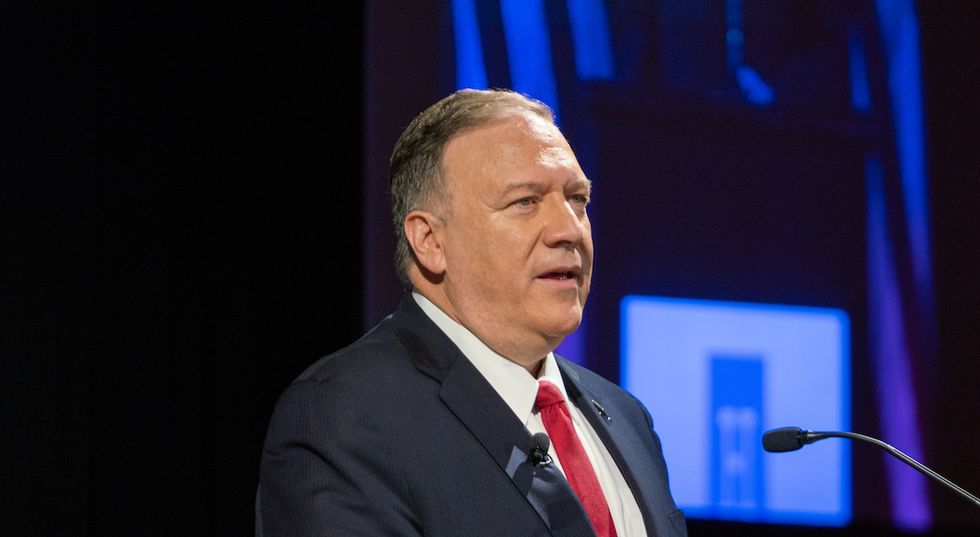 Michael McKinley, a career diplomat and a former top adviser to Secretary of State Mike Pompeo, delivered a harsh indictment of his former boss's treatment of the civil service in testimony to the congressional impeachment inquiry, a new transcript revealed on Monday.

Having worked in the State Department for 37 years, McKinley abruptly resigned at the end of September in the wake of the ballooning Ukraine scandal. In his testimony, he made clear that his resignation was driven by the administration's treatment of former Ambassador to Ukraine Marie Yovanovitch and the department's failure to defend her. His recounting of these events painted a craven and weak portrait of Pompeo, who refused to help Yovanovitch despite the attacks she has endured.

"Her reputation was as an excellent, serious, committed, up-and-coming back in the earlier years before any of us had ambassadorial or DCM positions," he said of Yovanovitch, noting that he wasn't personally close to her. "I certainly remember her being one of those people who seemed to be destined for greater things."

But Yovanovitch was ousted from her position by Trump following a smear campaign that is still being unraveled, but which involved Rudy Giuliani as well as his indicted associates.

McKinley said that he wasn't aware of these reasons for her ouster when she was withdrawn from Ukraine last spring. But after the September release of the memo of Trump's phone call with Ukrainian President Volodymyr Zelinsky — in which Trump trashed Yovanovitch and made a vague and ominous remark that she was "go through some things" — McKinley felt the State Department needed to support her.

And McKinley said he wasn't the only one concerned. Her negative treatment was impacting the morale of the foreign service.

"My sense was that the impact was significant, in that people were expecting some kind of statement of support for Yovanovitch," he told lawmakers.

So he said he went to Pompeo directly and suggested that a statement be put out to support Yovanovitch as press attention became focused on the former ambassador. He said he ended up talking to Pompeo about the issue three times, but the secretary barely acknowledged the request. No statement of support was ever made.

As CNN's Manu Raju noted, Pompeo appears to have blatantly lied about these interactions. On ABC News in October, Pompeo said, "From the time that Ambassador Yovanovitch departed Ukraine until the time that he [McKinley] came to tell me he was departing, I never heard him say a single thing about his concerns with respect to the decision that was made. Not once. Not once ... did Ambassador McKinley say something to me in that time period."

As Pompeo has since acknowledged, the secretary was actually on the phone call between Trump and Zelensky in question. McKinley said Pompeo gave no indication of this fact when they discussed the matter. And Pompeo clearly tried to mislead viewers in an earlier news clip in which he implied that he knew nothing about the call.

McKinley also said he directly raised the issue of the department's lack of support when he resigned to Pompeo.

"And in presenting my resignation, I made clear that I was looking to leave the department, I wasn't looking to create any news story out of it, but that he should be aware that, of course, part of the reason, people were very aware that I was concerned about what I saw as the lack of public support for department employees," McKinley said. "I said: It's time to move on, look at a next phase of my life, I don't believe this will have any major impact, but you are aware that people are aware that I've been concerned about what is the lack of support for department officials."

When it was announced McKinley was resigning, Pompeo had tried to downplay the development and suggest that it wasn't tied to the Ukraine scandal.

“I don’t talk about personnel matters, but I’ve known Mike McKinley for quite some time, and he’s been with the State Department for 37 years,” Pompeo told a CNN affiliate after the announcement. “He told me for lots of good and sufficient reasons for him and his family he wanted to go on and begin the next phase of his life.”

The testimony isn't entirely negative about Pompeo. McKinley noted that after Pompeo replaced former Secretary of State Rex Tillerson — who has been called by some "the worst secretary of state in history" — there were significant improvements in the department.

"[Pompeo] does deserve credit for rebuilding the institution, processes, creating opportunities, and, frankly, ambitions for the foreign service," McKinley said.

But this just highlights the fact that McKinley doesn't seem to be going after Pompeo with a partisan agenda. He's just painting a picture of a secretary who betrayed the department and did nothing to defend his people when they were under unwarranted attack from the president and others. And on top of that, he seems to have repeatedly lied and misled people about the facts at multiple points in the scandal.

McKinley said that the department's silence on the Yovanovitch matter was "puzzling and baffling." But there's nothing surprising about it if you realize that Pompeo primary motivation is to please Trump and ingratiate himself to the president, even at the expense of the department he's supposed to lead. That's one of the reasons it's so troubling to have a president who chooses sycophants to work under him.

The testimony made clear that for McKinley, who isn't a Trump sycophant, working under such a craven person became untenable.

"[To] see the emerging information on the engagement of our missions to procure negative political information for domestic purposes, combined with the failure I saw in the building to provide support for our professional cadre in a particularly trying time, I think the combination was a pretty good reason to decide enough, that I had I had no longer a useful role to play," he said. "I don't make the decisions on how issues should be handled. But I felt that on the central question on which I've built much of my career, which is supporting our people in the department, if I wasn't able to make any sort of impact in arguing for something I saw that is extremely straightforward and rather limited, then perhaps there were questions about whether I could continue to influence things, and so I decided to separate."