Mike Pompeo called on to resign or be impeached himself 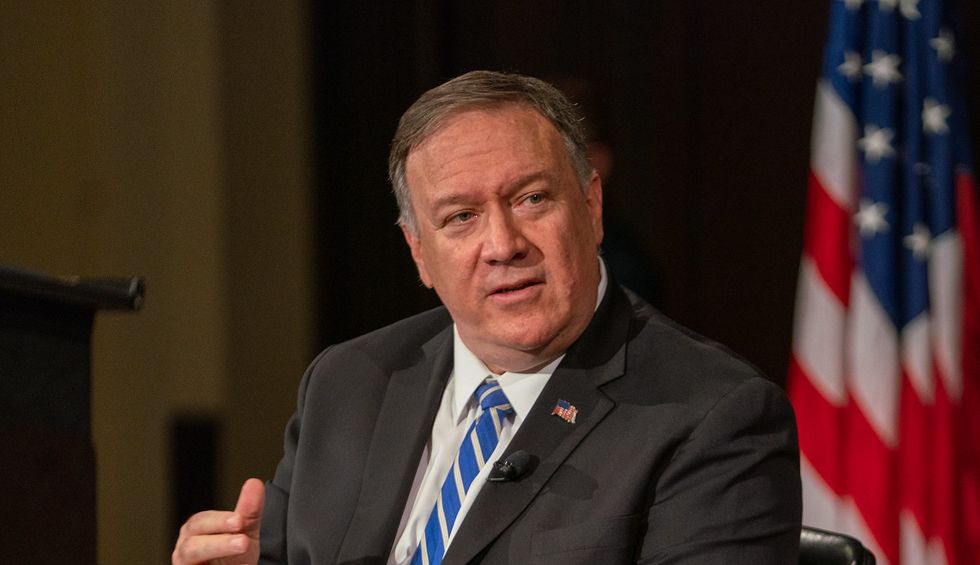 After Ambassador Gordon Sondland implicated Secretary of State Mike Pompeo in the Ukraine scandal during his impeachment testimony on Wednesday morning, calls arose for him to resign — or to be impeached himself.

“Sondland puts Pompeo right in the middle of Trump’s bribery scheme,” former federal prosecutor Joyce Vance told Jennifer Rubin of the Washington Post. "And, Pompeo, who listened in on the July 25 call, knew what was at stake — Trump was forcing [Ukrainian President Volodymyr Zelensky to announce an investigation into the Bidens that was politically valuable to Trump’s 2020 campaign.”

Vance added: “Pompeo, top of his class at West Point and a graduate of Harvard Law, knew it was wrong."

Rep. Adam Schiff: "[Pompeo] was aware of the connections that you were making between the investigations and the Wh… https://t.co/ocHzDEqAdw
— The Hill (@The Hill)1574277246.0

Rubin agreed, and observed that unlike the president, Pompeo has no protection from legal exposure.

"The House Intelligence Committee should make a criminal referral, subpoena Pompeo for testimony and proceed with impeachment proceedings if he doesn’t comply," she wrote. "The message to future secretaries of state must be that they must [not] participate in illegal schemes and that their oath is to the Constitution, not a president."

However, given that the Justice Department is run by Trump ally Attorney General Bill Barr, the chances that Pompeo or any other administration official would be indicted in the Ukraine scandal seem vanishingly small.

Others agreed, though, that Pompeo's involvement demanded consequences.

"Mike Pompeo is lying," said law professor and former chief White House ethics lawyer Richard Painter. "He was all over the Ukraine extortion. He should be impeached and removed from office."

Mirand Yaver, a political scientist, tweeted: "Mike Pompeo needs to resign. If he does not resign, he needs to be impeached."

And Neal Katyal, a former DOJ official, said of those, including Pompeo, who refuse to testify in the proceedings: "If Trump did nothing wrong, these people should come and testify. Otherwise, at least those who are currently still in office have got to resign."

They may get their wish, though Pompeo will likely never admit if he were to leave because of the scandal. Time Magazine has reported that Pompeo plans to resign his job to run for the Senate. However, the State Department has denied this report.

In addition to Pompeo's involvement in the origins of the Ukraine scandal, House Intelligence Committee Chair Adam Schiff (D-CA) also indicated on Wednesday that the secretary could be at peril for his efforts to obstruct the impeachment investigation. Under Pompeo's watch, the department has refused to hand over many documents requested in the inquiry, including records Sondland said on Wednesday that he wished he had to refresh his recollection.

"We can see why Secretary Pompeo and President Trump have made such a concerted and across the board effort to obstruct this investigation and this impeachment inquiry," Schiff said Wednesday during the hearing. "And I will just say this: They do so at their own peril."