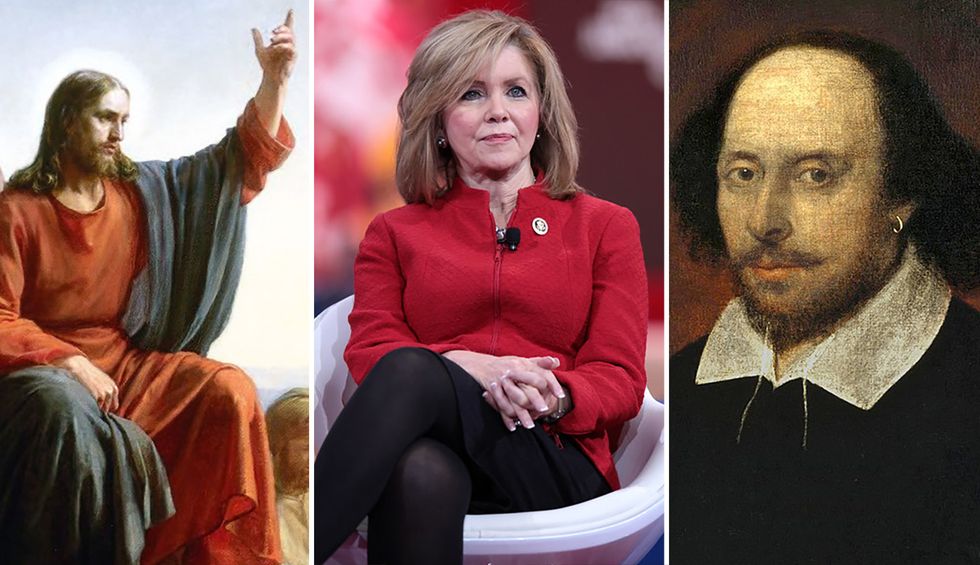 Far-right white evangelicals have been insisting that God himself sent Donald Trump to govern the United States, and Republican Sen. Marsha Blackburn of Tennessee joined them in opposing Trump’s impeachment when — in an absurd tweet posted on Sunday — she invoked Jesus’ name to make her argument.

Responding to a November 10 tweet by attorney Mark Zaid (who represents the Ukraine whistleblower), Blackburn asserted, “A 3-year, coordinated effort has been underway to remove @realDonaldTrump from office. Jesus warned us — watch out for the lawyers.”

But Twitter users have been pointing out that the comment about lawyers that Blackburn drew attention to didn’t come from Jesus but rather, from William Shakespeare — who lived long after New Testament times. Shakespeare was born in England in 1564 and died in 1616 at the age of 52.

Steve Vladeck, a law professor at the University of Texas, saw Blackburn’s tweet and responded, “It wasn’t Jesus who ‘warned us’ about the lawyers; it was Shakespeare, in Henry IV, Part II. Second, his point was that lawyers are an obstacle to a ruler who wants to consolidate government power and undermine the rule of law. Sound like anyone you know?”

A 3-year, coordinated effort has been underway to remove @realDonaldTrump from office. Jesus warned us — watch out… https://t.co/I6qOfVvfYV
— Marsha Blackburn (@Marsha Blackburn) 1573427635.0

Political blogger Charles P. Pierce also called Blackburn out, tweeting, “Senator, don’t bring Jesus into this mess to defend the most obvious heathen the country ever has elected.” And @d_mccarthy37 chastised Blackburn, “Keep telling yourself Jesus would be cool with bribery and extortion.”

@CLRo777 asserted, “Jesus warned us, watch out for the money changers. Know your bible, Marsha.” And @draiochta14 pointed out that Trump has plenty of lawyers supporting him — for example, former New York City Mayor Rudy Giuliani and Acting White House Chief of Staff Mick Mulvaney.

@VoteMarsha @realDonaldTrump That was Shakespeare. I think it was Jesus who warned us about the Republicans.
— Lisa Glass (@Lisa Glass) 1573445193.0

@VoteMarsha @realDonaldTrump No he did not. Not once. But he did warn of those who put material wealth before car… https://t.co/mSYcrp1pqK
— Just My Thoughts (@Just My Thoughts) 1573444978.0

@VoteMarsha @realDonaldTrump With all due respect, Senator, it was not Jesus, but a character named Dick the Butche… https://t.co/Wbstro3C4X
— Jennifer Taub (@Jennifer Taub) 1573432964.0

Some Twitter users are rushing to Blackburn’s defense. When journalist Soledad O’Brien tweeted that Blackburn was “confusing Jesus and Shakespeare” and was “clueless about context," The Federalist’s Sean Davis quoted Jesus as saying, “Woe to you lawyers also, for you load people with burdens hard to bear, and you yourselves do not touch the burdens with one of your fingers.” But @chriswkotner responded that Jesus was referring to “teachers of the law, not lawyers.” However, @xchixm agreed with Davis, posting, “It's either experts or lawyers in most versions of the Bible.”

Author Jonah Blank, @JonahBlank, weighed in with specifics, asserting that “there is no gospel reference to lawyers.” The people Jesus was referring to, according to Blank, were “gatekeepers of religious law” and Pharisees — not attorneys in the modern sense.

Politico’s Blake Hounshell, @blakehounshell, delved into New Testament specifics, tweeting, “I really don’t think Luke 11:46 was meant as a reference to modern-day defense attorneys, so much as it was Talmudic scholars who interpreted religious law for the masses but didn’t practice what they preached.”

Now 67, Blackburn served in the Tennessee State Senate from 1999-2003 before serving 16 years in the U.S. House of Representatives. Blackburn was first elected to the U.S. Senate in the 2018 midterms, defeating Democratic candidate Phil Bredesen.