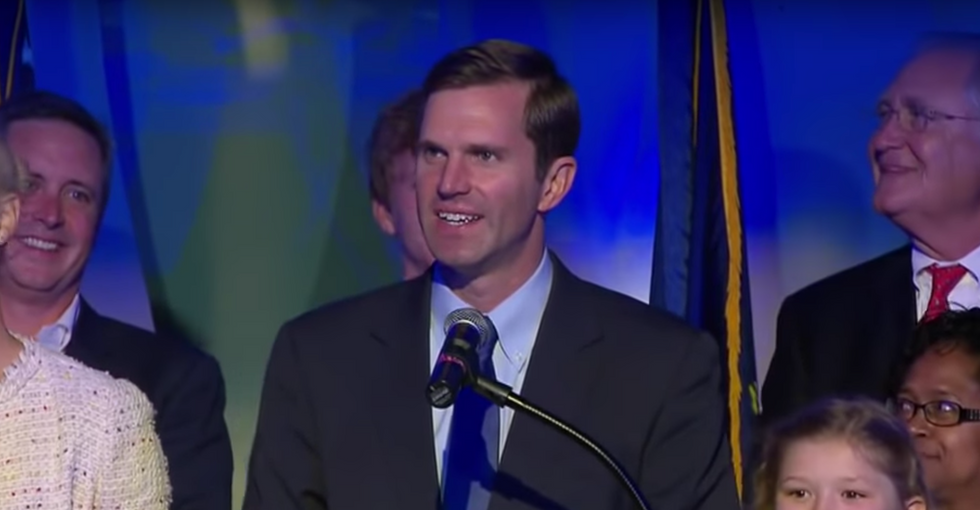 On Election Night 2019, Democrat Andy Beshear pulled off a shocking political upset when he defeated incumbent Republican Gov. Matt Bevin in Kentucky’s gubernatorial race. But it was a very close race. Bevin has yet to concede, and Republican Robert Stivers (president of the Kentucky State Senate) has suggested that Kentucky’s GOP-controlled state legislature could end up choosing Kentucky’s next governor.

Kentucky, unlike Florida, does not have automatic vote recounts in gubernatorial elections. But Bevin has the option of requesting a recount. And under Kentucky state law, a candidate has 30 days to formally contest an election’s results after they have been certified by the Kentucky Board of Elections. As of Wednesday morning, Beshear’s victory has not been certified.

The 57-year-old Stivers, the Courier Journal reported, said that according to the research of his staff, the election could ultimately come before the Kentucky State Legislature for review. And The Week notes that Section 90 of the Kentucky State Constitution says that “contested elections for governor and lieutenant governor shall be determined by both houses of the General Assembly, according to such regulations as may be established by law.”

According to the vote count on Tuesday night, Beshear won by about 5100 votes. Stivers asserted, “There’s less than one-half of 1%, as I understand, separating the governor and the attorney general. We will follow the letter of the law and what various processes determine.”

Sam Marcosson, a professor of constitutional law at the University of Louisville, told the Courier Journal that it’s a risky “proposition to suggest that the General Assembly would take vague allegations of unspecified irregularities and call into question a gubernatorial election.” And Joshua Douglas, a law professor at the University of Kentucky, told the Courier Journal that in order for the Kentucky State Legislature to review the election results, Bevin would need to call a special session of the Kentucky General Assembly; after that, a panel consisting of eight members of the Kentucky House of Representatives and three members of the Kentucky Senate “would hear evidence and make a final determination — and that determination would be final.”

Beshear’s victory is stunning in light of how Republican Kentucky is. In 2016’s presidential election, Donald Trump defeated Democrat Hillary Clinton by 3 percent in Kentucky — and Trump visited Kentucky in a last-ditch effort to save Bevin’s reelection campaign. But Bevin was deeply unpopular in his state; even so, a Democratic gubernatorial victory was a major political upset.