In a huge win for Trump, America's cynical infotainment-media conclude that impeachment is boring 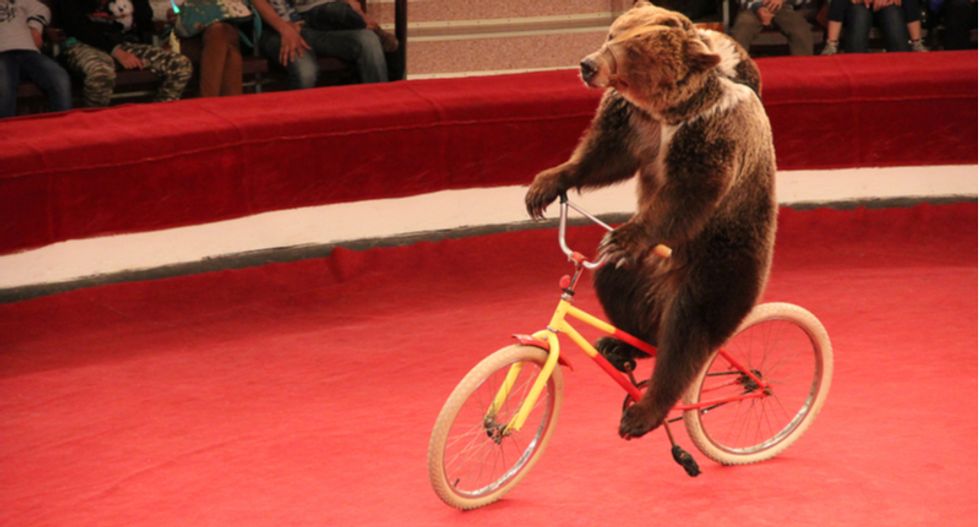 You'd be hard-pressed to find a more glaring example of the political press's inability to properly cover the unraveling of a 232-year-old democratic republic--and the efforts to defend its institutions--than the conclusion by several major news outlets that the first day of televised impeachment hearings lacked the necessary pizzazz.

Yes, the first day of testimony was "consequential." There was "substance"--new evidence that the President of the United States* personally directed that security aid to a vulnerable ally in the middle of a war be blocked in order to coerce them to pursue widely debunked conspiracy theories about his political rivals--but where was the pizzazz?

Impeachment week featured no sharks whatsoever. No nubile young women bared their breasts during the hearing and nobody in the chamber was injured in an amusing accident like on America's Funniest Home Videos. No Republican was forced by the overwhelming weight of the evidence to halt his questioning and concede that the leader of their party really is a narcissistic charlatan. Jim Jordan didn't have a sudden epiphany and tearfully apologize for turning his back on the abused wrestlers he used to coach. It was just some more boring details of high crimes in the Oval Office revealed during the fourth presidential impeachment process in the nation's history. At least Clinton's impeachment had some sex to spice up the proceedings.

These kinds of analyses are born of a deep cynicism that pervades so much of the media (I'm often guilty of it myself). It stems from the sense that, in a society as polarized as ours, nothing really matters. Opinions are locked in. Motivated reasoning leads readers and viewers to reject reporting that doesn't support their worldviews.

The Republican base won't abandon Trump and Senate Republicans fear primaries more than they do a slide into authoritarianism.  Trump isn't going to be escorted kicking and screaming from the Oval Office by the Marshal of the Supreme Court, so what's the point? Ambassador Bill Taylor and Deputy Secretary of State George Kent offered gripping some really testimony--there was substance--but we all knew how Tucker Carlson would cover it at 8 pm. Same shit, different day when you really think about it.

That's not entirely wrong. Investigative reporters sometimes unearth damning stories that bring down a politician or drive an effort for some new legislation, but most reporting doesn't change people's minds and won't change the world. But even if there's a kernel of truth to it, that cynicism blinds one to the importance of crucial moments in history like the one we're living through now, and renders one incapable of covering it with the appropriate gravity.

It's also, at least to a degree, a self-fulfilling prophecy. Most people worked yesterday and didn't catch the hearings live. They rely on the media not only for the facts, but also for cues about how to interpret them. Some of those people woke up this morning to the message that while there was some sort of substance to yesterday's, nothing interesting happened. There's nothing to see here. Move along.

This is all a huge benefit to Donald Trump. Not only does this attitude reduce politics to a battle of entertainers--where factual reality matters less than whether you can put on a good show while spinning it--it also leads to stories that might have brought down other presidencies being buried in the news cycle because everyone already knows he's mendacious and venal and self-satisfied--it's old news, and new examples probably won't get a lot of clicks.

It's the same attitude that led the mainstream press to offer a collective ho-hum this week to the emergence of leaked emails proving that US immigration policy is being driven by a virulent white supremacist. Everyone knows that Steven Miller is a bigot and everyone knows that the Trump regime routinely commits horrific human rights abuses against migrants and asylum-seekers, so how is this breaking news?

So here’s the unspoken secret about Stephen Miller’s emails. Any reporter who covered DC in 2013 (and many who did… https://t.co/RSQThNdLvo
— Meredith Shiner (@Meredith Shiner) 1573650715.0

This is how everything becomes a dog-bites-man story for our profoundly broken news media -- Trump kissing up to authoritarian strongmen and kneecapping allies; his confidants raking in millions in federal contracts; Ivanka and Jared running around making backdoor deals with foreign nations; the EPA announcing that it won't rely on science to formulate public safety rules--all of that may have substance, but where's the pizzazz?