'He got caught!': Adam Schiff gives impassioned condemnation of Trump to close out the day's hearing 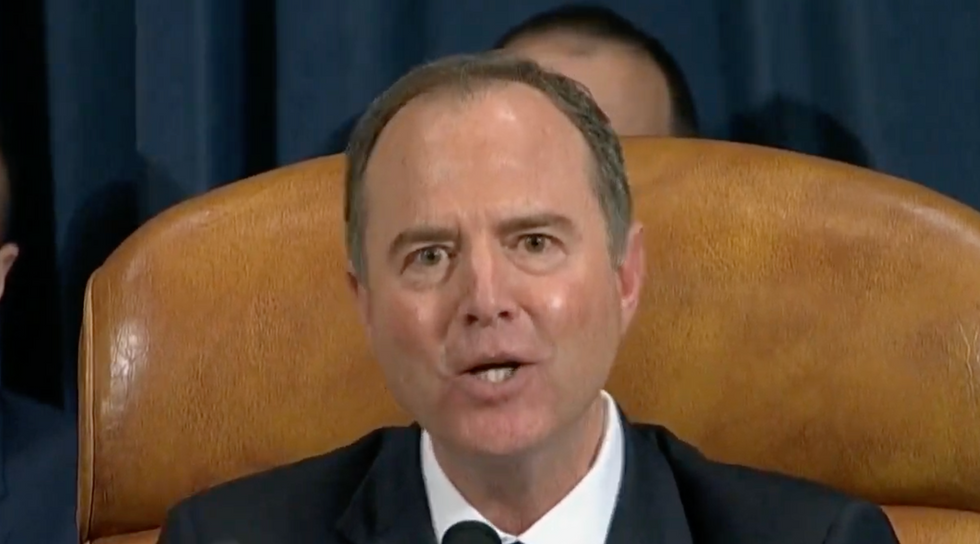 When House Speaker Nancy Pelosi was gaming out the plan for impeachment hearings, she took a somewhat surprising step by placing the Intelligence Community front and center in the proceedings as it pursues the Ukraine investigation. And on Tuesday, after a long day of testimony from four critical witnesses, Chair Adam Schiff (D-CA) delivered an impassioned speech that exemplified why Pelosi entrusted the trying task of leading the effort to him.

"You didn't get a lot of questions about [Biden] today as other witnesses did, because I think you effectively said that was also nonsense," Schiff told Volker, in a gentle broadside to his GOP colleagues. "We appreciate your candor about that."

He also noted that Morrison confirmed that the Ukrainians were told by the U.S. that they needed to announce the investigations of President Donald Trump's political opponents before they could get military aid or a White House meeting.

Then he launched into perhaps the best explanation yet of why Trump's conduct as exposed by the inquiry is so disturbing, and why the Republican defenses of the president don't hold any water.

"Bribery, for those watching at home, is the conditioning of officials acts in exchange for something of personal value," Schiff said. "The official acts we're talking about here are a White House meeting that [Ukrainian President Volodymyr] Zelensky desperately sought — and as you have acknowledged, Ambassador Volker, was deeply important to this country at war with Russia, to show that the United States had this new president's back. That meeting was important. That meeting was an official act. The military assistance is even more significant because Ukrainians are dying every day in their war with Russia. And so, the withholding of military assistance to get these investigations — which you now have acknowledged, Ambassador Volker, was wrong for the president to request — the idea of withholding that military aid to get these political investigations should be anathema, repugnant to every American."

He continued in a passionate crescendo: "Now, my Republican colleagues, all they seem to be upset about this is not that the president sought an investigation of his political rival. Not that he withheld a White House meeting and $400 million in aid we all passed on a bipartisan basis to pressure Ukraine to do those investigations. Their objection is that he got caught! Their objection is that someone blew the whistle! And they would like this whistleblower identified. And the president wants the whistleblower punished. That's their objection! Not that the president engaged in this conduct, but that he got caught! Their defense is: Well, he ended up releasing the aid. Yes, after he got caught! That doesn't make this any less odious."

Since Schiff is generally reluctant to raise his voice or show intense emotion, the passion with which he delivered these remarks made them land with even more gravity.

Watch the full remarks below: