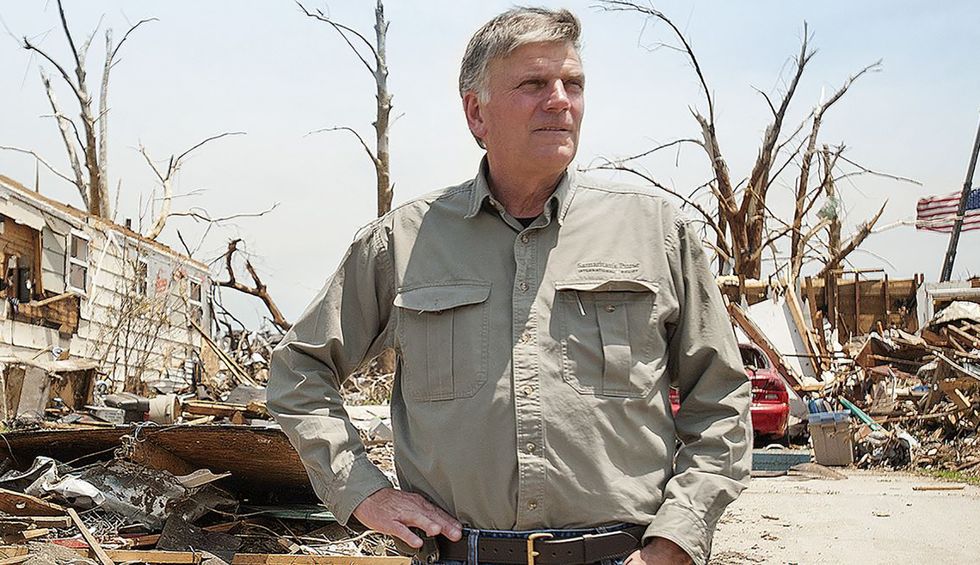 Evangelical activist Franklin Graham, who is closely tied to President Donald Trump, is once again defending the Commander-in-Chief, and once again is twisting truth into a prayerful pretzel to do so.

This may be the most consequential week yet in the 146 week-long presidency of Donald Trump.

Starting Wednesday the House Intelligence Committee will hold open hearings for three administration officials who are expected to testify on live television across major cable news channels and broadcast networks that the President of the United States of America engaged in a systematic and sustained effort of extortion and bribery in an attempt to force a U.S. ally to manufacture false evidence against his top political opponent.

The hearings will give equal time to Democrats and Republicans, and the public will be able to decide for themselves if they believe the evidence against the president warrants impeachment.

But not according to Franklin Graham, who has been using his reported $765 million evangelical empire, as The New Yorker reported last year, to become “the most vociferous evangelical ally of Donald Trump.”

Graham is defending the President to his 8 million Facebook followers by misappropriating the words of the highly respected and revered journalist Bill Moyers as a weapon against the truth.

“Long-time journalist Bill Moyers said Sunday that for the first time in his life, he fears for the nation’s survival. Why? ‘Society, a democracy, can die of too many lies…’ I agree with him 100% on that—we just don’t agree on the source of the problem,” Graham wrote on Facebook Tuesday.

“For two years day after day, night after night, we heard Russian collusion—lie after lie, pushed by the liberal media,” he claimed.

Except collusion was not investigated – criminal conspiracy was.

“There was no determination on “collusion” — and there may have been at least some evidence pointing to possible conspiracy,” The Washington Post reported after Mueller testified before Congress in July.

“Then it was Ukraine and the whistleblower,” Graham continues, apparently having not watched the news for the past month or two.

“Bill Moyers shares in the interview that his ‘hope’ is that as citizens watch the impeachment hearings (which are totally partisan), they will ‘begin to doubt’ in President Donald J. Trump so there can be a shift that would sway the 2020 election.”

To be clear again: the House hearings this week will give equal time to Republicans and Democrats alike.

It is at best inaccurate, at worst a lie to say the hearings are “totally partisan.”

“It’s all about politics and winning the election, they don’t care about anything else,” he continues, falsely.

In fact, Democrats had to be forced to begin impeachment inquiry (sadly) because they were afraid impeaching Trump could hurt them in 2020.

“They are scared to death of conservative values and threatened because President Trump can’t be pushed around and intimidated politically or personally.,” Graham claims, ignoring how the world’s dictators do just that. Dictators like Turkey’s President Erdogan, Russia’s President Putin, and North Korea’s Kim Jong-un.

(While we’re on the topic, “conservative values,” which President Trump by no means upholds, are damaging to society. As one study showed, children (regardless of sexual orientation) raised in conservative areas are more likely to attempt suicide than their peers raised in more liberal environments.)

“The lies of the progressive left and the hyper-liberal media are what is a serious threat to the future of our nation,” Graham claims, offering not an iota of proof.

Graham should look in the mirror.