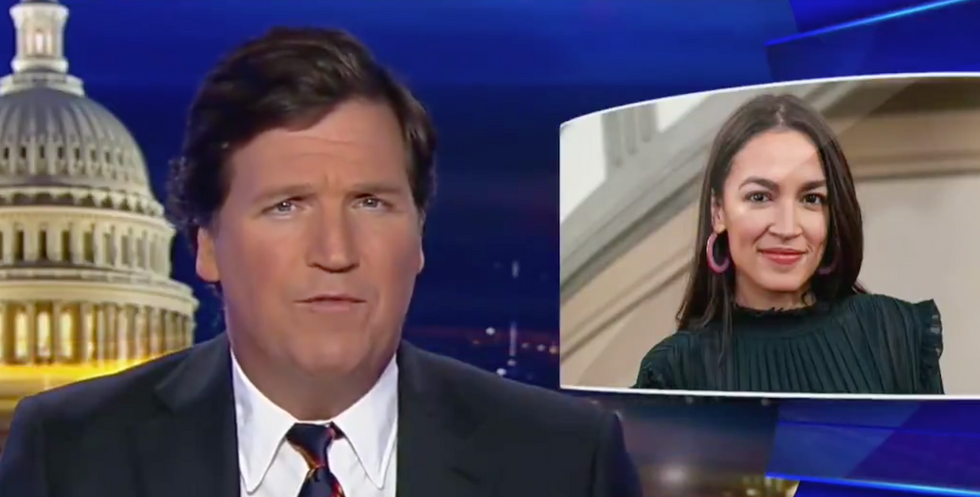 Tucker Carlson alleged that Rep. Alexandria Ocasio-Cortez, D-N.Y., was an “unapologetic bigot” who "spews racism" against white people during a Wednesday monologue on his eponymous Fox News show.

"It's terrifying to think that someone who spews open racism has become a role model for our young people, but that is exactly what has happened and has been happening since Ocasio-Cortez arrived on the public stage," Carlson said.

Referring to Ocasio-Cortez’s alleged bigotry as “pure poison,” Carlson claimed that the New York legislator attacked others “for the way they were born." Carlson’s criticisms of Ocasio-Cortez included an accusation that she had used former Rep. Joseph Crowley’s white heritage against him during the 2018 election. He also attacked the congresswoman over her comment at a recent congressional hearing on global warming that climate change was predominantly committed by white people.

During the latter event, Ocasio-Cortez noted that “predominantly white” colonizers were at least partially responsible for the sub-par response to Hurricane Maria in 2017, which led to the death of her grandfather, and asked witness Mustafa Ali of the National Wildfire Federation about the consequences of climate change for “communities of color.” (It is worth noting that China is the largest emitter of carbon in the world, a fact which Carlson did not mention in his monologue.)

"For all the hysteria you hear about how the president is a racist, Donald Trump has never said anything close to that," Carlson then claimed. "Nothing close to as bigoted and vicious as that. The people wrecking the world are all of one race? Who talks like that?"

In fact, after the president descended an escalator at Trump Tower in New York in 2015, he infamously kicked off his presidential campaign by claiming that all Mexicans crossing the border were rapists and criminals.

"When do we beat Mexico at the border? They're sending people that have lots of problems, and they're bringing those problems with us," Trump said of the Latin American country. "They're bringing drugs. They're bringing crime. They're rapists. And some, I assume, are good people."

At the same time, Carlson did not shy away Wednesday from praising Ocasio-Cortez for qualities which he acknowledged to be “impressive." He claimed that Ocasio-Cortez deserved credit for realizing that America is “dangerously unequal,” going against the Democratic Party establishment by endorsing Sen. Bernie Sanders of Vermont for president and opposing Amazon’s attempt to get tax subsidies to build a warehouse in New York City.

Carlson has a history of praising left-wing politicians when they oppose economic inequality. Earlier this year, he told Salon that “I'm with Elizabeth Warren” on the issue of making it possible to raise a family off of one parent’s income. Citing her book "The Two-Income Trap," Carlson said that “she made the case that when our society changed in such a way that it took two incomes to support a family, everybody got poorer and less happy. I agree with that.”

He later added that “if Elizabeth Warren came out and said, ‘I wrote a whole book on this, and I want our economy to support parents on one income, families on one income, not so we can hire some person from the Third World to work at minimum wage and raise your kids, but so that you can have an intact family. You can live in a way that we all know is better’ . . . If she ran on that, I would vote for Elizabeth Warren, and I would say so in public.”

You can watch the segment below: