Emmett Till nonprofit gets $10,000 in donations after white supremacists film in front of memorial, 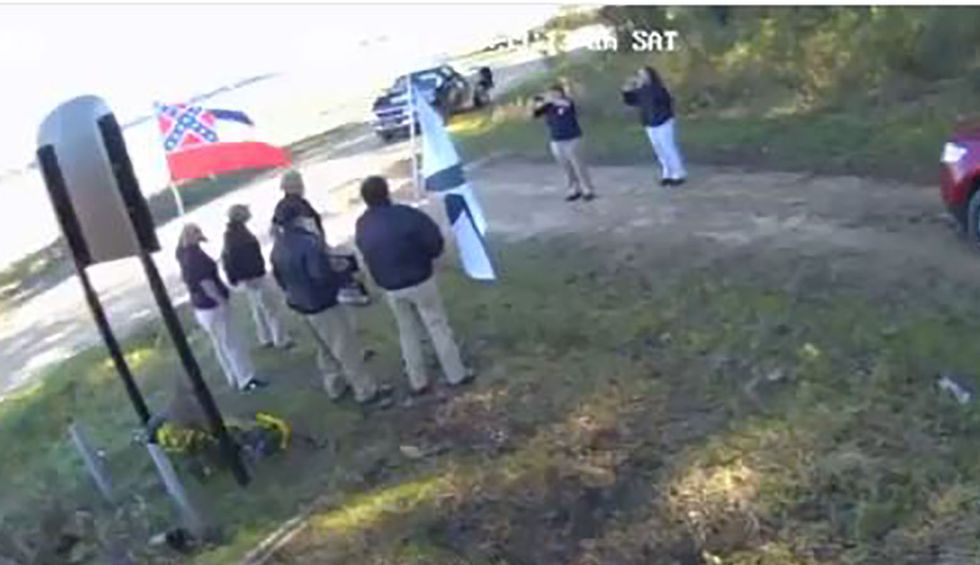 The Emmett Till Interpretive Center shared a video on Facebook of a white supremacist group standing in front of the bulletproof Emmett Till memorial in Summer, Mississippi. As Daily Kos reported at the time, the new memorial was made bulletproof after being shot and vandalized over the years.

Now, this group of white supremacists did not damage the memorial, but they did hold up a League of the South flag in front of it while filming what’s been described as a propaganda video. The League of the South, by the way, has been designated as a hate group by the Southern Poverty Law Center. It’s labeled as a neo-confederate group and its basic message is one of white supremacy.

This group also held up a Mississippi state flag, which still has a Confederate symbol in it. This group apparently also didn’t know there were security alarms because, in a second video, the group is seen scrambling back to their cars as sirens blare.

These two videos have been viewed more than one million times on Twitter.

Shortly after, members of the white supremacist org disperse & scurry to their cars after apparently setting off a… https://t.co/bqyxgRIWou
— Ashton Pittman (@Ashton Pittman)1572739553.0

In the first video, one man is heard saying, "We are all here at the Emmett Till monument that represents the civil rights movement for blacks. What we want to know is where are all of the white people."

After this horrible video went viral over the weekend, the Emmett Till Memorial Commission, a non-profit, received more than $10,000 in donations, as reported by CBS News.

“We realized that they were making a propaganda video,” Patrick Weems, director of the Emmett Till Memorial Commission, said on Sunday. “And we thought about it, thought about not telling anybody. But … we wanted to let people know that this type of thing happens.” Weems told NBC News that the surveillance system was new, and was updated when the memorial was dedicated in October.

The memorial marks where Emmett Till had been pulled from the Tallahatchie River in 1955. Fourteen-year-old Till, who was black, was brutally murdered by two white men after a white woman accused him of flirting with her; a claim which she admitted was a lie decades later. ​​​​​​Since then, memorial signage has been stolen, vandalized, and shot.