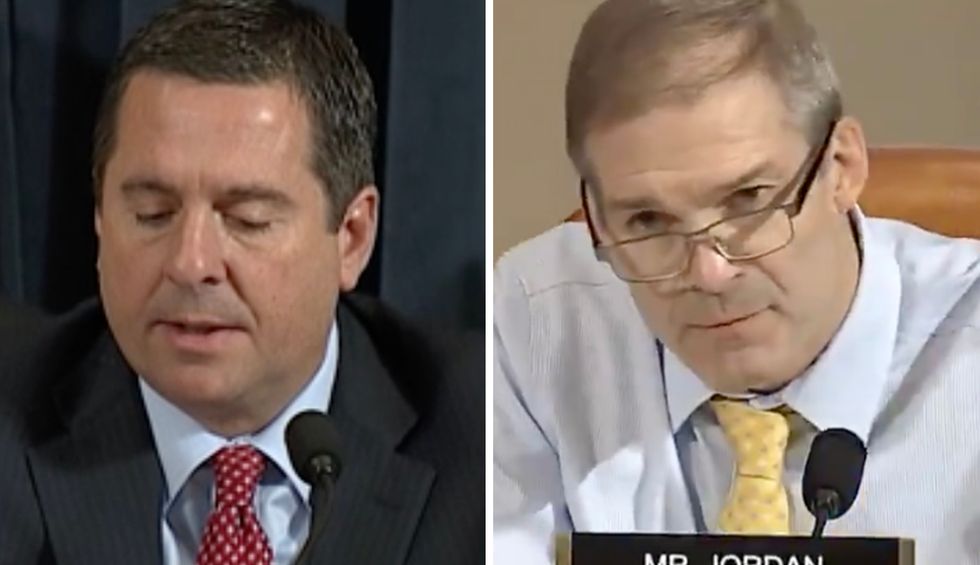 According to conservative political strategist Rick Wilson, the first day of the House impeachment hearings could hardly have gone worse for Donald Trump because his staunchest defenders — Repps. Devin Nunes (R-CA) and Jim Jordan (R-OH) thoroughly embarrassed themselves and the GOP with their nationally televised antics.

In a brutally blunt column for the Daily Beast, Wilson scorched the two lawmakers and Trump’s other “skells, sycophants, and dead-end goons on the committee” for faceplanting spectacularly on just the first day of the hearings.

Wilson got right to the point by noting that the president is likely furious about how the first day of impeachment hearings played out.

“Wednesday’s opening act of the impeachment of Donald J. Trump was only going to end one way for Trump and his defenders, and that was badly,” he began. “In the face of two credible, non-partisan witnesses of unimpeachable character and service, the Trump House Clown Caucus brought their A-game, and instead of changing the dialogue and owning the libs they managed to validate the witnesses, embarrass themselves, and doubtlessly enrage the Audience of One.”

“You could practically hear him screaming all the way down Pennsylvania Avenue as his allies’ carefully constructed tower of bullsh*t collapsed under the matter-of-fact, up-the-middle baritone recitation of his plan from men who lived through the Ukraine scandal,” he continued, adding, “Trump relied on his shriveled, impotent House caucus to destroy Taylor and Kent, and the unfocused, pathetic performances his mooks put on must have left The Donald tearing his wig out.”

According to Wilson, Nunes was comically overwhelmed as was evidenced by his opening statement that did nothing to waylay the evidence against the president.

“On just the first day of impeachment hearings, the fantasy that the Republicans on the committee, led by the comically incompetent Devin Nunes, would shift the public dialogue from Trump’s overt corruption to Biden, Burisma, and loco conspiracy theories was utterly detonated,” he wrote, suggesting, “The idea that the Republicans would make the hearing about the original whistleblower was also shattered.”

Then there was Jordan, who was roundly ridiculed for his over-the-top performance.

“Jordan, as always, was without a jacket, an appropriately knotted necktie, or a clue. His gotchas didn’t get anything, his predicates were as thin as his combover, and his belief that he’d save the day by talking louder and faster was a flop,” he wrote. “He was rattling off “questions” so fast that he sounded like an auctioneer who had discovered the joy of cocaine. That fact that other members of the committee kept throwing their remaining question time to Jordan was a sign not of confidence in him, but of their own desires to punch their questions out and resume hiding.”

“Nunes, a man no one confuses as a person with a first-, second-, or even third-class intellect, was so out of his depth and so uncomfortable that it was painful to watch,” he continued. “In the mayfly world of the Trump GOP, they act as if tomorrow will never come, and Gordon Sondland will never testify. They seem to believe that executive privilege will never be broken or the testimony of others ordered. Democrats need to emphasize that the hearsay question could be easily resolved by letting White House and State Department personnel testify.”

While noting future hearings will likely blow up in Republicans’ faces, Wilson said, from what he has seen so far, they are convincing no one and wasting their time.

“It was a bad, bad day for Trump. His defenders on the committee came in believing that keeping him, Fox News, and the Republican base happy would save the day. It won’t,” he concluded.

You can read the whole devastating piece here (subscription required).