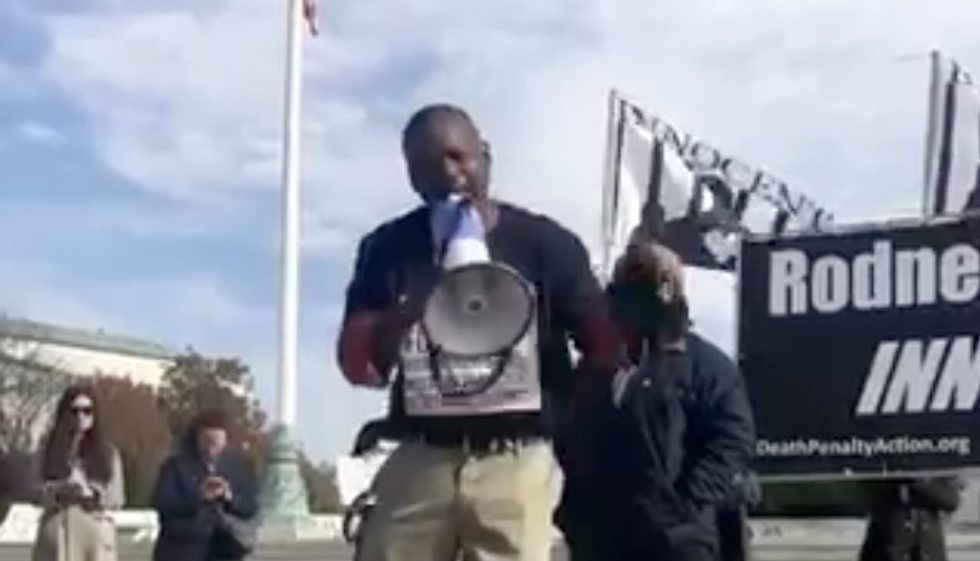 As the Supreme Court debated Friday whether to take up the case of death row inmate Rodney Reed, Amnesty International demanded that Republican Texas Gov. Greg Abbott grant clemency in the case as evidence mounts that Reed, who is scheduled to be executed in days, did not commit the crime he was convicted of two decades ago.

Amnesty has campaigned on Reed's behalf since 2015 and called on its members around the world this month to write to Abbott and demand that he arrange for Reed's retrial and exoneration in the murder and rape of Stacey Stites in 1996.

"The death penalty is applied disproportionally against people of color, and Rodney Reed's case is a glaring example," said Kristina Roth, senior program officer for Criminal Justice Programs at Amnesty International USA, in a statement. "Killing a person creates a murderer out of the executioner, is not justice for Stacey Stites, and deprives Rodney Reed of dignity and humanity: this—and every—execution is a cruel, inhuman, and degrading violation."

Amnesty and its members joined U.S. lawmakers from across the political spectrum, Texas prosecutors, supporters who have held vigils in recent days outside the U.S. Supreme Court and the Texas Governor's Mansion, and celebrities in calling for Reed's case to be retried.

On Friday afternoon, the Texas Board of Pardons and Parole unanimously voted to recommend to Abbott a 120-day reprieve for Reed.

Abbott has not spoken publicly about Reed despite the worldwide outcry.

Reed "maintains his innocence and several experts cast doubts on his conviction," the letter sent by Amnesty members to Abbott reads. "The death penalty is the ultimate denial of human rights. Since 1973, 166 people have been exonerated from U.S. death rows on innocence grounds. I urge you to recommend and grant clemency to Rodney Reed and stop his and any future executions."

New evidence in Reed's case has emerged in recent years. Witnesses have corroborated his claims that he was in a consensual sexual relationship with Stites at the time, which could explain why his DNA was found at the crime scene. Years after Reed's conviction, according to the Innocence Project, Stites's fiancé told a fellow inmate while he was in prison for the murder and rape of another women, that he had killed Stites as revenge for her relationship with Reed.

Forensic experts also dispute Stites's time of death, calling into question the timeline that implicated Reed, and advocates for Reed have noted that the murder weapon used in the crime was never DNA-tested.

"International safeguards guaranteeing the rights of those facing the death penalty state that the punishment may only be imposed when the guilt of the person charged is based upon clear and convincing evidence leaving no room for an alternative explanation of the facts," said Amnesty International. "This is clearly not the case with Rodney Reed."

Reed's family members were joined by other supporters this week at an overnight vigil outside the Supreme Court, calling on the court to take up Reed's case. Lawyers representing Reed at the Innocence Project filed a petition in September asking the high court to examine the case.

The justices were reportedly debating whether to take up the case on Friday.

"If they grant Rodney Reed a new trial, Rodney Reed will be exonerated," Rodrick Reed, Rodney's brother, said on the steps of the Supreme Court.

The Supreme Court is discussing whether or not it’s unconstitutional to execute an innocent man. Is this really a q… https://t.co/XmFnPgtRTP
— Rodney Reed (@Rodney Reed)1573832224.0