'A train wreck for the GOP:’ Legal experts blast Republican attorney’s performance during impeachment hearing as a total embarrassment 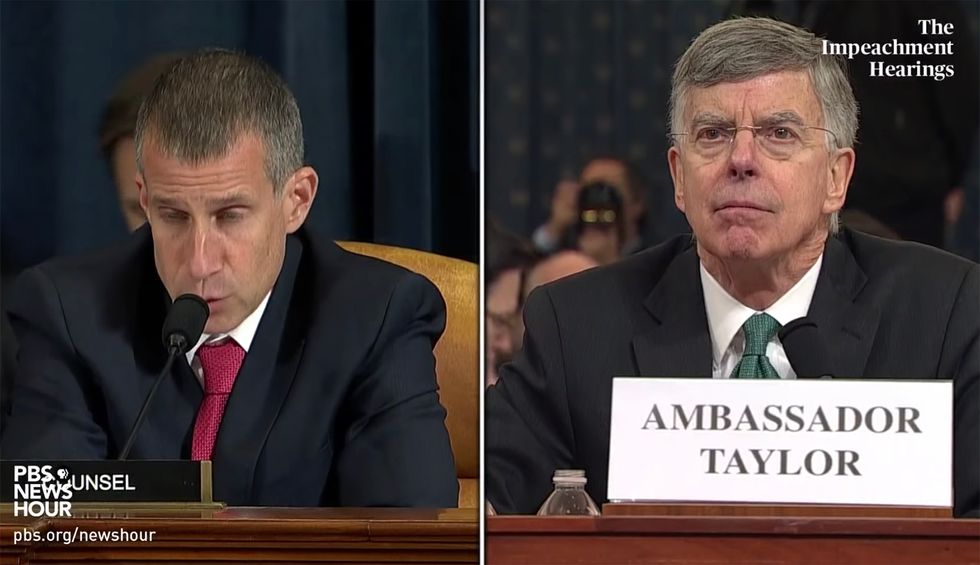 During the first public testimony in the House impeachment inquiry against President Donald Trump, one of the Republicans who questioned Ambassador William Taylor (top U.S. diplomat to Ukraine) and State Department official William Kent on Wednesday was attorney Steve Castor — who tried to discredit their testimony. But according to some well-known legal experts, he didn’t do a good job.

Trump is facing an impeachment inquiry following a whistleblower’s complaint that during a July 25 phone conversation, he tried to pressure Ukrainian President Volodymyr Zelensky into investigating former Vice President Joe Biden and his son Hunter Biden. Castor, during his questioning on Wednesday, tried to make Hunter Biden look bad because of his involvement with the Ukrainian gas company Burisma — and according to Georgetown University law professor Carrie Cordero, Castor’s Biden-related questioning was an ineffective smokescreen that offered “no actual defense” of Trump’s “abuse of office.”

In other words, Castor admitted that Giuliani’s actions on behalf of Trump were “outlandish” — which is hardly a robust defense of Trump or his allies.

What the Republican counsel’s use of much of his time on Hunter Biden and Burisma tells me, is that his members kno… https://t.co/Hlu7L4pDCC
— Carrie Cordero (@Carrie Cordero)1573669734.0

Steve Castor: "This irregular channel of diplomacy it’s not as outlandish as it could be, is that correct?” Ambass… https://t.co/bxNZvgKTZV
— CSPAN (@CSPAN)1573671011.0

Bill Taylor laughed when the GOP counsel asked him if the irregular policy channel is "not as outlandish as it coul… https://t.co/crNmrIEH0n
— Josh Dawsey (@Josh Dawsey)1573669154.0

When Asha Rangappa (a former FBI special agent) tweeted, “is Steve Castor really the best lawyer the GOP could get?,” CNN legal analyst and former federal prosecutor Renato Mariotti responded, “to be fair to him, he doesn’t have much to work with.

Susan Hennessey, executive editor of Lawfare and a legal analyst for CNN, tweeted that Castor “generally faltered” on Wednesday and “all in all….. was a train wreck for the GOP.”

Preet Bharara, a former federal prosecutor for the Southern District of New York, tweeted, “I don’t believe Mr. Castor is a former prosecutor. Does it show?” And writer Matt Naham, in an article for Law & Crime, notes that Castor “has largely worked behind the scenes for the House Oversight and Government Reform Committee since 2005.”

Castor had a few minutes in which he found his footing while drawing out Kent's concerns about Burisma. Not really… https://t.co/qPKnt8Nc02
— Susan Hennessey (@Susan Hennessey)1573669794.0

The second day of public impeachment hearings is set for this Friday, November 15, with testimony from Marie Yovanovitch (former U.S. ambassador to Ukraine).