Zucked: Early Facebook investor Roger McNamee on how the company became a threat to democracy 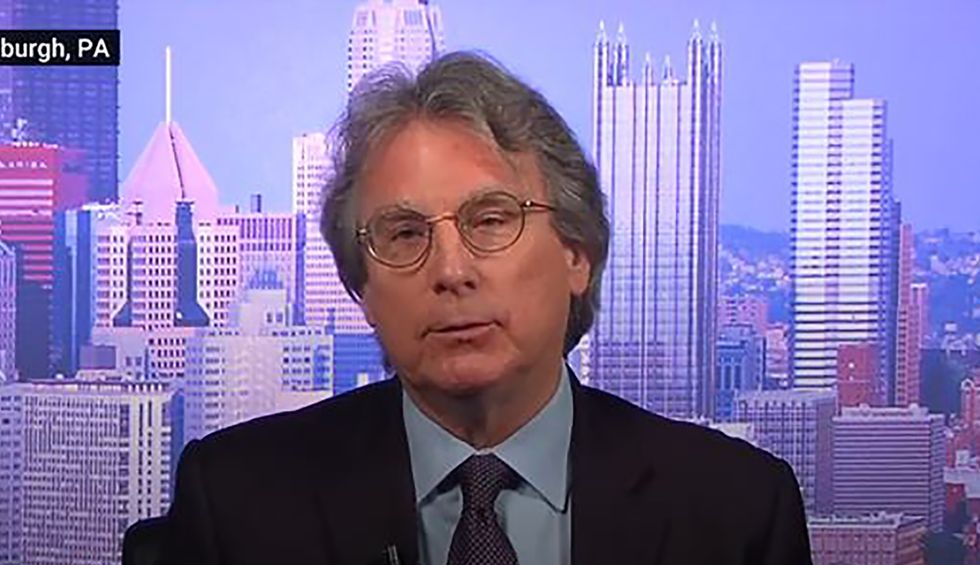 Facebook CEO Mark Zuckerberg is testifying Wednesday on Capitol Hill as his company’s actions face escalating criticism. The focus of today’s House Financial Services Committee hearing is on Facebook’s plan to launch a cryptocurrency called Libra that would reshape the world’s financial system. Meanwhile, New York Attorney General Letitia James announced Tuesday that her probe of Facebook for violating antitrust regulations is now backed by attorneys general from 47 states and territories. Facebook is also facing criticism from several Democratic presidential candidates for refusing to ban political ads from candidates containing false information. We speak with Roger McNamee, a former mentor to Mark Zuckerberg and early investor in Facebook, who has since become one of the company’s most vocal critics. His recent book is titled, “Zucked: Waking Up to the Facebook Catastrophe.”

Facebook CEO Mark Zuckerberg is testifying today on Capitol Hill as his company’s actions face escalating criticism. The focus of today’s House hearing is on Facebook’s plan to launch a cryptocurrency called Libra that could reshape the world’s financial system. Zuckerberg will reportedly tell legislators he supports delaying the launch of Libra until U.S. regulators approve it. According to his prepared remarks, Zuckerberg will say “I believe this is something that needs to get built, but I understand we’re not the ideal messenger right now. I know some people wonder whether we can be trusted to build payment services that protect consumers,” he’s apparently going to say.

Today’s hearing comes as Facebook faces intense scrutiny on a number of grounds. On Tuesday, New York Attorney General Letitia James announced that her probe of Facebook for violating antitrust regulations is now backed by attorneys general from 46 other U.S. states and territories. James said the states are “concerned that Facebook may have put consumer data at risk, reduced the quality of consumers’ choices, and increased the price of advertising.”

Well, today, we spend the hour with a man who once mentored Mark Zuckerberg and was an early investor in Facebook but has since become one of Facebook’s most vocal critics. Roger McNamee joins us from Pittsburgh. He has been an investor in Silicon Valley for over 35 years. He has advised Bill Gates, Steve Jobs and many others. Earlier this year, he published the book Zucked: Waking Up to the Facebook Catastrophe. Roger McNamee, welcome to Democracy Now! Can you start off by explaining why you call Facebook a catastrophe?

ROGER MCNAMEE: So Amy, first of all, thank you very much. It is such a privilege to be here on Democracy Now! with you today. So Facebook really simply began its life in a very innocent way, connecting friends to friends and allowing people to share what was going on in their lives. The challenge really developed when the company needed to make money, and so it began creating a business model that was based on effectively monopolizing attention. They sell advertising. They need people to watch the ads. And the way they did that was to use two things—the techniques of slot machines and propaganda that prey on the weakest elements of human psychology, and then they use smartphones, which basically were on people’s bodies 24 hours a day and created the ability to generate first habits and then later addiction.

And Facebook, along with Google and other products like Instagram and YouTube, played this game incredibly effectively. They did so at a time when there really were no rules for businesses. Essentially, the American economy has been deregulating for 40 years, and so there’s nobody watching the store. And smart people take what they can get, and the people at Facebook and Google are really smart, and they basically made a play for a global consumer internet product that would essentially touch everyone around the world and bring them into a single network and manipulate their behavior for profit.

ROGER MCNAMEE: Very simply put, the way that Facebook works—and the same would be true of Instagram and YouTube and Google search engine—they need you to spend a lot of time. And so the first thing they do is they use notifications to build a habit. Once you’re addicted, once you’re coming back multiple times a day, they have to find ways to keep you on the site. And the simplest way to do that is to reinforce whatever content gets you to share or like or comment. It turns out for most of us, the content that does that is stuff that triggers flight or fight, which is essentially a part of our psychology that is so deeply wired we can’t avoid it. The content that does that best is hate speech, disinformation, and conspiracy theories.

Effectively what happens on Facebook is they bombard you with the stuff you react to, and it blocks out all other forms of communication. So you wind up being in what is called a filter bubble, which is essentially an artificial reality where everything appears to reinforce the things you already like or the things you already believe, and it blocks out any new ideas. And in a democracy, that’s terrible, because it increases polarization. Essentially, each one of us is in our own Truman Show, and if we are not careful, we wind up having our own set of facts.

And you see this every day. I mean, one third of Americans do not believe there is any relationship between human activity and climate change. That is demonstrably false. There’s another 7% or 8% who believe there is a linkage between vaccination and autism, which is clearly not true. Well, in a democracy, if you can’t agree on the facts, you can’t have debate, you can’t have compromise. And Facebook has played a larger role than any other platform at increasing this polarization. They have had a lot of help from YouTube and Instagram, but Facebook has been the one that has done it worst.

AMY GOODMAN: And why a threat to public health?

ROGER MCNAMEE: So on public health, there’s a bunch of different things going on in public health. Quite obviously, if people live in a fantasy world, if they live in a Truman Show and they are angry all the time, if people are constantly being bombarded with stuff that triggers fear or outrage, that’s just not going to be good for their mental health.

But let’s think about children. You have huge issues on products like Instagram with bullying and body shaming. We have seen a very mysterious but alarming increase in teen suicide and it has been suggested that there may be a link to social media in terms of increasing that pressure at this very vulnerable time in children’s lives. And then obviously, there are products that Facebook has, and that especially Google and Microsoft have, that are aimed at really little kids. So Microsoft has Minecraft, Facebook has Messenger for kids, and Google has Chromebooks and all of their educational products. And those things are designed essentially to train really little kids for this world of surveillance that is so core to the business model of Internet platforms.

AMY GOODMAN: In a moment, we’re going to talk about how you came to know Mark Zuckerberg and Sheryl Sandberg, what you said to them, your advice, the direction they’re going in today, the significance of his testifying on Capitol Hill, talking also about cryptocurrency. But I just wanted to get your comment on the latest news that 47 states and U.S. territories are now joining with New York investigating Facebook, charging it with antitrust violations.

ROGER MCNAMEE: This is a really important initiative. If you had asked me two years ago whether I thought it was likely that we would see antitrust action against Google or Facebook, I would have said it was very, very unlikely. Essentially, the Republican Party has had as a core strategy to dismantle antitrust as one of the government’s functions as the arbiter of capitalism, and so we’ve reduced the opportunities for antitrust to something so small that effectively it appeared that internet platforms like Google and Facebook would be untouchable. In reality, they commit antitrust violations every single day.

And the good news is that state attorneys general are in a position to act on this because many states have privacy laws. Many of them have consumer protection laws that these companies have violated every single day. And we see 47 states and territories going after Facebook. We see 50 going after Google. This is incredibly welcome. It’s incredibly important. This is the very beginning of a process that is likely to take several years, but in my opinion, this is the most likely antitrust venue to have success in. And I think it is super important that it work, because these companies act as though they are not accountable to anybody, and in that context, they do great harm and escape any kind of punishment for it. And that just is wrong.

AMY GOODMAN: We’re going to break, and when we come back, we want to find out exactly how you got Zucked—how you met Mark Zuckerberg and the evolution of that relationship along with the evolution of Facebook. We are talking to Roger McNamee. He’s the author of Zucked: Waking Up to the Facebook Catastrophe. He has had a 34-year career in Silicon Valley, was an early investor in Facebook. Stay with us.