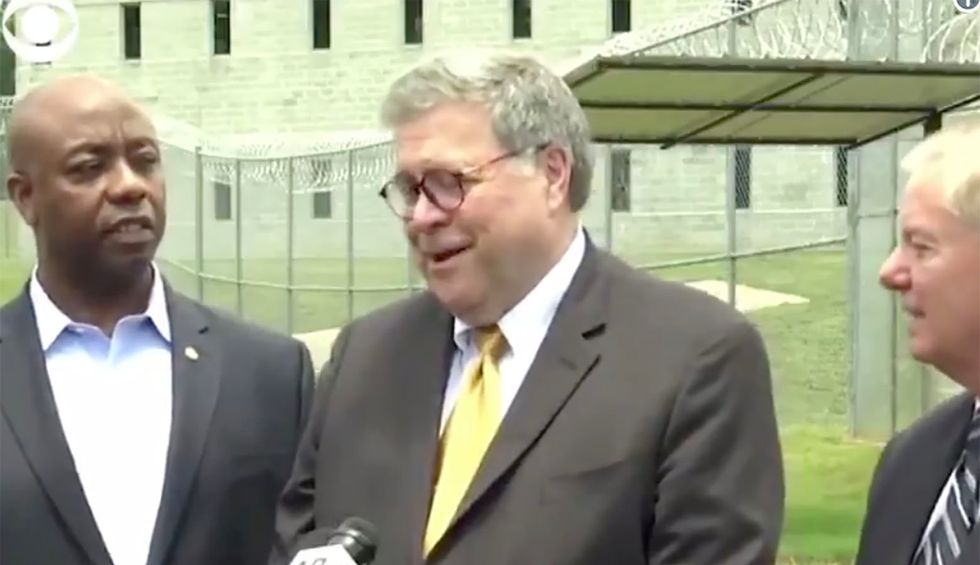 On Monday, the wall surrounding Donald Trump’s actions to use foreign governments to undercut American intelligence didn’t just crack—it collapsed. In the space of a few hours, it became clear that Trump had leaned on the Australian prime minister to work with Attorney General William Barr in an effort to discredit American intelligence agencies and undercut the conclusion that Russia was responsible for interference in the 2016 election. Even more extraordinarily, it wasn’t Trump who came up with the idea of going to a foreign government for help in discrediting America’s own agencies and leveling the national reputation. That suggestion came from Barr.

And Barr’s dishonor down under wasn’t a one-off event. It was soon confirmed that he had also reached out to Italy, asking it for help. Help in replacing facts with conspiracy theories. Help with exonerating Vladimir Putin. Help in destroying the reputations, lives, and careers of the people who work in his own department. And then Barr made the same play to the U.K.

Against that background, it seemed completely unsurprising to learn that staff lawyers working for the House of Representatives believe that Barr’s clamping down on the Mueller report and placing the report under an indefensible claim of executive privilege wasn’t just another flexing of White House muscle. Because it now seems that what Barr is hiding under his privilege claim and the black smears of grand jury redactions is that Trump lied to investigators about contacts between his campaign and WikiLeaks.

Then, on a day when it was once again achingly clear that Barr would not just lie for Trump, not just hide information for Trump, but would wreck the nation’s own law enforcement apparatus while doing untold damage to the national interest, there came a topper for it all: Late on Monday evening, the Justice Department announced that it would be joining the lawsuit currently being conducted in the state of New York by Trump over subpoenas for his tax returns.

The DOJ is not joining on the side of the state, of course, but on the side of Trump. Even though Trump is entered into the lawsuit as a private citizen, U.S. attorneys will be joining the claim against the Manhattan district attorney and defending Trump’s refusal to hand over his tax forms—in violation of state law. Maybe this is what Trump meant by a civil war: He’s launched Barr into a war with a state to protect the secrets hiding in Trump’s taxes.

Every good comic book villain needs a henchman, and Donald Trump found his in William Barr. The Constitution sets strict bounds on what can be viewed as treason. Barr seems determined to test those bounds.

Federal prosecutors provided no reason why they should be entering this case. The only claim in their letter to the court is that turning over Trump’s taxes could “potentially implicate the interests of the United States.” Because for all purposes within the DOJ, Trump and the nation are one and the same.

Before Barr came along, Trump had been somewhat stifled in his attempts to remake the Department of Justice into a tool he could effectively use to both shield himself and slap around his enemies. Even a staff composed of the most partisan and pliable people Trump could locate—and no one is more partisan than Jeff Sessions or more jelly-spined than Rod Rosenstein—couldn’t quite give him what he wanted, because they were still saddled with holding on to a few outdated concepts like law and democracy. Barr changed that.

From the moment Barr arrived, he made it clear that he was Trump’s instrument and that the Justice Department was his to control. He demeaned Robert Mueller, dismissed his legal conclusions, and wrote a “summary” of the investigation’s findings that waved away hundreds of contacts with Russian officials and repeated efforts to obstruct the investigation.

Then, despite an already open inspector general investigation into the origins of the Russia matter, Barr launched a second investigation, setting up his own team to hack away at the analysts, prosecutors, and investigators who had blindly thought they were protected simply because they were doing the right thing. And when that wasn’t enough, Barr told Trump to go afield—to put him in touch with Australia and Italy and the U.K. so that he could personally collect information to flip not just the idea that there had been a reason to investigate Trump’s campaign, but to dispute the finding that Russia ever set out to help Trump to begin with.

Barr isn’t just destroying the Department of Justice; he’s annihilating the concept of justice. And the extent to which he’s been successful is easily measured by the fact that there is no one standing by to take Barr, or Rudy Giuliani, into custody for his actions.