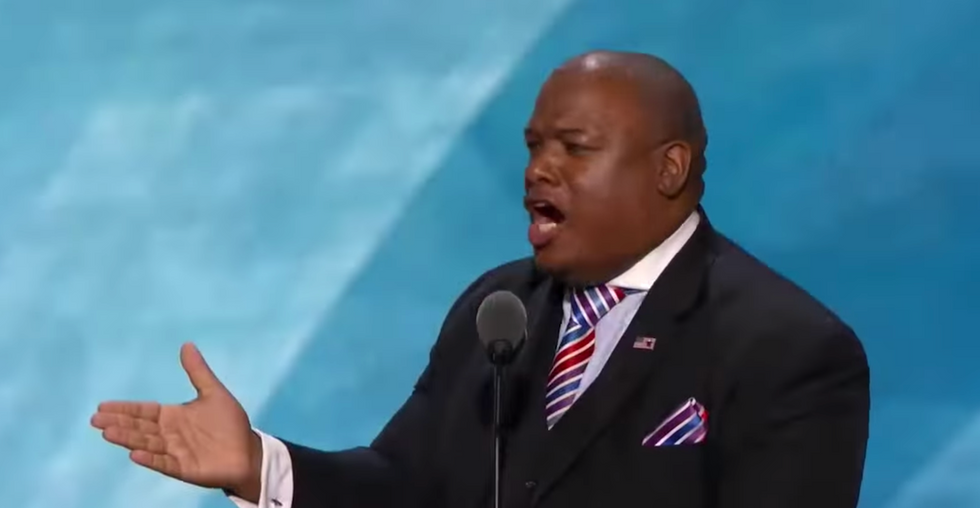 On Sunday, news broke that a video of a fake President Donald Trump massacring journalists and others had been shown during a conference at one of the president’s resorts last week.

The video was swiftly condemned by the White House, the organizers of the pro-Trump conference, as well as Donald Trump Jr. and Sarah Huckabee Sanders, who both spoke at the event.

“Regardless of political party, we should all reject any and all violence in our politics,” Trump Jr. said in a statement.

But the now-infamous video was far from the only violent imagery and rhetoric at the conference, which was held at the Trump National Doral Miami. One of the speakers at the conference opening repeatedly urged the crowd to go to “war” in support of Trump.

Burns went on: “Do I have anybody who is ready to go to war for Donald J. Trump, for this nation? I can’t hear you? Anybody? Ready to go to war! Because we’re citizens of the greatest country in the world!” The audience cheered.

Hyperpartisan rhetoric, including references to violence, has become a staple of the president’s campaign and his supporters. Trump himself has egged on crowds with nods to violence.

In response to questions, Burns said he does not endorse violence: “Me talking about going to war for Donald Trump is simply a call to action for Republicans to be verbal in support of our conservative values and support for this president.”

Later during the conference, radio host Wayne Allyn Root proudly recalled punching classmates as one of the few white students at his predominantly black high school. A “kid comes up to me and I knock him unconscious. Second kid, a week later, I knocked his entire front row of teeth out. He’s on the floor going ‘where are my teeth, where are my teeth,’” Root told the crowd. “My buddies and I were high-fiving and laughing. Man, it was funny.”

Root then connected the beatings to politics: “To win in politics, which is the roughest game in the world, you’ve got to be a natural-born killer. Not a wallflower. You’ve got to be a pitbull.”

We recorded the comments at the conference as part of our “Trump, Inc.” reporting project and podcast.

Asked for comment, Root said he was simply defending himself. “I don’t recommend violence to anybody, ever,” he said. Asked by whom he was attacked, Root said it was “black students and Italian rough students.”

Burns and Root have both long campaigned in support of Trump. Burns gave the benediction on the first day of the 2016 Republican National Convention in Cleveland, for which he drew criticism for referring to Democrats as “the enemy.” Root also campaigned for Trump during the last election, saying he looked forward to supporters taking over the capital with “pitchforks, jack hammers and blowtorches.” (The Trump campaign declared Roots’ comments “completely unacceptable.”)

In between sessions, men milled about wearing shirts popular with the extreme right-wing group Proud Boys. One of the shirts read, “Yamaguchi did nothing wrong.” Otoya Yamaguchi was a Japanese ultranationalist who murdered the head of Japan’s socialist party. The back of the shirt shows an image of the killing.

Asked for comment, White House spokesman Steven Groves sent an email asserting his responses were “off the record” (we did not agree to this) and saying we should, “Make sure to include Obama and Biden’s violent rhetoric as well.” He did not reply to a request for examples of Obama or Biden using such rhetoric. (Biden has said he would “beat the hell” out of Trump if they were high school classmates, a comment Biden later said he regretted.)

Trump Jr. and Sanders did not immediately respond to requests for comment.

After the video became public, conference organizer Alex Phillips said the media was ignoring the fact that there had been a panel titled “Political Violence.” That panel focused on left-wing protesters known as Antifa.

Phillips did not respond to our request for comment. A spokeswoman for the conference gave the following statement: “The conference was managed in a professional manner with attention to important areas, reputation and relationships. We’ve had amazing media support and attendance and to have any form of violence come from this conference is not only shocking, it’s a sad time for us all.”