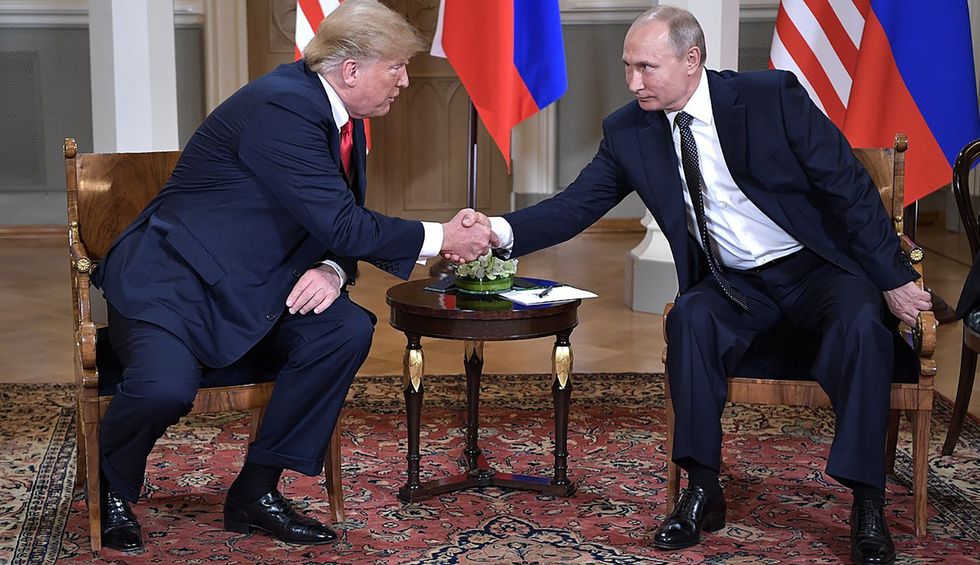 In July of 2018, when Donald Trump and Vladimir Putin met in Helsinki, most people were simply gobsmacked by Trump’s obsequious attitude, how he looked to the Russian autocrat before answering any question, and his overall impression of astounding weakness. But Putin not only swaggered to the podium with assurance, he brought with him a list. A list of things that he and Trump had discussed as targets for future action. The nature of the list wasn’t perfectly clear for American audiences, but Daily Beast Russian Media Analyst Julia Davis helpfully translated the items clutched between Putin’s fingers as he stood confidently next to Trump.

That may seem to be a decade ago, but amazingly it’s been just a little more than a year since one man left that conference looking defeated and the other smiled all the way home. And check, check, double-check with an underline, those items certainly were addressed.

Davis was able to decipher a bit of text related to each of these items. “Interference”—which really was in quotes—came next to the word “proposal.” Whether that means Putin was offering a proposal on how to stop interference, or how to increase it, is open to interpretation.

On the Ukraine item, there was also a mention of “new ideas” and “transit of gas.” Which could have hinted at a scheme to route Russian gas, especially since another of the clear areas of the text mentions the “Nord Stream 2 pipeline.” But it’s worth noting that Burisma, the company where Hunter Biden was on the board, was a gas company. In other words, Putin’s competition.

Finally, the Syria item comes with a nice little explainer about “joint humanitarian efforts.” So all is good there. Unless, of course, those humanitarian efforts are directed at how Europe will deal with the 11,000 ISIS fighters that Trump wants to push their way.

The really scary thing—the visible page is just what Putin was showing the camera out of a clipped-together bundle.